Race and diversity are important features in societies. Learn the definitions of race and ethnicity, recognize how these relate to nationality, and understand the differences between social minorities and social majorities. Explore racial and ethnic trends in the United States. Updated: 12/28/2021
Create an account

If I asked you to tell me your race, what would you say? How about if I asked you for your ethnicity? What about your nationality? How are these concepts different from each other? When you think about your answers, are the groups you fit into considered a 'majority' or a 'minority' in your country and culture?

Throughout the history of humanity, people have put value on these categories and made meaning out of them. This lesson is going to cover concepts including race, ethnicity, majority versus minority status, and current trends in the United States regarding racial patterns of change. 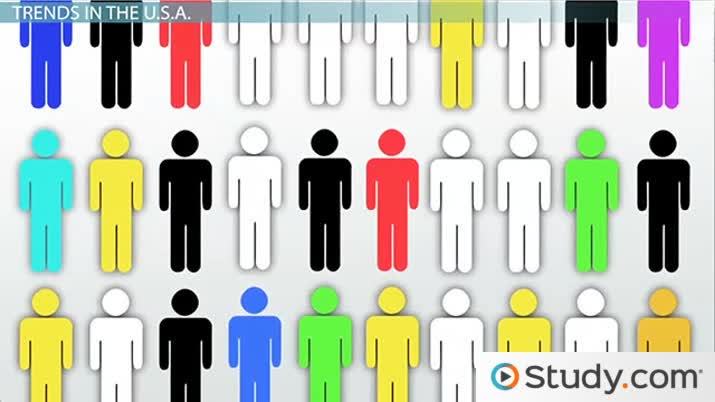 Let's start by making a distinction between the concepts of 'race' and 'ethnicity.' Some people get confused about what the difference is, or they may not even be sure if there is a difference between these two ideas.

First, the definition of race is a socially meaningful category of people who share biologically transmitted traits that are obvious and considered important. This definition has several parts to it, so let's break it down. First, we said that race is a 'meaningful category of people.' Different races are groups that are simply made up by people who decided that they are important. Examples include 'Caucasian,' 'African American,' and 'Asian.'

Another part of the definition was 'who share biologically transmitted traits.' Really, for race, this means skin color. Skin color also usually has other stereotypical traits that go with it, such as hair color, certain facial features (like the size of your nose or the color of your eyes), height, and so on. But for most cultures, skin color seems to be the most important trait when it comes to race.

So what is ethnicity? In contrast to the idea of race, ethnicity simply means a shared cultural heritage. So ethnicity could be 'Egyptian,' 'Swedish,' 'Mexican,' or 'Jewish.' The ethnicity of 'Jewish' is interesting because it refers to both a particular group of people from a biological, genetic perspective, but it also refers to a religion and all of the cultural richness that comes from that religious tradition. Many other ethnicities share both genetic traits and, often, religious or cultural holidays or traditions that tie the group together.

Another way that these concepts can be complicated is by trying to divide people up into the categories of 'majority' versus 'minority' status. Let's try to define these two concepts.

When we're talking about race, ethnicity, gender, religion, or any other socially meaningful group of people, the majority refers to the social group considered to have the most power in a particular place (and sometimes the most members). In the United States, white, or Caucasian, people are considered to be the racial majority group. White people have historically been the most powerful race in terms of representation in the media, business positions (like owning companies), or representation in politics.

Majority groups are often statistical majorities, meaning the group with the most people, but that is not always true. For example, when it comes to gender, men are considered to be the majority group in the United States because they have more social power than women. However, from a pure numbers perspective, there are a slightly higher number of women than men. So even though there are technically more women in the United States, women are still considered a minority group because they are a group with less social resources and power. Okay - if that's true, maybe the next step is that we should define what exactly we mean when we talk about a social 'minority.'

The definition of a social minority is any category of people distinguished by either a physical or cultural difference that a society has subordinated. Let's break that definition down into two pieces because there are two basic criteria or rules that a group needs to meet in order to be considered a minority.

The first criterion, or rule, is that a minority group has to have a distinctive identity. This means that people need to be able to spot them or categorize them easily. Minorities could be based on skin color, like race, or by biological sex, like men versus women. Minorities can also be based on religion, which is often distinguished by the way someone dresses or from accessories they wear, such as a Star of David necklace, indicating Judaism. Or a minority could be based on choices, such as vegetarians who don't believe in eating meat and who take an active role in demonstrations and other activities to promote the wrongs of eating meat to others.

The second criterion, or rule, to make a group fit into the 'minority' category is that the group has to experience social subordination. Social subordination is the idea that, in general, members of this group have fewer resources or less power than the majority group. Minority groups usually have lower incomes, jobs with less prestige, less representation in government, limited schooling, and so on. While some members of the group might be wealthy or powerful, most members are not. For example, Jennifer Lopez is certainly a beautiful, respected millionaire; however, in general, Puerto Rican Americans are considered an ethnic minority.

Trends in the U.S.A.

The final topic for this lesson is just a few of the basic trends we see happening in the United States relevant to race and ethnicity. The current situation is that non-Hispanic white people are considered the racial majority group in the U.S.A. However, we see trends indicating that the proportion of minorities is increasing. In 2010, there were four states that had more people who are considered in the racial minority living there than non-Hispanic white people; these states were California, Hawaii, New Mexico, and Texas.

According to the U.S. Census Bureau, if current trends continue, by the year 2042, the combined groups of all racial minorities will be larger than the number of whites in the U.S. That doesn't necessarily mean that any single group will be bigger than the number of white people; it just means that, statistically, there will be fewer white people than everyone else combined. What do you think that will mean for our future? Will we have more TV shows and movies that feature other races? Will we continue to see presidents who are people of color? Will road signs and schools start to use more than one language? If you live in the U.S., how will these changes affect you personally?

In summary, this lesson first defined the difference between race and ethnicity. Race is a socially meaningful category of people who share biologically transmitted traits that are obvious and considered important. In contrast, ethnicity means a shared cultural heritage. In short, race is based on biology, while ethnicity is based on culture.

Next, we made a distinction between social majorities versus minorities. The majority is the social group considered to have the most power in a particular place (and sometimes the most members). On the other hand, a minority is any category of people distinguished by either physical or cultural difference that a society has subordinated. The two criteria required to make a group considered a social minority is (1) a distinctive identity and (2) subordination.

Finally, we talked a bit about current trends in the United States and that in the next thirty years or so, there will be more racial minorities living in the U.S. than white people. The next two generations of Americans will certainly be living in interesting times!

At the end of the video, you will be able to:

Interactions Between Social Majorities and Minorities