The Race Riots of the Civil Rights movement were violent incidents of racial tension erupting between demonstrators and opposing groups. Identify the social conditions leading to the riots, the events of 1964, and riots in 1967 and 1968. Updated: 11/10/2021
Create an account

Social Conditions Leading to the Riots

During the 1960s, the whole country was faced with the question of civil rights. Groups had marched on cities from Selma to Washington, and there was a real moral dilemma about how to proceed. Along the way, Southern lawmakers seemed determined to block legislation that would give minority groups more influence.

However, during the 1960s, several tipping points were reached. Starting with the conflicts in the summer of 1964 and ending with the assassination of Martin Luther King Jr., this new wave of protests had the potential to turn violent quickly, especially when outside forces agitated the situation. In addition, the events occurring during these protests did much to alter the state of minority group relations in the United States. 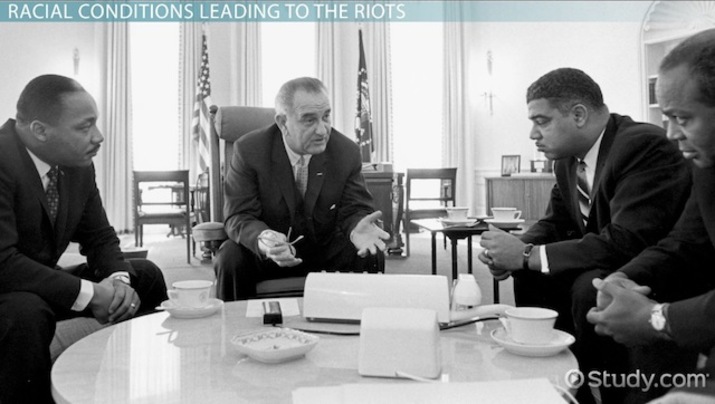 Coming up next: The Assassination of Martin Luther King Jr.

The first of the major conflicts to break out in 1964 happened in one of the most important Black neighborhoods in the country, Harlem. Here, a police officer shot a 15-year-old boy, allegedly in self-defense. Different versions of the events came from each of the several witnesses to the incident, and within hours, hundreds of protesters were on the streets, carrying pictures of the slain student.

Over the next six days, peaceful protests turned into destructive uprisings when a few agitators began vandalizing and looting throughout Harlem. The situation was inflamed when police responded in kind with violence and chaos quickly erupted. Halfway through the disturbance, the local police began to work with the NAACP, the National Association for the Advancement of Colored Persons, to limit further destruction while still making sure that the issues were addressed. However, agitators such as the Black Nationalists, a group that sought to solve the Civil Rights question through violence, had begun to work the crowd as well. Finally, the police had to provide protection for the NAACP from the Black Nationalists and those they inspired to riot.

Philadelphia and Rochester were also scenes of violence that summer. In Philadelphia, steps had been taken to improve the relationship between the police and African American communities. Police had started to patrol in pairs of one white officer and one Black officer, but even that was not enough to end friction. An attempt to resolve a domestic dispute led to rumors that a white officer had killed a Black pregnant woman, leading to violence in the streets.

Again, groups like the NAACP pleaded with Black Nationalists for peaceful protests. Unlike Philadelphia, Rochester had no such history of trying to resolve racial conflict. In fact, the city had been dragging its feet on making many suggested improvements. Ultimately, it was the first situation in which the National Guard had to be used to quell a minority group disturbance outside of the South—it would not be the last.

In August of 1964, another case of civil unrest burst open in the major American city of Los Angeles. Again, the preexisting tensions of systemic racism, long-held inequality and discrimination, high unemployment, unmet grievances, and the subpar efforts of local governments to solve these problems contributed to the fiery response of the Black community. A simple traffic stop and arrest of a Black woman quickly transformed into the Watts Riots, also called the Watts Rebellion. Once again, the National Guard was called in to prevent further damage. More than anything, the Watts Riots reinforced the truth that social tensions between white and Black citizens were not necessarily confined to the Old South or to old manufacturing towns but also found in America's fastest-growing cities.

A few years later, protests turned violent once again in Detroit. The same reasons of discrimination, poverty, and lack of opportunity were expressed as the reasons for the protests and ensuing violence. However, these riots took a turn for the worse. Local dignitaries, ranging from congressmen to baseball players, all tried to calm the revolt, but none were successful.

As a result, more than 12,000 troops, including almost 5,000 Regular Army paratroopers, were sent into the city to stop the destruction. It was later rumored that they found themselves pinned down by rioting snipers upon arrival. While the actual incidents of snipers may have been blown out of proportion, the fear of such indiscriminate violence forever scarred the city of Detroit.

Still, the worst of the violence was yet to come. In April of 1968, Martin Luther King Jr. was assassinated outside of his Memphis hotel room. As news spread across the country, many cities began to revolt. After all, King had been the leader of the nonviolent movement that had gained much of what the African American community had worked so hard to achieve.

His murder was an attack on the movement itself. More than a dozen cities had riots, but two in particular did not. In New York City, remembering the violence of only a few years before, the mayor drove into Harlem and spoke publicly with African American leaders about the need for increasing funding to decrease poverty and what they could do to work together.

However, the much more famous speech took place in Indianapolis, where Robert Kennedy was campaigning for president. Despite being warned that local police could not guarantee his safety, he stood on the bed of a truck and spoke calmly to the people gathered. After all, he said his brother, too, had been killed by a white man, and while anger and hatred were the natural emotions, they didn't ease the pain. After hearing Kennedy's short remarks, the crowd went home peacefully.

While the 1960s were a time of great social change, they were also a time of great social unrest with many riots. For the first time, these protests and ensuing riots consumed areas outside of the South, requiring the use of the National Guard and federal troops in California, New York, and Michigan. With the death of Martin Luther King, Jr., more social unrest and riots spread. However, politicians making genuine appeals in New York City and Indianapolis helped contain the threat of violence in those cities.

Once you've learned about the race riots of the 1960s via this lesson, see if you can:

The Ethics of Migration Policies

What is Melodrama? | Melodrama Examples in Theatre

The Core Principles of American Government

Propaganda Types & Examples | What is Propaganda?

Equality Examples & Types | What is Equality?

What are the Articles of Confederation? | Summary & Purpose