Kenneth has a JD, practiced law for over 10 years, and has taught criminal justice courses as a full-time instructor.

Raffaele Garofalo was a renowned Italian criminologist and a student of Cesare Lombroso, the father of modern criminology. Learn more about Garofalo's assertion that humans have uncontrollable psychological traits that cause them to commit crimes and his contributions to anthropological criminology. Updated: 01/19/2022
Create an account

Criminology is the study of crime and punishment. The theories of criminology can be divided into two period-driven categories. Classical criminology, which became popular in the 1700s, suggests that humans have free will and make rational choices to commit crimes. Punishment should have proportionality, which means the greater the crime, the harsher the punishment. Also, punishment is a natural response to crime, and deterrence is a secondary goal.

Modern criminology, which took prominence in the 1800s, rejects the notion of free will. Rather crime is a result of factors that place the will outside of proper conduct. Modern criminology theories, also called positivist theories, say that through reason, rationality, and science, humans can learn the truth of their behavior and then fashion a response to crime that can bring about tranquility and order. Morality and abstract reasoning should be replaced by empiricism, which is the use of reason, knowledge, and experimental investigations to discover life's truths. 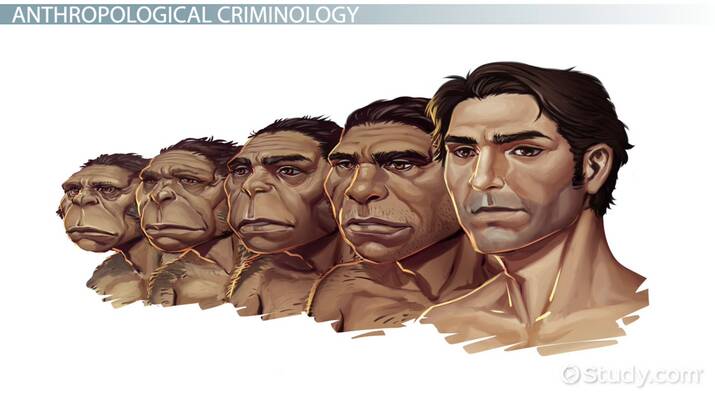 Considered by many as the father of modern criminology since he was a pioneer in using science to connect to crime, Cesare Lombroso was heavily influenced by the theory of evolution by Charles Darwin that was published in Europe in the 1860s. This is commonly named Darwinism. The theory says humans evolved from animals through a process of mutations and natural selection. Lombroso applied Darwin's theory to the ideas of crime causation. Eventually he produced a working theory, called anthropological criminology, based on the concept of atavism. Atavism says criminals are members of society that have regressed in their evolutionary advancement as evidenced by certain physical traits.

It didn't just end with atavism though. Lombroso had a student that was heavily inspired by his ideas. This is where Raffaele Garofalo came in.

Born in 1851 in Naples Italy, Raffaele Garofalo became one of Italy's leading criminologists. As mentioned before, Garofalo was a student of Cesare Lombroso. Like his mentor, Raffaele Garofalo rejected the classical view of free will saying that criminals were slaves to impulses out of their control. However, Garofalo, like many of his contemporary criminologists, didn't accept his teacher's view regarding physical traits (e.g., big forehead or large head), rather he linked criminal behavior to a defect in their physiological make up. Garofalo worked as a magistrate in the Italian court system, served as a senator, and eventually became the Minister of Justice in 1903. This intimate view of the workings of the justice system gave Garofalo an unprecedented perspective to the problem of crime and punishment.

As evidence of this criminal deviation, Garofalo defined crime, not as a violation of a law, but as a violation of nature. An act was a crime if it violated human nature in either of two forms: probity, which is honesty and integrity, or pity, which is compassion for others. These acts that violated nature were mala in se (evil in themselves). Other acts that broke the law but were absent the violation of human nature were, mala prohibita (technical violation of the law). The technical violations of the law can be dealt with by changing the law or a civil fine. However, acts against humanity must be dealt with harshly to protect society.

Garofalo rejected the classical view that punishment should be proportional. For each crime, the individual should be examined. If that person violated the natural laws of probity and pity, then they should be ''eliminated.'' If they broke a technical offense, then no serious punishment was warranted. Garofalo created the Law of Adaption as a means for eliminating those natural law violators.

He suggested three means of elimination:

In cases of youth or special circumstances where outside pressures influenced the conduct, then a lighter sentence as there exists likelihood that criminal behavior won't continue.

He listed three societal benefits of his Law of Adaption:

All right, let's take a moment or two to review what we've learned. Criminology, the study of crime and the search for its causation, can be divided into two groups. First, the classical theories, which state that humans have free will, and criminal behavior is a result of bad choices, which can be corrected through proportional punishment, with proportional punishment meaning more severe crimes get harsher punishments. Second, modern criminology, which rejects free will and suggests that through reason, rationality, and science, society can understand the causation of crime and formulate the proper response. Its backbone was that of empiricism, which is the use of reason, knowledge, and experimental investigations to discover life's truths. Finally, there was anthropological criminology, a creation of Cesare Lombroso, which states that humans that have physical traits such as overly large forehead, a big head, or asymmetry of head or faces, were indications of atavism and criminal behavior, with atavism being evolutionary regression.

Raffaele Garofalo, a pupil of Lombroso, a magistrate, senator, eventually the Minister of Justice, and most importantly one of Italy's leading criminologists likewise rejected the concept of free will and proportionalism. Instead of the physical trait linkage his teacher developed, Garofalo suggested that humans exhibit psychological traits, outside of their control, that made them commit crimes. He defined crime as those acts that violated human nature in two forms: probity, which is honesty and integrity, or pity, which is compassion for others. Either violation exposed a deficiency in a person who should be punished under his Law of Adaption, which proposed to eliminate the deficiency in one of three ways: death, imprisonment or isolation, or reparation.

Criminology History & Theories | What is Criminology?

Somatotype Overview & Theory | What Is Somatotype?