If people only see you as a part of a race, and not as an individual, are you still a person? In this lesson, we'll analyze Ralph Ellison's important and critically acclaimed novel, 'Invisible Man.' Updated: 01/15/2020
Create an account

Invisible Man is Ralph Ellison's 1952 novel about race in America.

Ellison was the grandson of slaves. He attended the Tuskegee Institute, which was founded by Booker T. Washington. He both studied and played jazz, which informed the improvisational style of Invisible Man. He then moved to Harlem, where he befriended people like Langston Hughes and Richard Wright.

The novel won the National Book Award in 1953 and is regarded as one of the greatest American novels of all time. Amazingly, this was Ellison's first and only novel published during his life. One more novel, Juneteenth, was published after his death. 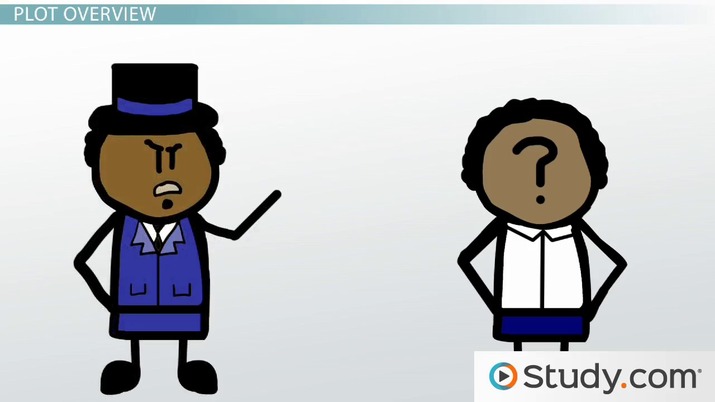 Coming up next: Richard Wright's Black Boy: Summary and Analysis

The story is told by an unnamed African American narrator. This is the title's invisible man. He says:

Why don't people see him? Because of their prejudices and racism. It's fitting, then, that we never learn his name.

The story is a Bildungsroman, which means it tells about his formative years. As a symbol of his invisibility, he's writing his story while living underground. He lives in a shut-off part of the basement of a whites-only building in New York. Though he's underground, his space is illuminated by 1,369 lights, which he says makes it perhaps the brightest place in the city.

Let me start by noting that this novel's breadth is significant. This brief plot overview touches on the key points.

In the late 1920s or early '30s, the narrator is a young man in the South. He's a gifted orator, which leads to him speaking before a group of his community's leading white men. Yet he ends up being forced into a battle royal with other young black men, where they're all blindfolded and told to viciously fight. They're then humiliated when the men place money on the ground and they must lunge across an electrified rug for it.

Later, the narrator is at college. He's employed as a driver for Mr. Norton, a white trustee. Norton is superficially supportive, but truly condescending. At Norton's request, the narrator drives Norton through the most downtrodden black areas of the town, including a visit to Jim Trueblood. He's a poor, uneducated local black man who impregnated his own daughter. Norton never sees the narrator as an actual person - it's one of the many instances of the narrator being 'invisible.'

After his misadventures with Norton, the narrator is chastised by Dr. Bledsoe, the college president. Bledsoe, it turns out, has risen to power by manipulating white people's understanding of him. He's played a role that serves his purposes, rather than being true to himself.

After college, the narrator ends up in Harlem working at Liberty Paints. Here, they manufacture white paint by adding a black substance to it. They say: 'Our white is so white you can paint a chunka coal and you'd have to crack it open with a sledgehammer to prove it wasn't white clear through.'

If your symbolism warning lights are going nuts right now, they should be. People want to cover up anything non-white with white paint that's dependent on black ingredients and black workers.

Later, the narrator is recruited as a speaker for the Brotherhood. This is an interracial social activism group. To join, the narrator has to change his name, live in an apartment they provide and basically completely start his life anew.

Life in the Brotherhood is mostly good for a while, but soon friction between the black and white members emerges. The narrator meets Ras the Exhorter, a black nationalist and strong opponent of the Brotherhood. Ras believes that black people cannot possibly work with white people. They must fight for their rights themselves, even if it means violence against whites.

The narrator decides to subvert the Brotherhood by seducing Sybil, a woman close to a party leader, and getting information from her. But Sybil has no information and, as it turns out, she wants the narrator to fulfill a fantasy of hers - being raped by a black man.

While with Sybil, the narrator gets called to Harlem. Ras has started a riot. In the chaos, the narrator is chased by the police. He falls down a manhole, which is how he ends up living underground.

He concludes the story by noting that it's time for him to be true to his own self and not the community. If he can do that, he can emerge from the underground.

The major theme of Invisible Man is the effect of racism on individual identity. The narrator cannot escape getting lumped into a stereotype. People see the narrator as what they want him to be, whether it's the degrading image of the white men who force him to fight in the battle royal or the role of token black orator for the Brotherhood.

Within the black community, there are similar problems. At the college, there are allusions to Booker T. Washington and the argument that black people should ingratiate themselves to white society. Then there's Ras the Exhorter, who is reminiscent of the separatist ideology of Marcus Garvey. Both extremes are reductive and fail the narrator in his quest to be an individual.

In summary, Ralph Ellison's Invisible Man is a masterpiece about an unnamed narrator and his formative years in early 20th-century America. It explores the effects of racism and ideology, including how they severely cripple the narrator's ability to carve out his own identity.

When this lesson is over, you may be able to: