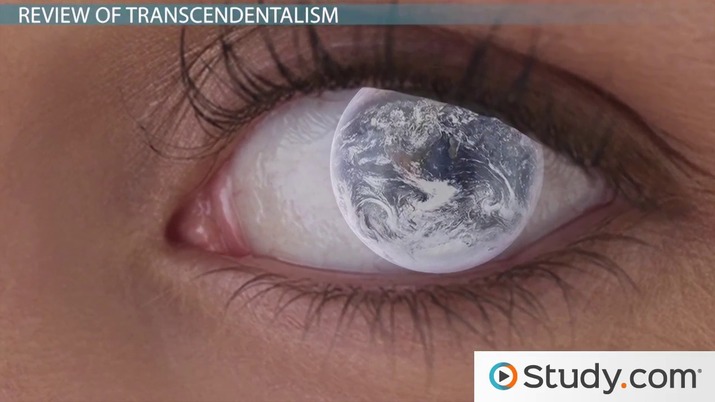 Coming up next: The American Scholar by Ralph Waldo Emerson: Summary & Analysis

In 1836, a small group of New England writers and intellectuals founded a literary and philosophical movement known as transcendentalism. The group rejected organized religion; they believed one should develop a personal, intuitive relationship with god and nature. By contemplating nature, one could transcend the physical world and unite with the 'Over-Soul,' the true energy of the universe. Along with Emerson, transcendentalism influenced the work of writers Henry David Thoreau, Walt Whitman, and Emily Dickinson.

The transcendentalists championed individualism, which is the practice of independence in thought and action based on the premise that individual character and personality are of the utmost importance. Accordingly, individuals are free to pursue their goals and private desires without taking into consideration the interests of society. This idea greatly shaped America's identity.

From the lone cowboy who seeks vengeance without any regard for the long arm of the law, to someone like Lady Gaga, who pursues success while staying true to her unique creativity and personal style, Emerson believed that diversity enriched society. He encouraged American artists to develop distinctive styles rather than looking to the European past masters of literature, art, and architecture.

Within 'Self-Reliance,' Emerson urged readers to 'trust thyself: every heart vibrates to that iron string.' Emerson also suggested children as models of authentic behavior in 'Self-Reliance.' While man was 'clapped into jail by his consciousness,' children were still free with themselves, always genuine and natural. Children were too young to be hesitant. In contrast, adults often became wary of following their true nature.

Emerson encouraged readers of 'Self-Reliance' to resist conforming to societal expectations. He wrote, 'Whoso would be a man, must be a nonconformist.' Emerson believed that man needed to act independently, regardless of if his impulses were deemed good or bad. In fact, he believed it was better to live a true life in obscurity than to be praised for abiding society's standards.

To be clear, Emerson's intent was not for people to become hermits, fenced off from their community with their unique ideas kept in solitude. Unlike his contemporary, Emily Dickinson, who was known for her reclusive tendencies, Emerson argued that independent energy and creativity were essential contributions to society. The transcendentalists stressed the importance of thinking for one's self rather than timidly accepting the common opinion.

Emerson believed that truth was found within, and that this internal truth transcended the knowledge gained from one's senses. In 'Self-Reliance,' he stressed the importance of intuition, which is the ability to understand something from instinctive feeling rather than conscious reasoning.

'Self-Reliance' argued that intuition is the 'the essence of genius, of virtue, of life.' The transcendentalists believed that the universe was guided by an all-encompassing and vital energy called the 'Over-Soul.' When man felt the spark of intuition, he tapped into this 'Over-Soul.' His sudden knowledge had been sent straight from the source. Intuition was the only direct knowledge, according to Emerson. All other knowledge was secondhand.

Society devalued intuition, Emerson argued. People were encouraged to conform, to gather their ideas from books rather than experience. Emerson believed, however, that America needed to hear the voices of self-reliant, intuitive individuals.

In particular, Emerson believed that self-reliant individuals were needed within the social spheres of religion, culture, the arts, and society. To revitalize religion, Emerson encouraged man to remember his oneness with god. Man, nature, and the universe were all in perfect unity. With this notion held in the heart, every action became prayer.

Rather than subscribing to the idea that one needs to be well-traveled to be cultured, Emerson argued that 'the wise man stays at home.' Travel often disguised one's desire to stand still. A traveler may arrive on the shores of another country only to find that her problems, her opinions, and her worldviews have traveled with her. She isn't changed or moved by what she sees. Emerson explained that the key to real growth was letting one's mind roam freely.

In regards to art, Emerson criticized the educational system for teaching students to imitate. He encouraged artists to be true to themselves, to express their uniquely American visions.

Lastly, Emerson argued that society does not necessarily benefit from progress. Technological advances result in the loss of earlier knowledge. When a man owns a watch, he no longer needs to learn to tell time by the position of the sun. When he can jump into a car, he no longer walks. Emerson believed that technological improvements occurred without any correlating intellectual or spiritual improvements for humankind. He compared society to a wave, washing in and out against the shore, but not truly advancing.

In summary, Ralph Waldo Emerson was a key figure in the literary and philosophical movement known as transcendentalism. His essay, 'Self-Reliance', was published in 1841 and has since become Emerson's most famous work. 'Self-Reliance' helped to shape American identity with these three transcendental ideas:

'Self-Reliance' challenged Americans to trust their own unique powers and think for themselves. Emerson and his fellow transcendentalists argued that only the self-reliant, intuitive individual was capable of effecting positive and innovative change.

Into the Wild & Transcendentalism