Rapid population growth may result in the consequences of too little food and too few resources. Explore what occurs when populations grow too fast and learn about state methods and natural methods to reduce population. Updated: 11/15/2021
Create an account

There is no doubt that the population of the world is growing very rapidly. A few decades ago, there were barely two billion people on the planet. Within a few short years, the world's population will reach eight billion, while countries like India and China deal with having more than a billion residents each. Instability in global food supplies, pollution, and a lack of resources have also increased over that time period, and there are concerns that those issues are not getting any better. 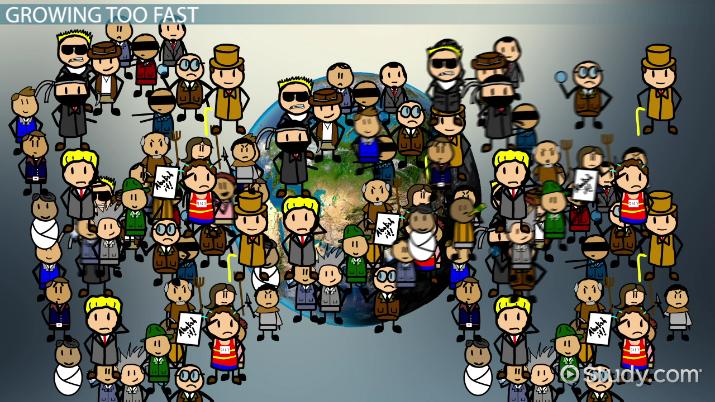 Try it now
Back
Coming up next: Family Planning: Definition, Programs & Efficacy

One of the most common fears about overpopulation is running out of food. After all, you can't create more land, and with the exception of a few hydroponic crops grown in water, you need land to grow food. However, it's important that we temper our fears here. History has shown that humanity will find ways to overcome issues of scarcity when it comes to food if given the proper motivation and enough time. We saw this in the past century with the creation of both artificial fertilizer and crops bred to produce higher yields. In many ways, our current population explosion is catching up with those new limits.

What can happen is short-term food scarcity, and sadly, this is far too common. This is especially true in poorer states. Few of us probably know the price of bread off the top of our heads. This is because we really don't have to think about it due to economic prosperity. We know that we can buy a store-brand loaf for around a dollar or two, or spend more for other breads. If the store goes from one dollar to two dollars for a loaf of their white bread, we don't think of it much. Meanwhile, families struggling on fewer than two dollars a day in developing countries definitely feel that crush.

What we in the United States definitely will know the price of is gasoline. For those of us who don't have public transit options, gas prices are a definite fact of life. In fact, they are a great way of looking at how short-term and long-term scarcities affect goods as well. Instability in the Middle East or an oil platform's ruin may drive prices up in the short term, while a peace deal or normal operation could cause them to drop. However, hard as it is to believe, over the long term and adjusted for inflation, gas is actually cheaper than it has been in the past.

This is because humanity can adjust for scarcities in the long term better than those in the short term. Just like food shortages, energy companies innovated. The current oil sands growth in places like Canada and North Dakota is a great example of this. In the past, oil sands were thought to be not worthwhile to pursue, but now the technology exists to make such work profitable. The same proves true for other sources of energy. Solar power and wind energy have only now become profitable due to more advanced technology, as well as increased demand both now and in the future.

Other countries have employed less extreme official methods, but none have seen the drops of China. Instead, market forces have taken over in rich countries to slow population growth. Simply put, women are deciding to focus on careers, further education, or really anything other than having large families. As a result, many developed countries have small birth rates, with several below two children per woman. In short, those countries are shrinking.

At the opening of the lesson, I said that it was a good thing that humanity is starting to slow its growth. Again, it's not that we couldn't support a larger population, it's just that populations have growing pains when they expand. For example, famines are widespread scarcities of food that can be caused by many things, like being unable to grow enough crops during a drought. A famine for a well-supplied population wouldn't cause much suffering, but a population that has no surplus in normal times would suffer greatly.

Additionally, disease outbreaks affect densely populated regions. Think about it like this - as the world becomes more populated, some areas become very overcrowded. When there is overcrowding, sanitation and hygiene begin to suffer. Where are you more likely to catch the common cold, a bus with only one person on it who happens to have the cold, or a very crowded bus where the germs can freely move from person to person? The same reasoning applies to other diseases as well.

In this lesson, we looked at the consequences of rapid population growth. Contrary to what many think, it is not long-term issues of resources and food that are the danger but instead short-term shortages. Still, short-term shortages can end a government, so states and societies work to limit their birthrates. This is for the best, because natural methods like disease and famine cause considerably more suffering than a lower birth rate.

What is Geography? | Types & Examples

What is Peace Education? - Objectives & Importance