Dawn has taught chemistry and forensic courses at the college level for 9 years. She has a PhD in Chemistry and is an author of peer reviewed publications in chemistry.

View bio
In chemistry, acids react differently with metals, carbonates, and hydroxides. See examples of all three outlining their appearance, and chemical equations as well. Updated: 01/11/2022
Create an account

What Is an Acid?

What's chemistry without combining a bunch of stuff together, right? One of the most exciting reactions in chemistry involves acids, which are substances with a pH of less than 7. Contrast this with bases, which have a pH greater than 7.

Buckle your seatbelt, because we are going to conduct reactions that cause fizzling, bubbling, and heating. Let's get started with the following reactions: 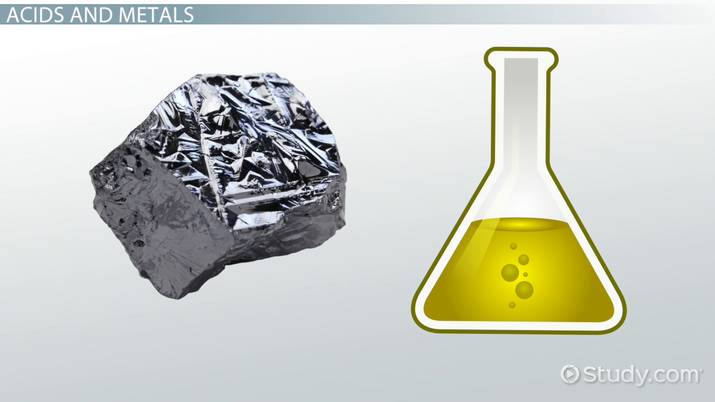 Coming up next: Redox (Oxidation-Reduction) Reactions: Definitions and Examples

The first group of reactions we'll discuss is when a metal and an acid are combined. The general reaction results in a salt and hydrogen gas. Not all metals react this way, but many do.

For each type of reaction, the balanced equation, which means the number of atoms on the reactant side (left side of the arrow) equals the number of atoms on the product side (right side of the arrow), will be shown. The full ionic equation, which shows the ions (or charged atoms) in an aqueous solution (when a material is dissolved in water) will also be shown.

The reaction of magnesium with hydrochloric acid produces magnesium chloride (a salt) and hydrogen gas.

The balanced equation is as follows:

You'll notice letters in parenthesis next to the element's symbols. This just shows you the state the element is in:

When this reaction takes place, the hydrogen gas causes bubbles and the reaction creates heat. This reaction is known as a single displacement reaction, because the magnesium displaces (and replaces) another element (hydrogen).

Now let's check out the ionic equation. Sometimes a net ionic equation is used, and this means that the ions that are the same on both sides will be crossed off. Here, we'll just present the entire equation:

For our second example, let's see what happens when iron is mixed with sulfuric acid. Here iron and sulfuric acid result in iron sulfate (a salt) and hydrogen gas. Take a look at the balanced equation:

Again, bubbles from the hydrogen gas are formed and the reaction releases heat. Just like the first reaction, this is a single displacement reaction (iron displaces hydrogen).

Let's move on to acids and carbonates. A carbonate is negatively charged and contains a carbon bonded to three oxygen atoms. The general reaction results in a salt, carbon dioxide gas, and water.

The reactions between carbonates and acids are called neutralization reactions because the acid is neutralized. In other words, the acid and the base (carbonate) are neutralized, or their pH gets close to 7.

If you've ever taken Tums to deal with stomach acid, you have experienced this reaction firsthand. Tums contains carbonate, which neutralizes the acid in your stomach. And if you burp, guess why? Yep, the reaction creates gas and this causes you to burp.

Let's look at another example. When magnesium carbonate reacts with hydrochloric acid it produces magnesium chloride (salt), water, and carbon dioxide. The balanced equation is:

Like the other reactions, bubbles are produced (this time due to the carbon dioxide) and heat is released.

The ionic equation is:

And you guessed it, since there's a gas produced (carbon dioxide), bubbles appear. And, like the other reactions, heat is released.

The ionic equation is:

The last group we'll focus on is the reaction with an acid and a hydroxide. A hydroxide is negatively charged and contains a hydrogen and oxygen atom. Like the carbonates and acid reactions, these are neutralization reactions. The hydroxides are bases. The typical reaction results in salt and water.

The first reaction we'll look at is the reaction of hydrochloric acid and sodium hydroxide, which results in sodium chloride (salt) and water.

The balanced equation is:

You may notice that no gases are formed, so there are no bubbles. However, heat is still released.

In this final reaction, potassium hydroxide and nitric acid will form potassium nitrate (salt) and water. The balanced equation is:

Like the other hydroxide reaction, no bubbles are formed; however, it will heat up.

The following exercises will give you more practice in writing and understanding chemical reactions involving acids. This includes understanding balanced equations as well as ionic equations. The solutions are included below to check your work.

Acids react with a metal to produce a salt. Write balanced equations for the following acidic reactions.

Acids react with bases to form a neutralization reaction which results in a salt and water. Write the balanced chemical equations for the following reactants.

6. What are some everyday uses for acid-base reactions or examples of neutralization reactions in real-world applications?

6. Antacids are basic tablets that can be used to neutralize stomach acids. They are available over the counter. Calcium oxide is used as a base to reduce the acidity of plants. This is used for farming and gardening.

What is Acid in Chemistry? - Definition & Overview

Rate of a Chemical Reaction: Effect of Temperature

The Steady State Theory vs. the Big Bang Theory

Effect of Catalysts on Rates of Reaction