LeRon Haire is an education professional with over 5 years experience in higher education within the University System of Georgia. Haire has received an MBA with a marketing undergraduate concentration and has the Georgia Assessments for the Certification of Educators, certified in Business Management.

In this lesson, we'll define and compare the terms reactive and proactive public relations, discuss why they're important, and look at some examples of the two types. Updated: 04/03/2020
Create an account

Proactive public relations refers to the ability of an organization to take control of the PR message that's being relayed to the general public and aim to get the word out before anything bad can occur. 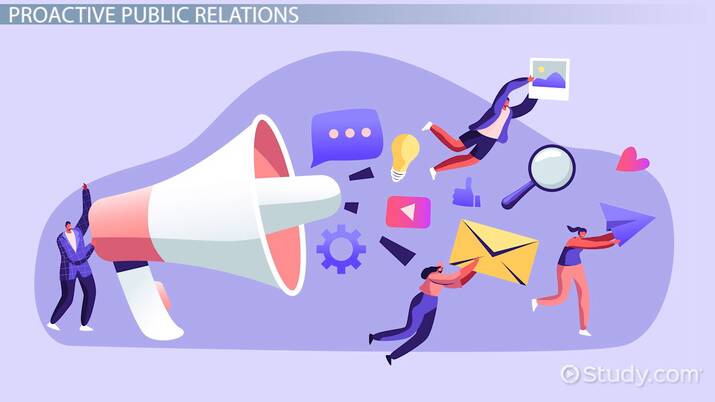 Strengthens the Image of the Organization

The general public typically perceives proactive public relations messages as more credible than any advertisements that are paid for. For example, when there is an ad placed in a newspaper, many individuals feel as if the newspaper is simply advertising the message because they have been paid to do so by an organization. A message that is delivered by a news reporter or journalist is perceived as more credible because there was no money paid for it to be delivered.

For an example of proactive public relations, let's look at a fast-food chain that prepares healthy meals to go. The establishment can be proactive by describing their fresh and healthy ingredients in commercials as well as listing a nutritional guide to their meals upon entering the establishment. Any customer that enters the fast-food establishment is able to look on the wall or over the counter to see the nutritional information of the meal that they are choosing.

Let's now take a look at some of the characteristics which make reactive public relations important as a tool in marketing and advertising.

Helps Organizations Prepare for the Unexpected

It's difficult for organizations to predict what will happen or how they will be perceived in the eyes of the general public. For this reason, reactive public relations is a vital tool, which can help organizations prepare as much as possible for these types of events. Successful organizations will develop a contingency plan and unveil it in the event that negative publicity or adversity is to occur.

Helps Organizations to Learn and Adjust on the Fly

It Shows That an Organization Is Listening

When reacting to a public relations fiasco or negative event, the general public can see that the organization is listening to their demands and trying to solve their problems. For example, let's say that a beverage company introduces a banana-flavored cola beverage that the general public does not like. The organization can use reactive public relations to either discontinue the product or perhaps make adjustments to it as recommended by the public. This will show the public that the organization is being reactive and listening to the demands of their consumers.

An example of an organization responding to reactive public relations would be an oil company coming out to promote environmental health just shortly after an oil spill occurs on their watch in one of the major oceans.

Which of the following is an example of proactive public relations?

What are HR Metrics? - Definition & Types

Why Companies Use Public Relations

What Is Public Relations? - Definition & Examples