World War II changed quite a lot in American society. In this lesson, we'll see how the United States attempted to adjust to all of this change, both at home and abroad.
Create an account

We often see 1945 as the end of World War II. However, Americans of 1945 weren't just faced with readjusting and recovering from a four-year conflict, they were recovering from nearly 20 years of depression. The end of WWII represented the final end of the Great Depression and the chance for Americans to prove that their economy had recovered enough to survive in peacetime. There were a lot of changes Americans had to adjust to, and they were excited to do it. 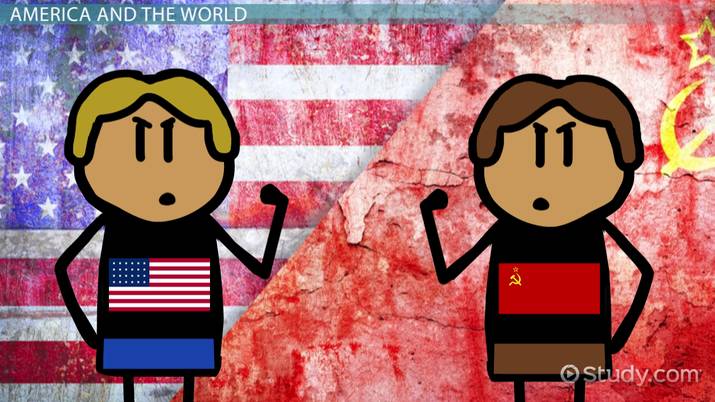 Coming up next: Truman's Fair Deal & Economics After WWII

We're going to look at several segments of American society that required readjustment and recovery after 1945, but let's start with the economy. The American economy crashed in 1929, stagnating through the 1930s and was just starting to recover when America entered the war in 1941. As it turned out, however, the war was just the push that the economy needed for full recovery. The government utilized existing factories for wartime production, giving them hefty bonuses on top of government contracts for planes, tanks, and other military supplies. In 1945, these factories began transitioning back into their regular commercial production. However, many were now flush with funds from their government contracts.

In addition, new technologies made it possible to increase production. The time it took to build a car, for example, was cut in half by new technologies and methods. Wartime technological innovations resulted in new products, like synthetic fibers, including nylons, which flooded into commercial markets. Even homes changed, as William Levitt started building the first mass-produced houses in planned communities, called suburbs. With all of this growth, the American economy transitioned from wartime to peacetime with unprecedented speed and ease. It would be enough to fuel a generation of economic growth, and Americans celebrated. The Depression was nothing more than a horrible memory.

The economy wasn't the only thing that had transition into peacetime. The American people would as well. This meant different things for different groups. In 1944, Congress passed a series of measures meant to both reward veterans for their service in the war and help integrate them into the peacetime economy. Collectively remembered as the G.I. Bill of Rights, these policies included things like low-interest business loans, easy mortgages, and free college tuition for vets. It was a great opportunity for many, bringing the struggling working class of the Depression into the affluent post-war middle class.

However, not all soldiers saw the same rewards. It's important to remember that America's military and society were segregated throughout World War II. Black soldiers returned from the war as heroes, only to find that segregation had no waned one bit. This prompted another element of readjustment after the war: civil rights. The basis of the Civil Rights Movement was in the lack of equality that black soldiers felt after fighting for their country and being denied the right to participate in post-war growth. Their demand for equality resulted in some of the first victories for civil rights. In 1948, President Truman finally desegregated the U.S. Military.

Women would also face their own period of readjustment in the late 1940s. During the war, women took to all of the positions that men had held, including factory work. It was seen as an act of patriotism, but now that the war was over, the patriotic thing to do was to let the men have their jobs back. This was coupled with a dramatic spike in births, known as the baby boom, as lovers enthusiastically reunited after the end of the war, married, and started families. Altogether, there was a lot of pressure placed on women to leave the workplace and serve the nation now as mothers and housewives, not as independent workers.

When we talk about American counterculture, we're often talking about the 1960s. But it's important to notice the seeds of dissent being sown all the way back in the immediate post-war years. American society was booming, but that affluence was not equally distributed. By the 1950s, the beat generation was exploring the concept of cultural rejection through literature, artists like the abstract expressionists were pioneering new styles, and even music was rejecting the strict culture of conformity that emerged. Rock 'n roll was on the rise, championed by the hip thrusting non-conformist, Elvis Presley.

America and the World

For all of the issues America had to face at home, there were other concerns that needed to be addressed on a global scale. WWII devastated the world's empires, leaving the U.S.A. and U.S.S.R. as the only remaining global superpowers. The United States was a democratic nation, committed to the capitalist economy, while the communist U.S.S.R. was led by the dictator Stalin. The United States didn't know how to adjust to this, until the U.S. diplomat George Kennan sent an 8,000-word telegram from Moscow in 1946, know as the Long Telegram. Kennan claimed Soviet communism was aggressive and expansionist, and could not coexist with capitalism and democracy. The U.S. had to prevent communism from spreading, thus establishing the basis for the ideological conflict known as the Cold War.

The United States took on its role as global leader by financing the economic recovery of Western Europe in the Marshall Plan. Thirteen billion dollars was invested into the rebuilding of European infrastructure and development. The goal was to reinvigorate global markets as well as strengthen Western Europe to prevent the spread of communism into nations like Italy, France, and Britain. It was the beginning of a long and costly battle against communism, as America adjusted to its new role in a changing post-war world.

A lot changed for the United States after WWII. First, the newly recovered economy had to prove that it could transition from wartime to peacetime production, which it did. Former soldiers were integrated into this through a series of benefits called the G.I. Bill of Rights, granting them low interest loans, mortgages, and free college tuition. Black soldiers returned from war to find American society still racially segregated, prompting the Civil Rights Movement. Women who had worked in the war were pushed out of the factories and into new roles as housewives and mothers.

In a global sense, the U.S.A. had to figure out what it meant to be one of only two global superpowers. Kennan's Long Telegram in 1946 helped define America's role in combatting the spread of communism. This helped inspire the Marshall Plan, in which the U.S. financed the rebuilding of Western Europe and laid the groundwork for the Cold War. Overall, WWII changed a lot. It would take some time for the United States to understand all of these changes, but the seeds were sown in the immediate post-war years.