From coast to coast, various newspapers connect readers with what they need to know. In this lesson, you'll learn more about dailies, weeklies, and other common types of newspaper publications.
Create an account

Tara loves to visit the big newsstand on the corner across from her office. Not only does it have a quaint coffee shop inside, but it boasts a wide range of newspapers from all across the country. Tara is able to check out news from her hometown of Chicago, read national stories in The New York Times, and catch up on arts and cultural events for the weekend in the small, but informative alt-weeklies.

As you can see, no two newspapers are alike. Publications from coast to coast vary not only in their reach and frequency but in the content that they cover. These characteristics set them apart and provide value to their readers. In this lesson, you'll learn more about the different types of newspapers commonly available to readers.

The types of newspapers in this country are as varied as the types of people who read them. Whether it's a national news story, a suburban Christmas party, or articles of interest to the Spanish-speaking community, there is a newspaper out there that fits. Here are some of the more common newspaper types. 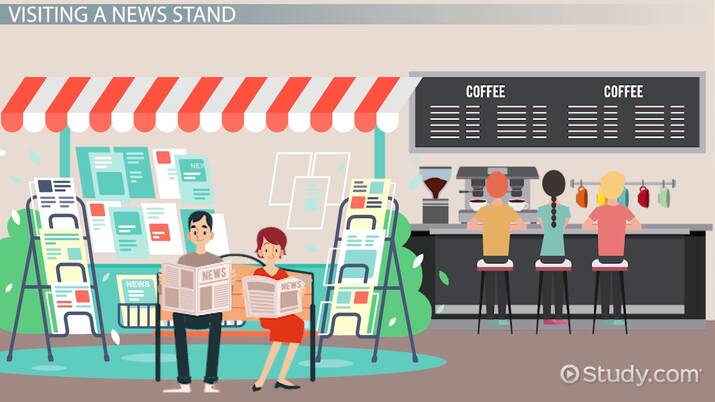 Coming up next: Identifying Catalysts of Change in Newspaper Publishing

National dailies, newspapers that are published each day or at least every weekday, cover a wide range of news topics. Generally, they have a predominant focus on national news, but they do incorporate news from cities across the country. National newspapers also hone in on international news, business news, and a lesser amount of entertainment news. Popular national dailies include USA Today and The Wall Street Journal. Readership of national dailies is varied, drawing readers and subscribers from across the country. However, it has continued to decline in recent years.

Metropolitan dailies are published with the same frequency as national dailies but are built with news articles and ads from local and regional areas. These newspapers will have a page or even a section devoted to national news, but they focus their content more on local government, lifestyles, entertainment, and sports. Readers may refer to a metropolitan daily as their ''local'' or ''hometown'' newspaper. Readership and subscriptions are typically confined to the direct geographic areas. Common metro dailies include The Atlanta Journal-Constitution and The Dallas Morning News.

Many metropolitan dailies will also have zoned editions of their newspaper, which include even more focused local news and sports from the suburbs or communities surrounding large cities.

Suburban and small town dailies are newspapers printed in and covering the news of small towns. Large metropolitan dailies don't have the staff to cover the local Fourth of July parade in a small town, so small town newspapers fill the void. Crawfordsville, Indiana, is a great example of a small town daily. In fact, they have two: The Paper of Montgomery County and Journal Review.

Weeklies and semi-weeklies differ from dailies in one major way: they're printed on a more restricted basis. Weeklies may be published once or even twice a week. For example, some newspapers choose to publish only a weekend edition. Florida Weekly is a weekly publication that serves eight different markets in the Sunshine State.

Newspapers that are part of the ethnic press category cover news in a foreign language to appeal to minorities and non-English speaking readers. Foreign language newspapers in the United States are more common than you might imagine, with Spanish-speaking press being the most prevalent. El Diario La Prensa in New York City is the oldest Spanish daily newspaper in the country. It boasts a circulation of approximately 50,000.

Sometimes called an ''alt-weekly,'' alternative and dissident press is unlike many of the other newspapers we've discussed to this point because it's free. These types of publications are common in cities and on college campuses, and feature arts and culture, events, advertising, and classified ads.

Commuter newspapers, sometimes called ''Take Ones,'' are quick-read newspapers designed to appeal to a younger audience commuting to work. The writing in them is not as in-depth. It generally skims the highlights of news stories for readers. One popular commuter paper is New York City's Village Voice.

Newspapers are as varied as the news they cover and the readers who pick them up from their favorite newsstand. Dailies and weeklies are the most common types, printed either every day or just a few days a week, respectively. Dailies are most common for national and large metropolitan publications, which may also boast zoned editions for suburbs and communities outside bigger cities. Weekly and semi-weekly newspapers may only be printed on the weekend days, for example. The category of ethnic press includes non-English-speaking publications for minorities and immigrants. Alt-weeklies, part of the alternative and dissident press, focus their efforts on arts and culture. Commuter newspapers, sometimes called ''Take Ones,'' provide short news stories designed to be read by a young, commuting audience.

Magazine Types & Genres | What Is a Magazine?

How to Write a Newspaper Article

What is Narrowcasting? - Definition & Examples

The Inverted Pyramid in Journalistic Writing

Impact of the Internet on Global Mass Communication