When a reinforcer appears after a particular behavior, it increases the likelihood that the specific behavior will reoccur. Learn the definition of a reinforcer and explore the different types of reinforcers, including positive, negative, primary, and secondary reinforcers, through some examples. Updated: 09/12/2021
Create an account

Imagine that you are student taking a course on the prevention of mental health disorders. Each week in this class you have a quiz on a chapter in your book. Your teacher encourages you and your classmates to go out and find real-world examples of programs that prevent mental health disorders and write a one-paragraph summary.

You frown at the idea of having more work in the class and decide not to do the summaries since they are not required. Your teacher also adds that for each summary you complete, you get to skip a quiz. Hmm, now you're interested! You turn in a summary every week so that you never have to complete a quiz in the course.

In this example, not having to take a quiz is a reinforcer. A reinforcer is something that increases the likelihood that a specific behavior or response will occur. Reinforcers occur after the response or behavior that you want to increase. A quiz is skipped (reinforcer) only after the summary of a prevention program is completed (behavior). Parents who want to increase the likelihood that their children clean their rooms praise the child (reinforcer) after the room is cleaned (behavior).

You probably use reinforcers everyday without even realizing it. Have you ever told a friend that she looks nice when she dresses up? Perhaps you have praised a roommate after he or she has cleaned your apartment. You pay your bills on time to avoid late fees. These are all examples of things that increase the likelihood that a behavior or response will be repeated. 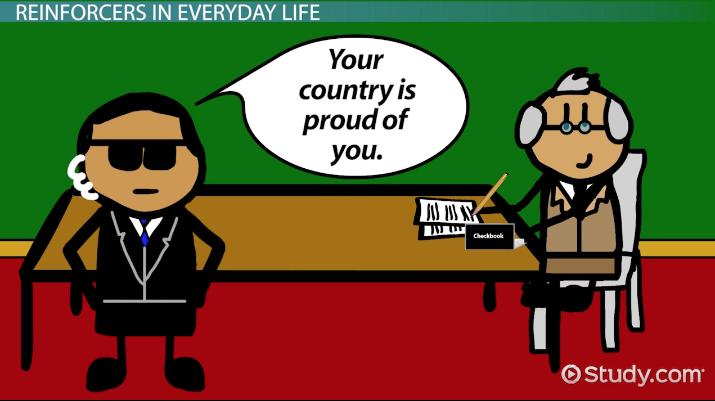 Coming up next: Spontaneous Recovery in Psychology: Definition & Examples

For example, the sound of a bell is a neutral stimulus; however, children at school have learned to associate a bell with food at lunch time. They know that when the lunch bell rings, they will receive food. Food is the primary reinforcer in this situation. The lunch bell is an example of a secondary reinforcer.

Applying the Premack Principle in the Classroom

What is Shaping in Psychology? | Concept & Examples