Relational aggression is aggression that attacks a person mentally and emotionally with the purpose of achieving a goal. Learn more about this insidious form of aggression, which includes gossiping, cyberbullying, and making demeaning comments. Updated: 05/09/2022
Create an account

What Is Relational Aggression?

The 2004 comedy Mean Girls showcased an important social psychology principal: relational aggression. One of the major themes in this movie was bullying. Mean Girls highlighted the manner in which girls typically bully each other: gossiping, hurtful pranks, name-calling and put-downs.

Relational aggression is seen mostly during the less-structured time at school: recess, gym, school bus rides, and lunch. This is when kids have more opportunities to interact and less adult supervision. Relational aggression can deteriorate the victim's self-esteem and confidence and cause a host of mental health problems such as eating disorders, anxiety, depression, and even harmful thoughts. Sometimes, it can cause children to attempt to avoid school. 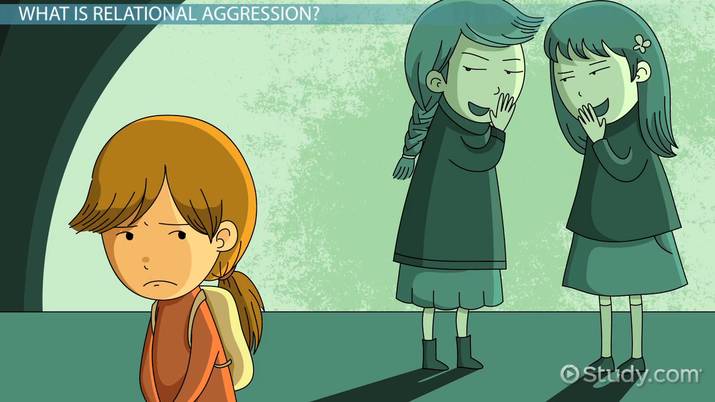 Coming up next: LGBT Bullying Statistics

Let's first look at gossiping. Gossiping is talking about someone behind their back. Sometimes gossiping can contain true and hurtful facts about the victim, but gossip can also be in the form of rumors, untrue or fabricated information about a person.

Elle is jealous of Madison, who is the new girl in school. Madison excels at sports, has a laid-back personality, and has many guy friends. Elle told the varsity football's quarterback that Madison was cool, but that she had problems wetting the bed at night. This was a rumor completely fabricated by Elle to make Madison look bad and to make herself look more attractive. This rumor spread throughout the entire football team. When Madison heard the rumor through a friend, she was completely mortified and embarrassed.

Now let's look at put-downs. Gossiping may be more frequent than put-downs because it's a less direct way to hurt another person's reputation. Put-downs are direct assaults on another person. They can be attacks of another's behavior, relationships, character, appearance, etc.

Elle is the queen bee in one the most popular girl cliques in the eighth grade. She notices that newcomer to the clique Madison rarely wears makeup and dresses more casually than the others. In order to maintain the group's high status, Elle publicly announces that Madison needs to wear more makeup to be pretty. Madison is, of course, humiliated.

Now let's look at exclusion. Exclusion can entail denying another attention, friendship or mere acknowledgment. Elle decides that she no longer wants Madison as a part of her popular clique at school, so she starts ignoring Madison completely. She doesn't say hello or respond to Madison's comments or questions.

Finally, let's take a look at cyberbullying. Cyberbullying, which is putting down, gossiping, or verbally attacking someone in an online space, can be very serious because one bully's mean comment about another can be seen by a wide audience, and this can be very damaging to the victim's reputation.

Elle has many friends on the coolest social media app. She starts shooting candid videos and posting ugly and unflattering pictures of Madison. She includes hurtful captions on these photos and videos as well. When Madison sees the posts and how many people liked them, she is distraught and her self-esteem drops immensely. Madison begins to see herself as someone that others just don't like.

In preschool, programs entail puppet shows, role playing scenarios, established rules about everyone's right to play and participate, and arts and crafts to engage kids in learning about relational aggression. Programs in preschool include The Early Childhood Friendship Project and You Can't Say You Can't Play.

In middle and high school, programs such as Sisters of Nia, Second Step, and Social Aggression Prevention Program begin to focus on decreasing aggression and antisocial behaviors in preteens and teens.

Relational aggression, or aggression intended to bring down the social status or reputation of another, is an increasing problem, especially amongst school-aged children (even more specifically, girls). Relational aggression is a nonphysical form of aggression that can come in the form of gossiping, or talking about someone behind their back; put-downs, or direct assaults on another person; exclusion, or denying another attention, friendship, or mere acknowledgement; and cyberbullying, or putting down, gossiping, or verbally attacking someone in an online space. The victim of relational aggression can experience isolation, loneliness, and sadness. Some victims will eventually experience intense anxiety, school avoidance, depression, mood disorders, eating disorders, or even harmful thoughts.

Relational aggression is often seen during unstructured time at school, such as recess, lunch time, breaks in between classes, or bus rides to and from school. There are numerous interventions in the form of prevention and treatment programs. Many of these focus on teaching kids problem-solving, conflict-resolution, communication, and prosocial skills.

Ch 1. Types of Bullying
Ch 2. Recognizing Bullying & Its...
Ch 3. How to Talk About Bullying
Ch 4. How to Deal with Bullying
Ch 5. Peer & Romantic Relationships for...
Ch 6. Stopping & Preventing Bullying
Ch 7. Anti-Bullying Resources for...

Strategies for Teaching with Technology

How to Use Content-Based Instruction

Technology Integration in the Classroom

Applying Learning Theories in the Classroom

How to Motivate Students in the Classroom

Using Danielson's Framework for Teaching in the Classroom

Partnering with Families of Children with Special Needs