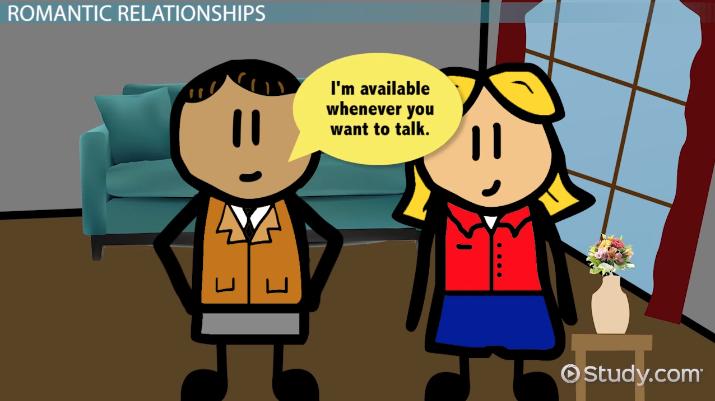 Coming up next: Ending Relationships, Disengagement Strategies & the Detachment Process

Let's start with John Study's non-romantic relationships. John Study has known his friend Jack for a long time. They're very close, and John Study wants to maintain that closeness; he wants the friendship to continue growing. So, he's going to rely on prosocial behavior. At its most basic, a prosocial behavior is an action for the benefit of someone else. In terms of a friendship, it means actions for the benefit of the relationship. Things like openness, honesty, trust, and humor encourage the relationship, as does spending time together, being supportive, and sharing thoughts, ideas, or feelings. These are all prosocial behaviors. Now, relationship maintenance. in this case. means putting emotional and physical effort into the friendship, but it also means knowing where the line is. Some friends are intimidated by too much emotional openness, especially if the setting isn't right. Know your friends, and do what's best for that relationship to maintain it.

Now, John Study wants to see his relationship with his friend grow. But some relationships he wants to maintain exactly as they are. That's what's going on with him and his co-worker, Joan. John Study and Joan work well together, they are able to communicate pleasantly at work, and enjoy each other's company. But, John Study doesn't like mixing work and friends, so he really just wants to keep this as a workplace relationship, and not let it develop any further. But, he still does want to keep it positive at work. This sort of relationship maintenance is going to require a mixture of both prosocial and antisocial behaviors, actions that communicate distance or a lack of relationship. Basically, he draws a line that he doesn't want this relationship to cross. Knowing how to maintain a relationship exactly as it is can be important. John Study isn't looking for new friends right now and honestly doesn't have time to put into developing a new friendship. But, he still wants to maintain a positive workplace relationship with Joan without driving her away. So, this balance is important.

Romantic relationships have different needs at different points, and this determines which communication practices are most important for relationship maintenance. When John and Jane were dating, prosocial behaviors were those that focused solely on each other, which sometimes meant a need to be antisocial with friends. As the dating got serious, prosocial behaviors were focused on direct displays of emotion, from sending cards and flowers to opening up about personal histories, plans, etc. When they got married, the focus on relationship maintenance increased but in a different way. Rather than trying to develop a relationship, as a married couple, the Studys are more interested in keeping that relationship healthy, and sometimes this means encouraging behaviors that communicate absolute trust and empathy. That could include understanding when the other person needs a night with friends or just knowing when to cancel your plans to spend a night at home. Romantic relationship maintenance requires a deep level of commitment and flexibility from both people. But, the payoff is a relationship that is simply worth maintaining.

Communication as Transactional Process within Organizations

How Perception Influences the Communication Process

The Importance of Context in Communication

What is Stress Management? - Definition & Benefits