Balancing costs in relation to selling or processing materials further will depend on how the other aspects of production are performing. Learn more about whether to sell or process materials further, considering relevant costs, making a decision and relevant examples. Updated: 12/14/2021
Create an account

To Sell or Process Further?

Have you ever created a painting? Just when you think you've finished it, you wonder if there's something else you could add to make it better. Many companies often have the same problem. They could always do something else to their products. However, while your painting is ultimately your creativity's responsibility, a company's primary goal is to make sure that it is maximizing profitability. As a result, the decision to sell a good or process it further in order to gain a higher price is one that many companies face. In order to make the right decision, a company has to know what to look for. In this lesson, we'll look at the relevant costs to selling or processing a product further, first conceptually and then through use of an example. 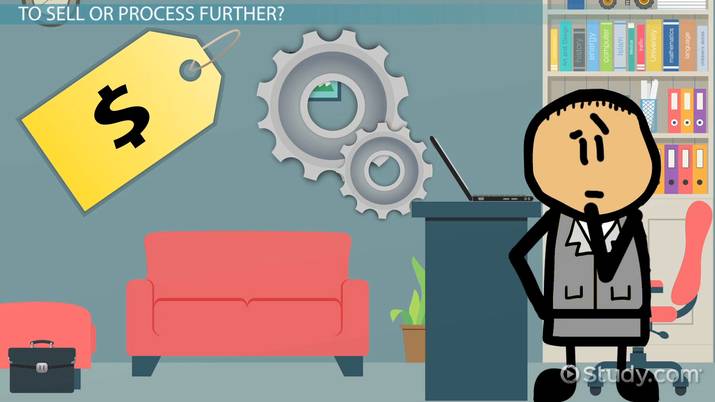 Coming up next: Relevant Costs to Repair, Retain or Replace Equipment

When looking at the decision to sell or further process a product, one must always be mindful of the relevant costs, or those costs affected by a given course of action. Often, they include manufacturing or sales costs, and they exclude costs like accounting or administration.

However, there two different types of costs to look at. The first are variable costs, which are those costs that increase with each additional unit produced, such as additional labor or materials costs. The second are fixed costs, which may go up as a result of the decision as a whole. If you have to train your staff or build a new factory, those are both fixed costs.

In either event, it is only worthwhile to proceed if the total expected units sold brings in more money than the sum of the fixed costs and the variable costs. Meanwhile, each unit sold should sell for a price that exceeds the variable cost.

So, what does that all boil down to? Simply look at the variable costs of either option and then subtract them from the expected selling prices. If the difference between the refined selling price and refined variable cost is low, then it's not worth pursuing. Otherwise, factor in fixed costs by asking yourself how many units you expect to sell and then multiply that by the profit per unit. If your profits are higher than pre-upgrade profits, then you should consider further refining the product.

Since your expected units sold and costs can fluctuate depending on market conditions, you should also reevaluate your decision if conditions change. For example, your production costs may fall or rise, or you may find yourself having to sell each unit for a lower price to stay competitive.

For better or worse, cars sold in the United States come with a healthy amount of haggling. You know the drill: You show up to the dealership. You point out a smudge of paint, and the salesperson talks to a manager that may or may not exist. You end up both shrugging and accepting a deal that you're both pretty happy to get. So many other expensive things are sold directly from the company that makes them, so why don't you just go to a single car brand's store instead of having all these little dealerships?

The reason is simple: The car companies chose to maximize their profits by only selling to these dealerships in order to keep their costs low. In doing so, they did not process the materials further by agreeing to undergo a bunch of custom orders straight from the population. Instead, they let the dealers handle those. By not being bothered by thousands of custom orders, the car manufacturers could focus on just making cars, while the dealers could focus on just selling them. As a result, both were able to limit their costs.

No matter what, the unit's selling price should always exceed the variable cost per unit, and if the decision to further process a product is made, it should be made with the assurance that the expected profit will be greater than would have existed otherwise. Lastly, the decision to sell or process further needs to be reevaluated as market conditions change to ensure continued profitability of the company.