Lesson Transcript
Instructor: Lucy Barnhouse
Shakespeare's nuanced treatment of religion in Hamlet has been the subject of much scholarly debate. This lesson discusses the apparent convictions of the play's characters and their implications for the drama and how it was perceived by Shakespeare's first audiences.
Create an account

Both William Shakespeare's own religious views and his treatment of religion in his plays have been the subject of much scholarly investigation. In sixteenth-century England, the English Reformation and its aftermath caused great upheaval, as successive monarchs embraced opposing religious practices. Queen Elizabeth, during whose reign Hamlet was written, forged compromises. Members of the Church of England were privileged, but many Roman Catholics practiced in secret, and very many people, regardless of confessional identity, were confused about correct belief. And getting religion right wasn't just a matter of politics or preference; it was a matter affecting the immortal soul. As we shall see, Elizabethan ideas and anxieties about religion are reflected in Hamlet. 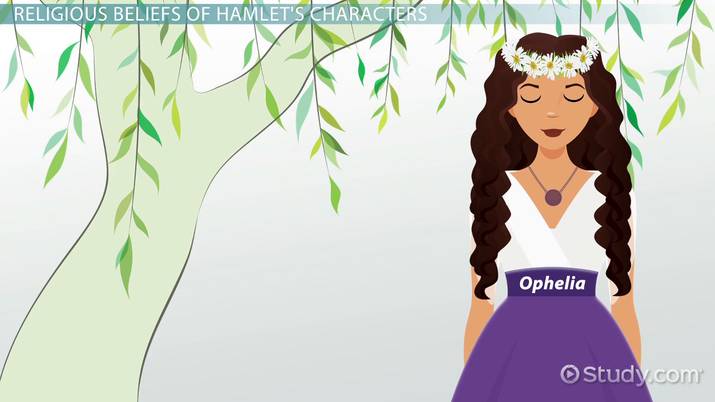 Coming up next: Depression in Hamlet

Religion and Hamlet: Theories and Themes

Typical of Shakespeare's works, Hamlet does not articulate a single set of beliefs but rather several different positions, dramatizing religious debates. Shakespeare could even be seen as poking a bit of fun at academic debates on theology when Hamlet famously says to his friend from university, 'There are more things in heaven and earth, Horatio, / than are dreamt of in your philosophy' (1.5.187-88, Folger edition).

The question of free will is central to the drama of the play. Hamlet's intense self-examination becomes more understandable in this light. Hamlet clearly has a strong sense of moral responsibility to himself, as well as to others. Also central to the play are the reality of death and the question of what - if anything - comes after it. The ghost of Hamlet's father speaks of being in purgatory, forced to atone after death for his sins. His suffering is in part attributable to the fact that he was murdered without a chance to confess, giving Hamlet an added motive for revenge. Hamlet's reactions to the ghost reveal a complicated worldview in which Christianity and folk belief are not entirely separate.

Hamlet clearly spends a lot of time thinking about religious duty. When he first meditates on the temptation to suicide, he expresses the wish 'that the Everlasting had not fix'd / His canon 'gainst self-slaughter,' or in other words, that it was not a sin in the eyes of God to kill oneself (1.2.135-36). Hamlet also experiences religious doubt, however. In his famous soliloquy beginning 'To be, or not to be,' he asks himself whether it is 'nobler in the mind' to suffer, or to end suffering through suicide (3.1.64-65). This philosophical dilemma ignores the theological dimensions of the question entirely. Toward the end of the play, Hamlet's doubts seem to grow; his exchange with the gravedigger in Act 5, Scene 1 shows that he views death as absolute.

In the character of Ophelia, Shakespeare presents a challenging paradox. With the possible exception of Horatio, she's the most obviously good person in the play. When Hamlet says, 'Nymph, in thy orisons / Be all my sins remembered' (3.1.97-98), he doesn't mean that he wants Ophelia to keep track of his sins, but rather to pray for their pardoning. His order that she should go to a nunnery is cruel in context, but also shows his admiration for her spiritual goodness.

Shakespeare portrays Ophelia as an innocent despite the fact that she commits suicide, a mortal sin. In Act 5, Scene 1, the gravediggers mock the coroner's decision that Ophelia drowned herself in self-defense. Shakespeare, however, suggests that this is exactly what she did do, taking the only possible way out of a court that is rotten to its core with corruption and violence. Giving her Christian burial on stage was a dramatic way of suggesting her innocence.

Realistically, Shakespeare doesn't have everyone in Hamlet thinking about their souls all the time. Queen Gertrude doesn't seem to think about the morality of her actions much at all. Neither does Laertes, Ophelia's brother. Although he gives his sister detailed behavioral advice in Act 1, Scene 3, he casually buys poisons in Paris. Moreover, he doesn't hesitate at all in plotting to murder Hamlet as an act of vengeance, a ruthlessness contrasting sharply with Hamlet's own torments of conscience.

Claudius has committed one of the worst sins: he's murdered his brother, as Cain killed Abel according to the book of Genesis. He's fully aware of his guilt. As shown in Act 3, Scene 3, however, he doesn't truly repent: he's very happy to enjoy the power he's gained as a result of murder! He goes on to plot his nephew's murder, and mere seconds before his death, is still pleading not for pardon, but for defense. He's absolutely loathsome.

Horatio is a character who is deeply good, but not particularly religious. As we learn in Act 1, Scene 1, he doesn't believe in the existence of the ghost until he sees it himself. When he's discussing ghosts with the soldiers on watch, they refer to Christian traditions, but he refers to Roman history. He alludes to his own pre-Christian moral system in the final scene, when he tries to kill himself so that he may die with his beloved Hamlet, exclaiming 'I am more antique Roman than a Dane!' (5.2.374). Poignantly, as Hamlet dies, Horatio says to him 'flights of angels sing thee to thy rest!'

In Hamlet, Shakespeare dramatizes many of the debates and religious doubts that were common in the wake of the English Reformation. The question of what comes after death is central to the play, with its ghost and multiple murders, and Hamlet's long deliberations about suicide. That suicide was seen as a sin makes Hamlet hesitate, but it doesn't hold him back from considering it. When Ophelia, whose spiritual goodness is widely recognized, commits suicide, Shakespeare suggests that she should not be held guilty. As shown particularly in the figures of Claudius and Horatio, the morality of the characters in Hamlet is not necessarily dependent on their religious convictions.

Significance of the Play-Within-A-Play in Hamlet

Is Hamlet a Tragedy? - Plot & Genre