The world has undergone many religious and philosophical shifts highlighted in several major world religions since the end of World War II in 1945. Explore changes in Catholicism made through the liberal-minded Vatican II decree, and in Islam, whose leaders embraced increasingly conservative interpretations of the Qu'ran, leading to the rise of radical Muslim sects. Updated: 09/29/2021
Create an account

As the only animals on this planet capable of advanced cognitive logic and reasoning, it only makes sense that we spend much of our lives contemplating and discussing ideas. Whether these are the abstract ideas of strains of Enlightenment philosophy, or the concrete rules and directives expounded by the leadership of a religion, these fundamental ideas are what many of us spend our entire lives mulling over. This lesson will detail how some of these ideas and institutions changed in the second half of the 20th century. 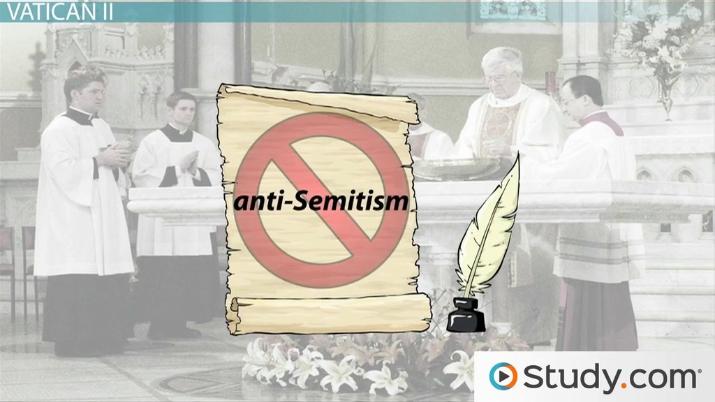 Coming up next: The Advance of Science & Technology Since 1945: Developments & Impact

Philosophy, in comparison to religion, has certainly undergone far more radical changes in its history than any of the dogmas of major religion. Indeed, from the nihilism of Nietzsche to the realism of Plato, philosophy encompasses a huge breadth of writing and theory. However, in the second half of the 20th century, many philosophers, both popular and academic, embraced the ideas of classical pragmatism.

Though its adherents provided varied justifications and theories, pragmatism largely embraced the idea that philosophical tools, such as reason, logic, and ethics, should be used not to prove or disprove abstract concepts, such as the soul or self, but to be put to use to better society and the well-being of people. As a result, many prominent philosophers, like Bertrand Russell, began calling for philosophy to be taught in schools and the general ideas of classical philosophy to be disseminated to a wider audience. Behind such motivations were altruistic goals to produce a more organized and intelligent society that would work together to improve their community.

This coincided with a massive increase in access and enrollment in higher education immediately after World War II (WWII), further bolstering the public's exposure to the new pragmatism. Indeed, modern philosophy and pragmatism played its part in various movements of the second half of the 20th century, from the civil rights movement of the 1960s to various community-involvement organizations, like Kiwanis International or The Rotary Club.

Increased engagement with the public was not only the goal of professional and academic philosophers after WWII. The Catholic Church, an organization nearly two millennia old, also felt it necessary to address its problems of lower attendance and the growing lack of faith within Catholic circles. As a result, Pope John XXIII called the Second Vatican Council, which convened in October 1962. Catholic leaders from around the world flocked to Rome to discuss the very nature of the Church. Additionally, the Pope invited leaders from several Christian faiths who had broken with the Catholic Church either recently or in the distant past, such as several Protestant sects or Eastern Orthodox churches, who all attended the Council as observers.

After several years of sessions and lively debate, the Catholic Church issued a series of decrees and orders which opened up the workings of the Church to its members and fostered greater participation. Prior to Vatican II (as the Council's decrees were collectively nicknamed) most Catholic churches still required the mass to be said entirely by the priest in Latin, often spoken barely above a whisper with his back turned to the church.

After Vatican II, the mass was allowed to be translated and said in regional language and vernacular. Additionally, Vatican II dictated for greater lay participation in the rituals and sacraments of the mass. For example, whereas prior to Vatican II only the priest was allowed to offer the communion sacrament to his parishioners, now lay church members could offer the sacrament to the congregation once it was consecrated by the priest.

Other important developments came out of Vatican II which made the Catholic Church appear more open and involved in the worldwide community than it had previously. For example, Pope John signed a decree publicly condemning anti-Semitism - an important step, as prior to Vatican II many ignorant Catholics and Christians still held the Jewish people responsible for the death of Christianity's messiah, Jesus Christ.

Furthermore, Vatican II laid out formal plans for dealing with the media and the details of the duties of certain branches and offices of the Church hierarchy - information which had hitherto been unavailable to the general public or even Catholic Church members. The increased openness Vatican II fostered is often seen as a major turning point in the history of the Catholic Church and certainly as the most important event of Catholicism in the 20th century.

As Catholicism scrambled after WWII to make itself more open and retain what followers it had, the fastest growing religion in the world during this period was Islam. Islam is an Abrahamic religion whose followers view themselves as the heirs to the Abrahamic line. While it recognizes the teachings of other Abrahamic religions, Judaism and Christianity, the bulk of the tenets of Islamic faith come from the teachings of the 6th and 7th-century prophet, Muhammad.

In the second half of the 20th century, Islam benefited from Western decolonization and flourished in Africa and Asia. As Great Britain and France withdrew their occupation forces from the Middle East, Arab regions and their largely Muslim population gained political autonomy. Additionally, they asserted themselves culturally through celebrating and spreading their own traditions, of which Islam was a fundamental component. Moreover, as Muslims emigrated to Western Europe and North America, they took with them their religion, establishing mosques and Islamic communities, gathering converts in the process.

The spread of Islam was not as clean as one would hope. The Arab and Islamic world has been a hotspot for conflict for the entirety of the post-WWII world. Indeed, while a large part of this has to do with the imposition of Jewish Israel on the Arab and largely Muslim population of Palestine, issues within Islam caused major problems. Sectarian violence has flared at times in the centuries-old rivalry between the religion's two principal groups, Shiite and Sunni Islam, in different regions of Africa, Asia and the Middle East.

Additionally, certain isolated sects within Islam have interpreted the Islamic holy book, the Qu'ran, in a decidedly militaristic mindset, believing that all of the Islamic world should belong to a pan-Islamic caliphate governed by Islamic law. These extremist groups often abhor Western influence and values and believe they must do everything within their power to stop the encroachment of Western society upon their traditional territory.

Unfortunately, although this militaristic faction is by far the smallest, it is also the loudest, as extremist groups, such as al-Qaeda, perpetrated several terrorist attacks on Western targets in the second half of the 20th century, including the bombing of the U.S. embassy in Kenya, the Lockerbie bombing over the skies of Scotland, and the attack on the U.S.S. Cole in Yemen. Ironically, the violence of these fringe groups has actually made life harder for the vast majority of peaceful Muslims who are at times subject to both individual and institutional xenophobia in Western countries, like the United States and Great Britain.

As the struggle for the meaning of Islam portrays, ideas, be they philosophical or religious, shaped and drove many of the world's events in the second half of the 20th century and continue to do so today. Indeed, the pragmatism and community engagement of many post-war philosophers hoped to sculpt an intelligent, thoughtful, and engaged community.

Meanwhile, the Catholic Church hoped to better retain its own community through fostering increased openness and community involvement in the church. At the same time, Islam added members in leaps and bounds, growing incredibly fast after the decolonization of the Arab world. However, the post-WWII Islamic world proves that even religious organizations can suffer from significant growing pains.

After completion of this lesson, you should be able to:

Our Country: Its Possible Future and Its Present Crisis by Josiah Strong