Africa is home to many different cultures, histories, ethnicities, and, consequently, many religions as well. Learn more about the similarities and differences of the religious systems of Africa, including indigenous religions, Abrahamic, Islamic, and Christian beliefs of people in the region. Updated: 10/29/2021
Create an account

Are you a religious person? If you are, chances are you go to a church, mosque, or synagogue on a regular basis to be in the house of your God. You also might pray at night, at meals, or at other times. Still, chances are religion still does not permeate your life quite as much as it does for many Africans. Not only do many Africans believe in Abrahamic religions, like Islam or Christianity, but they also often blend in parts of the belief systems of indigenous African religions as well. In this lesson, we will explore some basic characteristics of the numerous and diverse indigenous religions of Africa, as well as how these hybrid religions shape life in Africa. 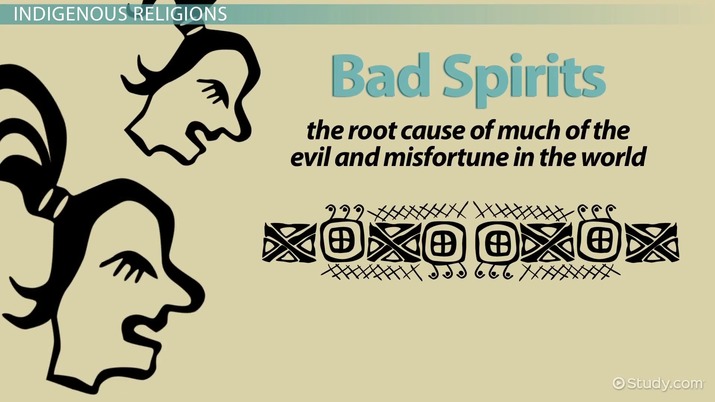 Try it now
Back
Coming up next: The Spread of Pastoralism and Agriculture in Africa

First off, we should note that it is impossible to fully grasp the aspects of all of the indigenous religions in Africa in the short time we have here. After all, we are talking about thousands - if not tens of thousands - of local beliefs, rituals, and customs! With this in mind, there are a few important characteristics of most African religions that we can discuss.

First of all, it's important to understand that religion plays a central role in the everyday life of Africans. For example, though other religions have certain stipulations that affect the everyday lives of their followers (for example: Jews are not supposed to eat shellfish; Hindus are not supposed to eat beef), they generally don't have the same level of influence on the everyday events as Africans who adhere to indigenous African religions. Depending on the religion, there can be stipulations on clothing, diet, how to complete daily tasks, cure illnesses - everything. Moreover, whereas in Abrahamic religions there tends to be one holy day of the week, in indigenous African religions, there can be several, and it can differ from week to week.

The centrality of religion in African life makes it an important factor in the customs and worldview of most Africans. Religion in Africa provides a system through which Africans can interpret the problems and deeper questions of life. Furthermore, indigenous African religions generally believe in active supernatural forces. Though the god of many monotheistic religions in Africa does not have an active hand in everyday events, those religions that believe in many gods or in active spirits believe they take an active role in the everyday life of humans. Indeed, not only can these spirits intervene in human actions, but they can also act as middlemen between the greater gods and humans if spoken to correctly or appeased properly. Many theologians compare these supernatural spirits to similar beliefs in Catholicism, such as devotionals and prayers to angels and saints.

African religions are often full of these spirits, both good and bad. Good spirits can often provide protection to those who pray to them. This can be protection from illness, drought, war - just about anything. Though good spirits generally never act maliciously, bad events are at times interpreted as the removal of protections by a certain spirit who was angered by the actions of the community or an individual. Included in the 'good spirit' category of many African religions are the spirits of deceased family members and ancestors.

Conversely, there are also bad spirits that are the root cause of much of the evil and misfortune in the world. These spirits are actively working against the wishes and hopes of humanity. These bad spirits often have to be thwarted through pleasing the good, protectionist spirits. This, of course, is only a rough outline, and the intricacies of each god or group of spirits is particular to each culture and religion.

The indigenous religions of Africa coexist alongside more recently introduced global religions, namely Islam and Christianity. Most Africans who identify themselves as Muslims live in the North, while most Africans who identify as Christians live in Central and Southern Africa, though it should be noted that communities of both can be found everywhere. Religion in Africa is often not an 'either/or' scenario. Many religious Africans incorporate tenets of Christianity or Islam along with practices and beliefs from their indigenous religions.

Soon after Islam's founding in the Middle East in the 7th century C.E., the religion spread to Africa across the Sinai Peninsula and the Red Sea. By the end of the 12th century, most of North Africa had communities that identified as Islam. By the end of the 15th century, Islam had spread south across the Sahara into the Sahel, in regions which are today countries like Nigeria, Somalia, and those along the Gold Coast.

The tenets of Christianity and Islam are often superimposed by its adherents onto the indigenous religions practiced by their ancestors. For example, the saints and angels of Christian theology are often conflated with the good spirits present in many indigenous African religions, and bad spirits with demons or the Christian devil. One such example of this is the Ethiopian Orthodox Church, which adheres to basic Catholic Church doctrine and adopts a similar hierarchical structure, while at the same time blending in traditional Ethiopian beliefs.

Religion can be a tricky thing. It can mean one thing for one person and a completely different thing for another person, and they may even go to the same religious service! Perhaps nowhere is this complexity better displayed than on the continent of Africa. Thousands of indigenous religions exist in Africa, which dictate many facets of everyday life for Africans. Some may have one god; some may have many. In addition, most include spirits, both good and bad, which play an active role in the lives of everyday Africans. In addition to these traditional customs and beliefs, most religious Africans also consider themselves either Christian or Muslim. They do not, however, consider themselves only that. Often they blend together either Christianity or Islam with their traditional beliefs, creating a hybrid religion that is distinctly African.

As you progress through this lesson, make it your goal to:

The Rise of Islam in Africa | Spread, Characteristics & Influence

Agnostic Theist vs. Atheist | What Does Atheist Mean?

African Ethnic Groups & Cultures | How Many People Live in Africa?

The Rise of Islam in Africa | Spread, Characteristics & Influence

Agnostic Theist vs. Atheist | What Does Atheist Mean?

African Ethnic Groups & Cultures | How Many People Live in Africa?