The Renaissance was a period of time in the 14th century when art became centered on the individual and Earthly experiences rather than the mystical or ethereal. Discover how humanism shaped the art of the Renaissance and identify Greek and Roman influences on artists, paintings, sculptures, and architecture. Updated: 08/15/2021
Create an account

Hi, it's me, Jessica, your history instructor for the day. Today we'll be discussing Renaissance art, from painting to sculptures to architecture. Our goal for this lesson will be to grasp how the intellectual philosophy of humanism, or the belief in the independence and value of man, shaped the famous artwork of the Renaissance. In order to do this, I've made a scrapbook for us to look at together, filled with some of my favorite Renaissance pieces.

However, before we get to the scrapbook, let's quickly review the definition of the Renaissance - it was a period beginning in the late 14th century. During this period, people began taking an interest in the learning of earlier times, especially the cultures of ancient Greece and Rome. As the French word implies, it was a rebirth of the appreciation and study of classical times. 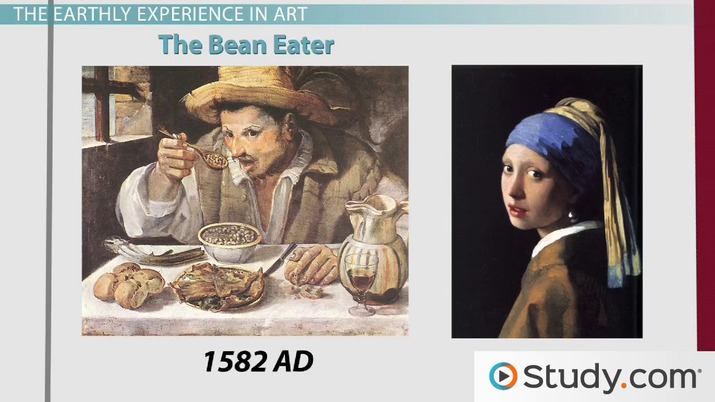 Coming up next: The House of Medici: Rise and Fall of a Banking Family

The Earthly Experience in Art

Now on to my scrapbook. On our first page, we have the famous Madonna and Child in Glory, painted by Cione somewhere around the year 1360 AD. Notice how Mary is very large in the picture and has an ornate halo of gold. It's like the artist wanted to emphasize that she and the child are supernatural beings, not of this world, and above common man.

Now take a look at the painting on the left. This one is Bugiardini's Madonna and Child with St. John, painted about 150 years later in the year 1510 AD. In this painting, Mary and the child look very human. Mary has no halo, and the halos of Jesus and John are very small, almost translucent. Even more interesting - notice how the background of the two paintings differ. In the earlier painting, the background seemed ethereal, or almost mystical, while the latter painting has a natural, Earthly landscape. This is a great example of one of the main effects humanism had on Renaissance art - works became centered around the human individual and the Earthly experience rather than the heavenly realms.

Let's continue. On the next page, we have Raphael's famous Deliverance of St. Peter next to Bellis' Liberation of St. Peter. Raphael's was painted in 1514, while Bellis painted his somewhere around 1665. Notice again how the earlier painting of Raphael's emphasizes the angel with a heavenly glow as the backdrop, while Peter was also given a solid halo. Now contrast this with the very realistic backdrop of Bellis' work, in which the angel looks very human, and Peter sports no halo at all.

This concept can also be seen in the Creation of Adam by Michelangelo. This famous piece of artwork found its place on the ceiling of the Sistine Chapel somewhere around 1512. Notice, again, how Michelangelo placed Adam in a natural landscape, with natural man as the emphasis of his painting. In fact, God himself is depicted as human, in human form, he's no larger than Adam, and he's surrounded by very human-looking angels.

This is also mirrored in Da Vinci's The Last Supper, painted in the late 1490s. This painting shows Jesus as a man with no heavenly features at all.

The idea that humans were worth painting in their natural form was also heralded by Leonardo da Vinci in his well-known, uber-famous Mona Lisa. When Da Vinci created this famous lady, somewhere between the years 1503-1519, he opted to focus solely on humanity without any religious themes. This trend is also seen in Carracci's The Bean Eater, painted somewhere around 1582, and Vermeer's Girl with a Pearl Earring, painted somewhere in the year 1665.

This move toward humans standing alone as a valid theme in art is also seen in the sculptures of the day. Again, take a look at Michelangelo's famous David of 1504. In this one, you can definitely see the humanistic influence in Michelangelo's work - how he strove to capture the human essence of David through sculpture.

This is also seen in his earlier work, The Pieta, sculpted in 1499, and his latter work, Moses, crafted around 1515. Again, these two works show Biblical characters in their humanity with no halos or supernatural trappings.

A second effect of humanism on Renaissance art was the imitation, or the rebirth, as the word 'Renaissance' implies, of the ancient Greek and Roman cultures. During the medieval period of history, most art produced was centered on the Church. However, as humanism took hold, the Greek and Roman ideals of human beauty were also reborn. Take a look at Botticelli's 1486 rendering of The Birth of Venus and Raphael's 1509 fresco The School of Athens. These two works focus on Greek history and mythology with no 'head nod' to the church.

Bandinelli also gave kudos to the Roman culture with his sculpting of Hercules and Cacus during the years 1525-1534.

This move toward ancient Greek and Roman cultures also heralded the return of logic and accuracy to art, a concept earlier works had generally abandoned. Compare the 12th century work of Mary Magdalene Announcing the Resurrection to the Apostles to the realistic accuracy of Pierro della Francesca's 15th century The Flagellation of Christ. Notice how the latter work of Francesca uses perspective - the art of drawing solid objects on a two-dimensional surface, so as to give the right impression of their height, width, and depth.

Da Vinci also gave us an excellent example of this realistic accuracy in his 1490 work The Vitruvian Man.

The desire to revive and emulate the styles of ancient Greece and Rome is also seen in Renaissance architecture. In fact, a journey to Rome was considered a prerequisite for any architect's training. Columns, arches, and domes are only a few of the elements Renaissance builders borrowed from the antiquities.

One of the best, and in my opinion, most beautiful examples of this is the Dome of St. Peter's Basilica. Here's another picture taken in St. Peter's Square. Notice all of the columns giving homage to ancient Rome. Or take a look at this one, the Cathedral of Florence, whose dome was engineered by one of the most famous Renaissance architects, Filippo Brunelleschi. He was also fond of the Roman arch, as we can see in his work at the Basilica of St. Lawrence. In all of these feats of architecture, we can see the classical Greek and Roman influences of symmetry, proportion, and geometric design.

Well, we've come to the end of my book, so I guess that about does it. Thanks for allowing me to share with you some of my favorite pieces. As we've learned from them, Renaissance art was greatly influenced by humanism in that

I guess we've come to our end, so thanks for joining me! I hope you enjoyed it.

Once you've gone through this lesson, you should have no problem:

The Birth of Parliament: Monarchs vs. the Aristocracy

The Italian Renaissance and Italy's Transformation