Replacement rate is a number that relates to population replacement. How is this number calculated, and what does it mean? Read on for a better understanding of replacement rate and test your knowledge on fertility rates.
Create an account 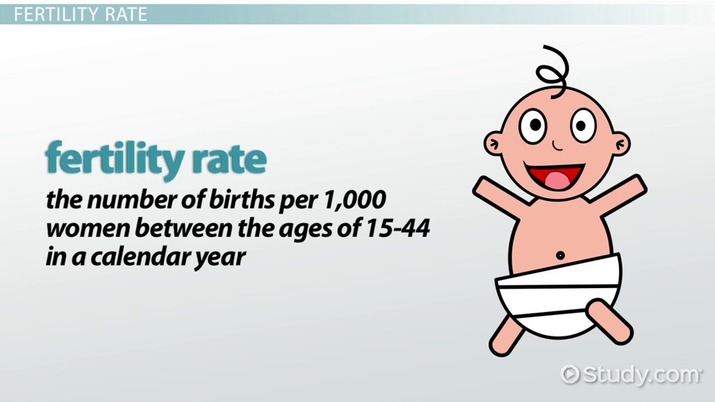 Coming up next: Malnutrition: Causes of Over-nutrition and Under-nutrition & Most Affected Regions

Now that we got that out of the way, let's dive into replacement level. Replacement level is the amount of fertility needed to keep the population the same from generation to generation. It refers to the total fertility rate that will result in a stable population without it increasing or decreasing. It is expressed as the total number of live births a woman would need to have over her child bearing years, which is typically ages 15-44.

In other words, scientists look at the population that is decreasing due to death or mobility and estimate the replacement rate, or the number of births necessary to replace the loss. They also look at the number of childbearing women and fertility rates in each group to determine replacement levels. This is why the number varies greatly from region to region; many of these factors change quite a bit over a period of time. While the replacement rate doesn't change drastically across a small region, it can show big changes across the globe.

The net reproduction rate is closely related to the replacement level but asks a slightly different question. It is defined as the average number of daughters a woman would have to bear to keep the population stable. This takes out the variation of gender births.

The widely accepted replacement level rate is 2.1 births per female for industrialized countries. If there were no deaths before age 45, then the replacement rate would be 2.0. It does substantially vary, however; for example, levels in Sierra Leone are as high as 3.43.

Scientists who calculate replacement levels aren't just bored; they have great reasons for researching and figuring out the math. In order for the government to make informed policy decisions about population growth and trends, the calculations of replacement level and total level fertility need to be made. They can answer important questions like: Will there be enough schools for the large numbers of children that we're expecting? Are there expected to be a larger number of old people with associated needs? How are enough jobs going to be created for the expected number of people entering the workforce?

Population scientists have a lot of things to figure out. They calculate fertility rate and total fertility rate to determine the number of children a population can expect. Using this information, they also look at the replacement level and use this information to calculate the replacement rate, or the number of births necessary to replace a loss in population. This population decrease is the result of mortality or mobility, among other reasons.

Factors that affect replacement levels are mortality, immigration, emigration, and gender birth rate. Finally, population scientists study replacement rate for great reasons including, most importantly, using the data to help predict population trends. This information provides information needed to make decisions about schools, roads, or other social structures. Replacement rate may seem like a complicated subject, but it's really a simple idea with long-reaching implications.

What is the term for a sudden decrease in total fertility rates to replacement levels that could still result in a population increase for several generations?

The Gravity Model: Definition & Use