You might not think salt and a banana have much in common, but they do! The periodic table organizes elements into groups based on similar properties. This video will explore the representative elements, focusing on each group or family.
Create an account

It's 3 a.m., and you can't sleep. Your mind is racing from all of the element talk from the previous day:

So many elements! If only there was a way to organize them so you can get some sleep. But wait, there is! Take a look at this, it's the periodic table of elements, and it's the solution to all of your problems. Okay, maybe not, but it is quite impressive. The periodic table is a chart that groups elements together based on similar characteristics and atomic structures.

You'll notice that the symbols are used to save room. For example, instead of aluminum, the periodic table says Al. We will be focusing on their representative elements, which are sometimes referred to as the main group elements. We'll take a tour of the periodic table and these elements shortly, but we need to go over some vocabulary first.

When you look at the table, it's helpful to be familiar with some vocabulary so you can navigate. The vertical columns represent families, or groups of elements, whereas the horizontal rows are called periods or series. You'll notice there are numbers above each group of elements. Since our focus is the representative elements, it's worth noting that these include groups 1A through 8A. You'll notice all of the groups belonging to the representative elements have an A after the group number. Sometimes periodic tables use roman numerals for group numbers, but we won't here. 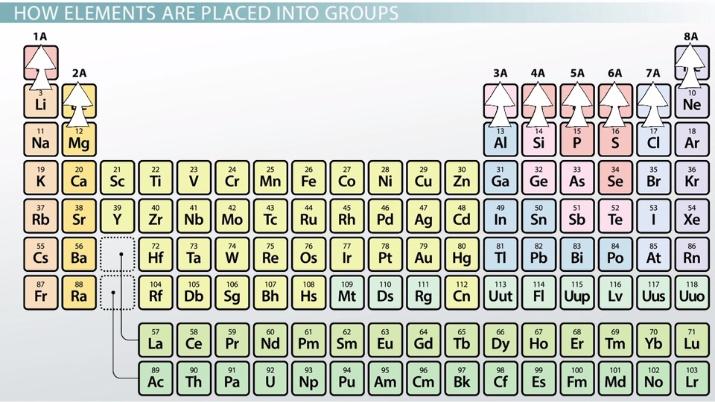 Coming up next: Alkali Metals (Group 1A Elements): Definition & Properties

How Elements are Placed into Groups

So, what does the helium for your brother's balloon have in common with a neon sign? Both helium and neon are in group 8A (also known as noble gases, but we'll get to that shortly). Elements are grouped together because they share similar properties, in part due to their electrons, specifically valence electrons. Elements have protons and neutrons in their nucleus, or center, and electrons in a cloud surrounding the nucleus.

Valence electrons are the outermost electrons, or the electrons farthest away from the nucleus. These electrons help determine an element's properties. Remember I said the periodic table would help you organize all of the elements keeping you awake? Well, check this out.

We'll start our tour on the far left with group 1A, or the alkali metals. Although hydrogen appears to be in this group, it actually isn't. Hydrogen is a little confusing and is a bit of a misfit! You might have guessed it already, but the alkali metals have one valence electron, which makes them quite reactive (think: explosion)! In fact, they don't even exist in nature in their pure, elemental form because they quickly react, or combine, with another element to create something new. So you don't need to worry about the potassium in your banana; it won't make your stomach explode!

Next, you have the alkaline earth metals, or group 2A. Although these guys are also too reactive to occur in their pure state in nature, they're a little less reactive than the first group. Both group 1 and 2 have alkali in their name because they create a base (something with a pH greater than seven) when they react with water.

Let's travel to the right of the periodic table and take a look at 3A, 4A, and 5A, none of which get fancy names. Some of the elements in this group are very abundant on Earth. Aluminum, for example, is the most abundant metal in the Earth's crust, nitrogen makes up 78% of the air you breathe, and carbon is found in everything that was or is alive. Some of these elements are metals, whereas others are non-metals. There are even a few that are metalloids, or elements that have properties of metals and non-metals. Even though each group varies greatly, you can take comfort in knowing that group 3A has three valence electrons, group 4A has four valence electrons, and group 5A has five valence electrons.

Let's check out group 6A, or the chalcogens. This group of elements varies greatly. For example, it contains oxygen, a colorless gas vital to your survival, as well as polonium a radioactive metal that can kill you. Although there is a lot of variation amongst elements in this group, they all have six valence electrons.

Onto group 7A, which are called halogens. All of these have seven valence electrons. This group is very reactive, but when they combine with another element, they are probably very familiar to you. For example, chlorine can be found in bleach, certain medicines, and even in table salt.

Our tour will conclude with group 8A, or the noble gases. With the exception of helium (which has two), this group has eight valence electrons. This makes noble gases extremely stable, meaning they aren't likely to react with other elements. This group has all the fun - being the gas in a helium balloon or the bright, shiny lights in a neon sign.

Now that you know there is order to all of the elements, you can finally get some sleep! The periodic table organizes elements based on similar characteristics. Each group or family has the same number of valence electrons, which gives them similar properties, such as reactivity (even if they do look completely different). The representative elements include eight groups, including the most abundant elements on the planet, not to mention the calcium for your bones, the potassium for your leg cramps, the iodine for Fluffy. . . well, you get the idea.

After you have finished this lesson you should be able to: