Many people are injured at home more so than anywhere else. This isn't necessarily because people's homes are more dangerous than work or the outer world in general, but because we spend so much time at home and do so many different things in and around our homes. We cook, build things, use ladders, mow the lawn, shovel the driveway, and plenty of other stuff that can end in an injury or, worse, a tragedy. This is why home safety is such a paramount topic to discuss. We need to understand what is a danger to us and how it can be avoided or monitored. 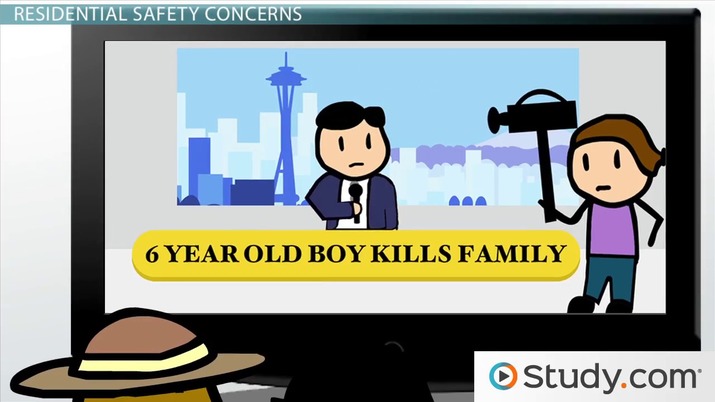 Coming up next: Workplace Safety: Definition and Precautionary Measures

Safety in and around the home is called residential safety. There are a plethora of things that are of concern to all of us in this respect. One of the leading causes of unintentional injury at home is poisoning. Pesticides, carbon monoxide, and alcohol can all cause these.

Carbon monoxide, by the way, is an odorless and colorless gas produced when people use equipment or material that burns substances. So, if you have stuff like a furnace, kerosene space heater, gas-cooking stove, fireplace, grill, car, lawn mower, or water heater, they may all produce this deadly gas, one that is far worse when released in closed environments, like a home and garage.

Furthermore, a pesticide isn't just something that kills insects but is technically defined as a substance that prevents, repels, or destroys any pest, such as an insect (insecticide), plant (herbicide), or fungus (fungicide). But the most common cause of poisoning at home is the use of illegal drugs or prescription drugs in a way they were not intended to be taken by a doctor.

Aside from poisonings, people get injured or die at home from other preventable causes. A very well-known example of this is falls. People may fall off of ladders when doing handiwork or down the stairs in the dark. Like the inappropriate use of a ladder may result in injury or death, the misuse of other tools and equipment results in injuries, such as when homeowners lose fingers and toes when not being careful around a lawnmower.

Heat, flames, and smoke cause some very tragic deaths and gruesome injuries around the country. Summer heat, especially for the elderly, can be extremely dangerous for even short periods of time. And whether in the summer or winter, a fire from a kitchen accident can burn a person, or worse, kill them. Many times it's not the flames that cause tragedy but suffocation from the smoke. In fact, in 2012 alone, there were 365,000 home fires with thousands of deaths as a result, and $5.7 billion worth of damage.

And even more regrettably than all of this, it seems, are firearm disasters at home. While the vast majority of firearms deaths at home are not an accident, be they due to a home intruder or otherwise, some firearms deaths are avoidable. You've more than likely seen the news where a little child somehow got access to their parent's gun, thought it was a toy, and ended up mortally wounding a brother, sister, mother, or father. These deaths are few but are very much preventable.

Precautionary measures can be taken to minimize the chances of all of the problems we discussed from ever occurring. However, you can't always prevent danger, but at the very least, you can install safeguards that allow a person enough warning to get out of a house that is becoming a danger. Let's talk about some things you can do to make your home safer.

All potentially hazardous items, such as prescription medications, alcohol, and pesticides, should be locked up and kept out of the reach of children to avoid accidental poisoning. Install carbon monoxide detectors so you don't die from this colorless and odorless gas. Ensure the home is well lit inside so you don't accidentally fall down the stairs at night, and put a handrail anywhere there are stairs to help prevent accidents. If you're going to be using a ladder to do some handiwork around the home, then ask a friend or family member to hold the ladder securely for you.

Always remember to turn off any equipment you're going to be fixing and unplug it from its power source so it doesn't accidentally hurt you. Furthermore, make sure your home has the following installed:

Additionally, get all appliances in good working order to prevent accidental sparks or flames, and teach everyone an appropriate fire escape plan for your home. The aforementioned steps can greatly reduce the chances of death from fire. And at the very least, these steps give you a warning sign to get out before it's too late. Finally, guns should be stored in locked safes, ammo and guns should be separated, and keys should be hidden far from where children can reach them.

Clearly, there's a lot to think about and do, but one little change on your part may one day, even unbeknownst to you, save your life or the life of someone you hold dear. Consider being more proactive about safety in and around the home, or residential safety. People can be poisoned by things at home, like carbon monoxide, which is an odorless and colorless gas produced when people use equipment or material that burns substances. This gas can be given off by everything from a fireplace to a grill to a car to a gas-cooking stove.

Pesticides have also hurt people at home. A pesticide is a substance that prevents, repels, or destroys any pest, such as an insect, plant, or fungus. Poisons, accidental falls, faulty equipment, fire, and firearms are just a few of the dangers facing you at home. To help counter them you can take preventative measures, like:

These are just a few of the many critical things you can do to help avoid disaster at home.

Once you are finished with this lesson you should be able to: