Resolution in literature refers to the point where the characters or story have reached a solution or gone as far as they can to try to reach a solution. Explore the definition and examples of resolution in works by Shakespeare, Hemingway, and Robinson. Updated: 10/11/2021
Create an account

When an author writes a story, she often begins by placing her characters in some sort of predicament. If it's a love story, the predicament might be that the boy and girl love each other, but the boy must go to war. If it's a murder mystery, a body might be discovered in a river, with no one certain how it got there.

Once this struggle in the narrative, or conflict, is established, the story has somewhere to go. The characters can begin trying their best to solve that conflict. Their efforts at doing so and the challenges they face along the way make up the body of the story. And when finally they reach a solution to the predicament, or reach a point where they can go no farther in trying to reach a solution and fail, the story has achieved what's called resolution. Nearly every published story offers resolution of some kind, though more recent literature has tended to favor ambiguous or subtle resolutions over those that solve the conflict too neatly. 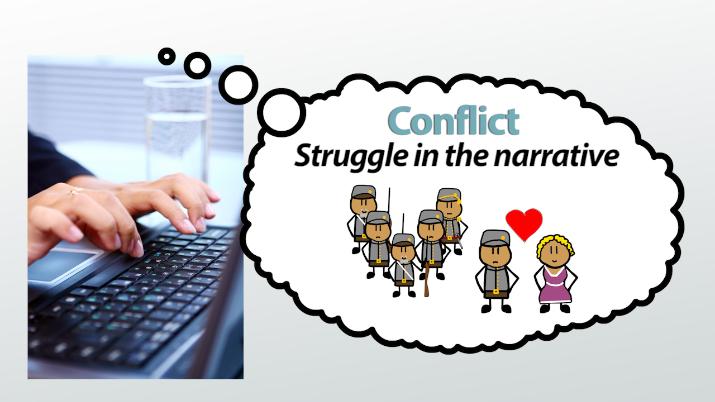 Conflict: In this famous play by perhaps the most famous writer in the history of literature, we meet a prince (Hamlet) whose father has been murdered by his uncle. Because he loved his father and is loyal to him, Hamlet must avenge his father's death by killing that uncle. Unfortunately, he is timid and uncertain, and given to abstract thought. He is not the kind of person who can decisively draw his sword and kill someone.

Resolution: Opportunity after opportunity arises for Hamlet to kill his uncle, and again and again he finds a reason to delay. Finally, though, the uncle hatches a plot to poison Hamlet and succeeds. When Hamlet learns that he himself has been poisoned and will die, he musters the courage and kills his treacherous uncle.

Why is this resolution? This constitutes a full resolution of the plot's central conflict because from the beginning of the play a question hangs over the action (does Hamlet have what it takes to kill his uncle?) and at the end, we get an answer (yes!).

Conflict: In the acclaimed first novel by American author Ernest Hemingway, we meet Jake Barnes, a young man who, due to a war injury, is unable to engage in sexual relations. Jake is in love with and has that love returned by Lady Brett Ashley, who is addicted to sex. While the two of them love each other very much, their relationship cannot succeed because one thing she needs is the one thing Jake can't give her.

Resolution: At the end of the book, after watching in vain as Brett sleeps with his friends, Jake realizes that the only reason she loves him is because he's never been in a position to disappoint her. In effect, the one thing he thought had kept them apart is the only thing that brings them together.

Why is this resolution? While this resolution is more ambiguous than the resolution in Hamlet, it is still resolution because the conflict has been removed from Jake's mind. All throughout the book, he'd struggled with the futile ambition of somehow getting together with Brett; but, at the end, that ambition is less of an issue because he has accepted its futility.

Conflict: The narrator in this novel introduces us to her sister, who wishes the family would become more cultured and civilized, and also introduces us to the aunt who takes care of the family, and wishes they'd become more carefree and relaxed, more 'wild'. The narrator herself loves both her sister and her aunt, and wants everyone to get along.

Resolution: While the narrator tries for most of the book to bring her sister and aunt together, and broker a compromise, she discovers eventually that their natures are simply too different. She must pick a side, and so she goes with her aunt and becomes a transient.

Why is this resolution? This is resolution because the narrator at the end of the book realizes that she will not be able to solve the conflict. As was the case with Jake Barnes, she simply accepts this, which in effect diffuses the conflict and resolves the story.

In most stories, the events are arranged as a progression towards the solution (or failed solution) of some central struggle, or conflict. As soon as that conflict is decided, or as soon as a solution becomes impossible, the story reaches what is called resolution.

A resolution can take any number of forms; but, to be a resolution, it must somehow diffuse the conflict. More recent stories have favored subtle resolutions over resolutions that clear up the conflict cleanly and completely.

After viewing this lesson, you should be prepared to define conflict and resolution in literature, as well as give examples of each.

How Literary Elements Affect the Central Conflict of a Text

Exposition in Literature Concept & Examples | What is Exposition?

Cumulative Adjectives Overview & Examples | What is a Cumulative Sentence?