Kenneth has a JD, practiced law for over 10 years, and has taught criminal justice courses as a full-time instructor.

Justice and punishment adopt modified manifestations under different judicial systems and theories of punishment. Compare and contrast retributive justice and restorative justice to discover their similarities, differences, and interactions. Updated: 01/13/2022
Create an account

Mark breaks into a home and takes several items. One of them is an old violin that belongs to Meg, the owner of the home. It wasn't in perfect condition, but her mother, grandmother, and great-grandmother all learned on this violin. Mark sells the violin to a pawn shop and gets $40 to buy drugs. Police eventually arrest him, and his fingerprints match those in Meg's home. Meg is now terrified and has to have people stay with her so she can live in her home. Considering the harm that Meg has endured, what is the best punishment for Max? What is the best result for Meg?

Before we can determine which punishment is best for either the offender or the victim, we must look at current theories of punishment. 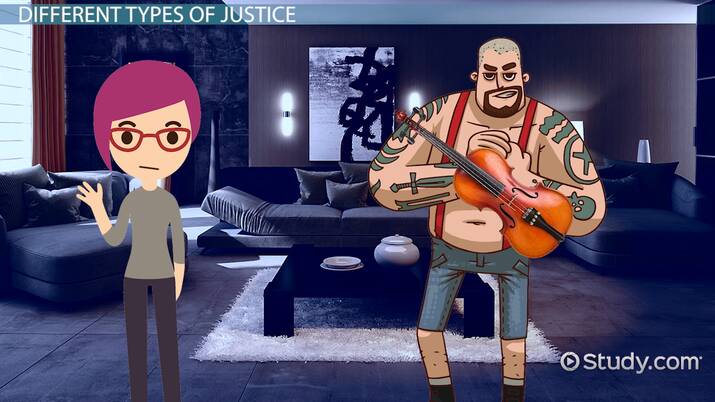 Coming up next: What is Punitive Justice? - Definition & Examples

Historically, punishment consisted of forms of corporal punishment like flogging, maiming, and death for crimes other than murder. It also included forms of public shaming like stocks and public flogging. But today, we look at those ways as barbaric and ultimately harmful to society. Over time, the jails that once held people until their punishment was meted out became themselves the primary means of punishment. Along with that change came multiple theories on what will work to reduce recidivism, or the re-offending of released offenders, and thus help lower crime.

Today we have many theories about what to do with convicted criminals. In essence, most (but not all) can fit into two camps, utilitarian and retributive. Utilitarian theories focus on the greater good of society, and any punishment should benefit the society as a whole. Furthermore, the punishment used should produce more good to society than the harm of the crime. Utilitarian theories are forward looking in that they look to what's best for society as a whole to keep crime down and people happy.

The flip side to the utilitarian approach is retributive punishment. Unlike utilitarian ideas, the retributive theory is backward looking in that it looks only at the crime and the surrounding circumstances before it deals out a punishment that fits the crime. The criminal should get his or her just desserts, meaning that the act itself carries a certain level of moral blameworthiness, and the punishment should be commensurate with that moral deficit. The criminal now owes a debt to society, and the punishment will pay for that debt.

What Is Restorative Justice?

Restorative justice doesn't fit neatly into either camp but, like the utilitarian approach, its goal is also to benefit society by its approach. The theory focuses on the harm done to the victim by healing the wounds and restoring the offender to the community that has been affected by the crime. This is done by implementing the four tenets of restorative justice, which we'll look at one at a time here.

So how does this work in real life? Remember Max and Meg? Max harmed Mag by violating her sense of security and taking her prized violin. With retributive justice, the court would look at what Max did, how much damage and harm he inflicted on Meg, and his past criminal record. Then Max would get a prison sentence the court feels matches his crime.

With the restoration method, Max, Meg, the court officials, police, and even Meg's friends and neighbors who feel personally affected by the crime would gather and discuss ways Max can make amends to Meg and even ask her for forgiveness. Meg would be able to ask Max questions to try and understand why Max did what he did. After all have had their input, the community would make a commitment to help Meg heal and to be open for Max to reintegrate into the community.

While most U.S. prison systems have replaced monikers like ''penal institution'' to more forward sounding names like ''correctional institutions,'' the focus is still primarily retributive. Restoration policies today are limited to trials and experiments with few, if any, institutions attempting to fully implement all of its tenets. To date, while many communities in the U.S. have some aspects of restorative justice models implemented as policy, most of these are limited to low-level criminal acts and first-time offenders.

The reason for this is in the nature of the restorative process. First, it's an ambitious endeavor to replace the incarceration-minded systems we have in place today. Secondly, critics point out that the process of restorative justice may have a difficult time working with hardened criminals who have committed violent offenses like murder, rape, and aggravated assault. The prospect of the victim sitting in a round table meeting with the person who raped them or murdered their child seems daunting and possibly ill-advised. With all of these criticisms, it seems unlikely that restorative justice will supplant traditional methods anytime soon.

All right, let's take a moment to review what we've learned. In this lesson, we learned about the different systems of justice that are all implemented in an effort to reduce criminal recidivism, or the re-offending of released offenders.

We first learned about utilitarian justice, in which there is a focus on the greater good of society, and any punishment should benefit the society as a whole. On the other hand, retributive justice is a theory that the goal of punishment for criminal violations is for the offender to pay his or her debt to society. The focus is on matching the punishment to the crime and addressing the moral blameworthiness of the offender, meaning that this is a backward-looking concept. This is unlike restorative justice that looks to the future of both the offender and the victim, meaning it's forward looking.

Restorative justice seeks to gather all those concerned with the offense and institute a process that aims to bring about forgiveness, healing, and reintegration. Finally, we learned that the four tenets of restorative justice are as follows:

What is Punitive Justice? - Definition & Examples

The Role of Religious Movements in International Politics