Revenge is prevalent as a motivating factor for many of the characters in Beowulf. We are introduced to Grendel, who is angered and seeks revenge, we see Grendel's mother lash out as only a mother can, and we watch Beowulf as he seeks revenge against the dragon. The action in the lines and details has us contemplating the timelessness of the poem. It is no different than the Kill Bill movies, in which the main character seeks revenge for wrongs done to her. 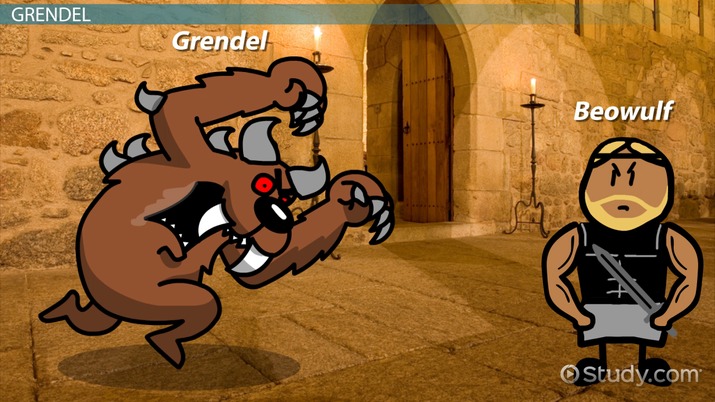 Coming up next: Biblical Allusions in Beowulf

In the beginning of the poem we are introduced to Grendel, a monster on a tear. He hates Heorot because it represents everything he finds repulsive in mankind. He hates the Danes' singing, their joy, the fact that God has favored them. For twelve years he makes his presence known, making mead hall uninhabitable.

'A powerful monster, living down
In the darkness, growled in pain, impatient
As day after day the music rang
Loud in that hall, the harp's rejoicing
Call and the poet's clear songs, sung
Of the ancient beginnings of us all.'

Grendel is determined to make the Danes pay for their misdeeds and their love of life. He is successful until Beowulf comes on the scene to rid the hall of Grendel once and for all. In the battle between Grendel and Beowulf, the monster is mortally wounded. He manages to flee, but does not survive.

'Beowulf had been granted new glory: Grendel escaped,
But wounded as he was could flee to his den,
His miserable hole at the bottom of the marsh,
Only to die, to wait for the end.'

Once Grendel is dead, the Danes have their revenge for the pain and humiliation Grendel caused by making the mead hall uninhabitable for so many years. The men are now able to return to their hall without fear.

There is no anger worse than a mother who has lost her son, and Grendel's mother is no different. Her anger over the death of Grendel is immense and it fills her with the need for revenge. She is determined to bring all of her wrath down on the heads of those who have hurt her. She takes her anger and need for revenge into mead hall. She comes into the hall determined to inflict as much pain as she feels. Her first act is to kill one of the Danes and capture another.

'Her visit ended their good fortune, reversed
The bright vane of their luck. . .
Took a single victim and fled from the hall,
Running to the moors, discovered, but her supper
Assured and sheltered in her dripping claws.
She'd taken Hrothgar's closest friend.

Her rage knew no bounds. As she terrorized the mead hall, the men quaked in fear and did their best to run from her. When she entered intent on wreaking havoc, the men scattered and scampered for a place to hide from her vengeance. This did not deter her in the least. She was undaunted in her task to seek revenge for the death of her son. She intended to take out as many men as she could, and even this did not calm her anger.

Hrogthar knows that he must call on Beowulf once again to solve the problem. Beowulf will fight again to avenge the death Grendel's mother has caused. He battles her fiercely, but she flees. He tells Hrogthar that:

'It is better for a man to avenge his friend than to mourn too much.'

Beowulf will not stop until she is dead. In her lair, Grendel's mother feels her anger pulse and rise because she knows this is the man who took her son's life. Beowulf is not to be defeated. His skills as a warrior are second to none. The monster ends up dead, and the people are once again safe and free to gather without fear.

This monster provides us with an interesting tale filled with vengeance and treasure. According to the story, a dragon has been sleeping in his cave filled with treasure for three hundred years when a man stumbles into the cave. Seeing the treasure, he cannot stop himself from stealing a cup. The dragon awakens, and his anger is boundless. He leaves his cave and begins to destroy everything in his path to calm his anger. He destroys houses and people without missing a beat, and one of the homes he destroys is Beowulf's.

Beowulf had been reining as king for the past fifty years. When his home is destroyed, he uses the slave who took the cup to find the dragon's cave. He knows this will be his last battle, but he is determined to have revenge for the destruction the dragon has caused.

'The beast rose, angry,
Knowing that a man had come.'

Beowulf and the dragon fight to their deaths. It is an epic battle of revenge. Beowulf is fighting to avenge the people whose lives the dragon has ruined, and the dragon is determined to right the wrong of the theft from his home.

'After many trials,
He was destined to face the end of his days
In this mortal world; as was the dragon,
For all his long leasehold on the treasure'

While it is true that there was much wrong done (people were killed and property was destroyed, all in the name of revenge and vengeance) it is also true that there were no real winners. In fact, what we learn is that everyone suffers in the end.

Revenge and vengeance are the major recurring themes in Beowulf. We are introduced to characters who must battle to right what they see as wrongs. Grendel terrorizes the mead hall because he can't stand the singing and lute playing; there is too much joy. Grendel's mother is blinded by the loss of her son, and she won't stop until she feels like she has avenged his death. We also see Beowulf fighting to make sure that the pain caused by others does not go unpunished. What we learn is that revenge is a lonely task, and that everyone suffers in the end. The pain caused by all is large and never ending.

Examples of Personification in Beowulf

Role of Women in Beowulf