The power of sin and guilt are central themes in Nathaniel Hawthorne's 1850 classic, 'The Scarlet Letter.' This lesson explores Hawthorne's portrayal of revenge in the novel, and his suggestion that vengeance may be one of the greatest sins. Updated: 04/22/2021
Create an account

Revenge as a Cancer

In The Scarlet Letter, Hawthorne tells the story of an extra-marital affair between two members of the Puritan community of Massachusetts Bay Colony during the 1640s. When Roger Chillingworth, Hester's long-lost husband, arrives in the colony and discovers the affair, he is consumed by a desire for revenge.

For Hawthorne, revenge is a devouring cancer, destroying the mind, body, and spirit. In the havoc it creates, revenge proves itself perhaps one of the greatest sins described in the novel. 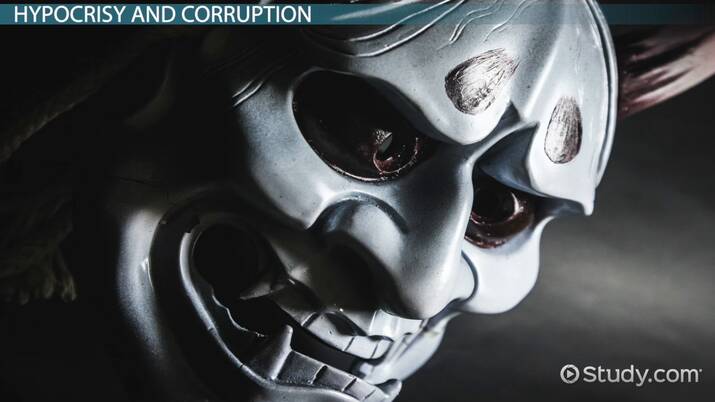 Coming up next: Isolation in The Scarlet Letter

Roger Chillingworth once loved Hester, but with the clumsy kind of love a bookish, middle-aged man has for a much younger and very beautiful woman. It wasn't reciprocated, at least, not as it maybe should have been. The couple leave England and settle in 17th-century Puritan New England, which was dedicated to the purification of religion and life through the strict application of the Christian scripture.

Chillingworth disappears during a voyage from England to Massachusetts Bay Colony, and he is presumed dead. Alone in New England, Hester falls in love with Reverend Arthur Dimmesdale and discovers true love and true passion.

Chillingworth returns, unrecognizable after years of captivity with the Native Americans, and finds his wife on a scaffold, the scarlet ''A'' signifying adultery sewn onto her dress, and another man's infant, Pearl, in her arms. Unable to associate himself with Hester's shame and reveal his identity as the husband she publically wronged, he assumes the name Roger Chillingworth and begins plotting his revenge against Hester's unnamed lover.

Thus begins the slow, diabolical transformation of Roger Chillingworth. Even the name he takes is pretty accurate. He does grow very, very cold.

Hester refuses to name her lover, and Chillingworth, once a brilliant scholar, vows to discover it and to take his revenge. It doesn't take long before he figures out it's Dimmesdale. Overcome by his own guilt, Dimmesdale grows weak and sickly, and Chillingworth, posing as a doctor, rarely leaves his side.

One of the worst aspects of revenge, Hawthorne suggests, is its hypocrisy. Revenge seeks to right a wrong by committing an even greater wrong. Yes, Chillingworth is a wronged man who suffers when he learns Hester has been unfaithful.

But what does he do? He cozies up to a man tormented by guilt; he pretends to be his friend and healer, but intends only harm. He becomes as false and two-faced as the man he hates. Revenge turns a righteous man into a hypocrite.

Hawthorne's novel graphically traces Chillingworth's deterioration. The more Chillingworth fixates revenge, and the closer he gets to Dimmesdale, the more demonic he becomes. His soul is consumed by a thirst that will never be satisfied. The sight of Dimmesdale's physical and moral agony delights him. More than once the pleasure he takes in Dimmesdale's suffering is compared to the delight of the fiend or of Satan.

Perhaps this would not be so bad if Chillingworth had been born bad. But we don't have that comfort as readers. Every indication is that Chillingworth had lived a quiet, moral life. Yes, he may have been a bit aloof to his wife, holed up with his books and his academic work, but he wasn't a devil. He didn't delight in another's pain, and he certainly didn't delight in inflicting pain. Not until the germ of revenge contaminated his spirit.

Hawthorne demonstrates how corrosive revenge is when he chronicles Chillingworth's physical deterioration. The man literally shrinks; his body buckles beneath the weight of his hatred. He begins to look like an imp, like a devil's mask. Revenge is eating its way from the inside out like a cancer.

Revenge also ties us inextricably to the person we most hate. Chillingworth hates Dimmesdale. Yet his thirst for revenge means that he can never be free of Dimmesdale. So bound up is he in Dimmesdale, that he eventually moves in with him, in the guise of caring for him as the kindly physician. They are so connected that Chillingworth dies less than a year after Dimmesdale.

Revenge, Hawthorne suggests, annihilates the person seeking it. When we seek revenge, we become the reflection of that which we hate. Like Chillingworth, when we destroy our target, we also destroy ourselves.

Dimmesdale's guilt is magnified in Chillingworth's presence; his physical decline and subsequent death sped up by Chillingworth's toxic presence. Hester is tormented. Wherever Chillingworth goes, there follows a disquiet and a pollution of the soul. Chillingworth's lust for revenge has consumed every trace of humanity he ever possessed, leaving nothing behind but the Black Man.

Chillingworth also exemplifies the corruptions of revenge; physically, morally, and spiritually, Chillingworth deteriorates until all that's left of him is his thirst for vengeance and his joy in the suffering he inflicts on Dimmesdale.

Chillingworth has become a demon, very much like the legendary satanic ''Black Man'', a demon trying to possess people's souls. Chillingworth's relationship with Dimmesdale demonstrates that revenge binds us with that which we hate. Chillingworth's every thought, feeling, and action are wrapped up in Dimmesdale, so much so that he ceases to exist on his own. He dies less than a year after Dimmesdale.

Romanticism in The Scarlet Letter

Figurative Language in The Scarlet Letter

Allusions in The Scarlet Letter