In 1945, the Japanese had been beaten in China, but the war in that country was far from over. For more than a decade, the Communists under Mao Zedong and Nationalists under Chiang Kai-shek had an uneasy ceasefire, agreeing to focus instead on defeating foreign invaders before destroying each other. By 1945, that was effectively just an agreement to stay out of each other's way.

Despite American attempts to broker an agreement the following year, both Chiang and Mao insisted on supremacy, leading to a revival of hostilities. Both the Americans and the Soviets supported their respective allies, but by 1949, it was clear that the Communists had the upper hand. Late in 1949, the Nationalists were forced into exile in Taiwan, while Mao declared the People's Republic of China. 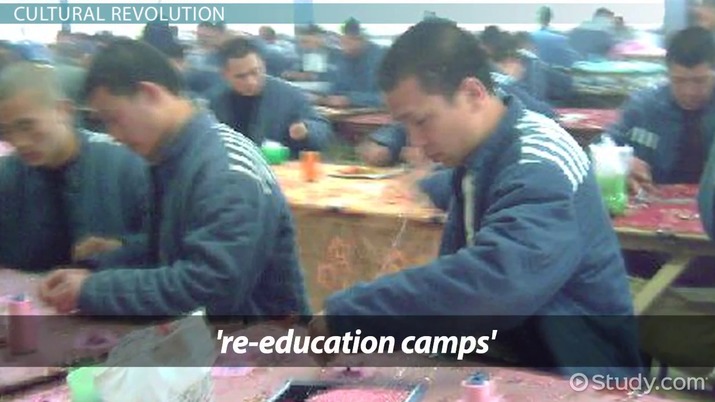 Coming up next: What is Democracy? - Definition, Types & Principles

Already popular, but faced with a country that had been ravaged by war for decades, Mao worked to implement his Communist vision for China. In the first Five Year Plan, Mao was able to bring tangible economic results to China. By the late 1950s, he was ready to offer another solution, one designed to press China ahead of the United Kingdom and United States in terms of economic potential.

He offered his Great Leap Forward as a solution. Under this plan, land would be taken over by the state and worked in a series of agricultural communes. This was, after all, central to the Communist ideal. Additionally, increased manufacturing would be a vital target. However, Mao treated people largely as widgets, easily replaceable no matter the role. As a result, farmers ended up being told to build factories, while engineers and industrial designers were forced to grow rice. Perhaps the most embarrassing of these were the implementation of backyard furnaces, which tried to produce industrial-quality steel in kilns that could fit in someone's backyard.

When both groups failed, it was viewed as a lack of devotion to the movement, not a lack of required skills. The resulting famine killed tens of millions people, a sizable chunk of China's population. By the end of the Great Leap Forward, China had little to show for it. Mao was disciplined, but privately within the confines of the party.

China inched towards capitalization, but Mao saw that this threatened his idea of Communism in China. Proclaiming that all who opposed his methods were capitalists and therefore subversive, he launched the Cultural Revolution.

If the Great Leap Forward effectively paralyzed economic growth, the Cultural Revolution threatened the very heart of Chinese culture. Intellectuals were persecuted, with offenders either executed or sent to 're-education camps' where they were brainwashed. The same mistakes of the Great Leap Forward were repeated, but this time with a heavier dose of secret police and not-so-secret military units enforcing order.

Mao finally died in 1976, causing an end to the Cultural Revolution. In the words of his opponent and successor, Deng Xiaoping, Mao was 'seven parts right and three parts wrong.' Deng would soon have the opportunity to prove himself.

Deng to the Rescue

Deng had opposed Mao during the Cultural Revolution and was ready to seize the chance to take power and implement his own plans. Deng had a very different idea of Communism in China, and due to the divide between the USSR and the Chinese, he now had the power to make it happen.

Deng called his version Socialism with Chinese Characteristics and provided for greater incentives through private ownership. This meant that people were allowed, and actually encouraged, to make money through their own efforts instead of relying solely on the state. The state still maintained a heavy hand in the economy, but this time, people would be encouraged to engage in those activities which offered the largest possible payout.

For example, engineers would no longer be forced to work on farms in order to prove their loyalty, but instead could be engineers. As one might expect, this made the economy more productive. Meanwhile, few political rights were ceded. In fact, the Tiananmen Square Protests showed just how effectively the Communist government could deal with dissent.

But greater economic freedom made some Chinese people care significantly less about other rights. After all, how much does a vote matter if the current government has helped your family move from a peasant's life on a rice paddy to having a car and a TV, and the chance to send your children to college? At least, that's the Chinese Communist mindset that many Chinese citizens had and still maintain to some degree.

In this lesson, we talked about how China changed from the end of World War II until the economic liberalizations of Deng. We saw how the Nationalists were forced to retreat to Taiwan, giving the Communists power over mainland China.

Following the successful Five Year Plan, Mao instituted the Great Leap Forward. Due to horrible planning and implementation, the Great Leap Forward really proved to be more of a great stumble backwards. Mao lost some influence as a result, but regained enough to launch the Cultural Revolution, which in turn destroyed much of Chinese culture.

Finally, with the death of Mao, Deng came to power and was able to greatly liberalize the Chinese economy, using the philosophy of Socialism with Chinese Characteristics. However, the suppression of demonstrations at places like Tiananmen Square showed that this new China was no less oppressive.

Take a moment now to cement what you learned:

The Holocaust: Antisemitism and Genocide in Nazi Germany

What Was the Mandate System? - Definition & WWI