In psychology, the risky shift phenomenon and mob mentality go hand in hand. Learn how through the definition of risky shift, its relation to individual and group mentality, and looking into risky shift theory and common examples. Updated: 11/23/2021
Create an account

What Is a Mob Mentality?

Everyone has personal opinions that may stand apart from the norm in some cases; however, in group settings, the opinions of group members may change to be far more extreme than any individual member. Upon leaving the group, these opinions may remain. Risky shift phenomenon explains why this sometimes happens, but let's jump back.

Have you ever heard the term mob mentality? It comes up often in discussions of riots or gang violence, where a group of average people commit crimes that would be unthinkable for average people. Scientists, like sociologists and social psychologists, study how group dynamics influence people's behavior and ideas. Some explanations for mob mentality involve an element of behavior that social psychologists and sociologists call the risky shift phenomenon. Let's look at specific example here.

This is not exactly a real, angry mob but these figures typify what most people think of when a riot or mob is discussed. The risky shift phenomenon explains how ordinary people can become this angry in some situations. 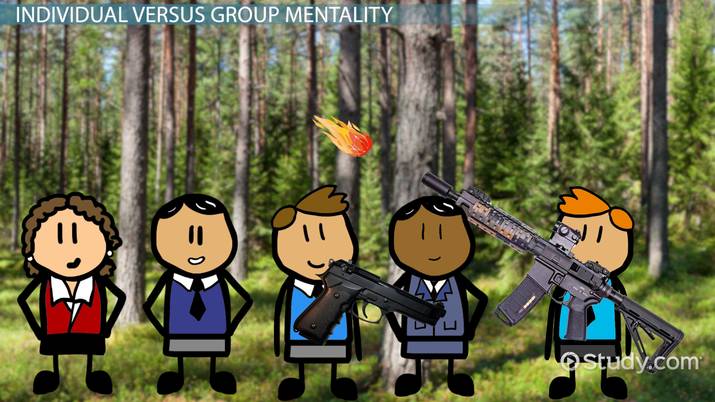 Coming up next: Collectivism: Definition & Examples

The term risky shift generally refers to a change in group attitude that raises the chance for negative consequences. The principle has been found to apply to more than just risky changes. Some psychologists prefer the term choice shift, which is a change in group decisions compared to the individuals that make up the group. There is such a thing as a cautious shift, which represents safer attitudes taken on by the group. All kinds of shifts are changes in attitudes. Attitudes inform our decisions, and any kind of shift can lead to group acts that an individual would never have thought of on his/her own. Furthermore, some of these changes in choices at the individual level can be relatively permanent.

This is fairly counter-intuitive and needs a bit of explanation. People come together in groups for a variety of reasons. Some of these reasons are political, social, or to manage a crisis situation. Among all of these reasons, there are a variety of ways people can feel about an issue. Whether a moderate person or an extremist, each person gets an idea of where their views fall through interaction with the rest of the group. Through risky shift, people that are generally moderate in their beliefs can become more extreme. It is important to note that these shifts tend to occur in groups that more or less agree. If there are extreme differences of opinion, choice shifts do not occur.

Theories are models that explain a phenomenon in science using the available evidence. There are two major theories regarding risky shifts. These theories have been discussed at length and neither of them seems to be more or less correct than the other. At the same time, both theories have been demonstrated to cause choice shifts on their own, or in combination with one another. It is important to note that there are other theories than these two, but these are the ones most prevalent and the theories against which others are measured.

Each of the theories will be followed by an example. Let's set up the example here: A fast food restaurant is developing a new burger. Before releasing it for taste trials to customers, they decide to let a select group of their employees sample the burger and provide feedback. A random group of 50 employees are invited to branch headquarters for a luncheon event. Sample burgers are given out, and the employees are left to mingle and discuss their thoughts at the lunch. Todd, an average 19-year-old employee, is invited to the lunch.

After sampling the new burger, Todd finds he doesn't really care for it. On the other hand, he doesn't hate the flavor either. Todd finds he is not alone in his opinion, as many other employees don't like it. According to social comparison theory, Todd may find his opinion of the burger worsening as he comes to identify himself with the group of taste testers. As a taste tester, Todd comes to feel it is his duty to be honest about his opinions. Even though his real opinion of the burger is that it isn't terrible, he becomes one of the leading voices of dissent within the company, urging them not to adopt this terrible tasting product.

Next, we have the persuasive argument theory, or informational influence theory. In this theory, we have groups consisting of individuals who communicate with one another, just like social comparison theory. Unlike social comparison theory, the driving force between attitude change is not social standing, but a reinforcement of pre-existing bias. We begin with people that have ideas and preferences before meeting the rest of the group. Through interacting with the group, people listen to other people's reasons for believing what they do. In some cases, group members will already believe the same thing but have different reasons for doing so. It is the exposure to other people's arguments in favor of the same thing that sways group opinion to such extremes.

In the case of persuasive argument theory, through interacting with other taste testers, Todd heard several different opinions on why people didn't like the burger. While Todd though the new sauce with the burger was what he didn't care for most, other people hated the sourdough bun. Still, others felt the sauce would have been good on grilled chicken but not a beef patty. After hearing those other dissenting opinions, Todd comes to believe that the burger is terrible. According to persuasive argumentation theory, the other taste testers' opinions moved Todd's opinion to dislike the burger in a way he would not have by himself.

Risky shift phenomenon is a change in group attitude that raises the chance for negative consequences. It's part of the study of choice shift. In this phenomenon, individual opinions can change to be stronger with the input of a group. There's actually also such a thing as a cautious shift, which represents safer attitudes taken on by the group. These shifts in opinions are on the individual and group levels. The group will have stronger opinions than the average individual, and the individuals may change their opinions to be in line with the group. The two major theories explaining choice shift are social comparison theory, which looks at group dynamics and how individuals seek to belong to a group, and persuasive argumentation theory, also know informational influence theory, where the driving force between attitude change is not social standing but a reinforcement of pre-existing bias. Both explain facets of the phenomenon, and both can cause a choice shift on their own, but usually both are present in most situations that generate a shift.