Charis has taught college music and has a master's degree in music composition.

The ritornello, which means 'little return' in Italian, was a popular Baroque compositional device. Explore the definition and form of the ritornello, focusing on its development and role in both vocal and instrumental music. Updated: 10/17/2021
Create an account

It's the year 1710, and on a trip to Venice, you just heard the most wonderful new composition by Antonio Vivaldi. You want to hear it again. You quickly scan the Venetian concert schedule for the week, but alas, there are no more Vivaldi concerts planned. It is not possible for you to hear this beautiful music another time. Fortunately, Vivaldi is a master of the ritornello, so the lovely melody lingers in your memory long after your return home.

The ritornello, Italian for 'little return,' is one of the most frequently used compositional techniques and it involves a musical theme that returns repeatedly, with sections of different music in between each return. Imagine we are diagramming the sequence of themes in a composition using letters. For example, if we use the letter ''R'' to represent the ritornello and the letters ''A'' and ''B'' to represent different musical sections, we can diagram a piece with a ritornello in this manner: R A R B R A R.

You can see that the piece begins and ends with the ritornello and that the ritornello is played again between each section of music. While this is a common example of the ritornello form, composers were not bound by this and would experiment with the number of returns and where they were placed. However, the basic behavior of the ritornello stays the same, being repeated at least a few times, and appearing between contrasting sections of music. 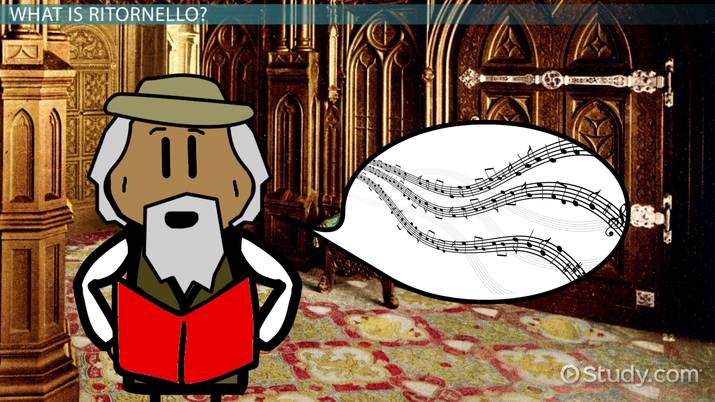 Coming up next: Ballet Dance Terminology and Key Concepts

The Development of the Ritornello

Scholars are unsure about when exactly the ritornello was developed. However, it's generally accepted that the technique didn't become popular until the Baroque period, which lasts roughly from 1600 to 1750.

Its direct lineage is not certain, but songs of the Medieval Period often used refrains, that is, chorus sections repeated after each verse, and the ritornello may have been derived from those refrains. Composers were quite fond of the ritornello form because it gave the audience the opportunity to hear the main theme more than once and imprint it into their memories.

Remember, this was before recording technology existed. Listeners could only hear a piece in live performance, so extra repetitions of the ritornello theme helped ensure audiences could recall the piece after the performance.

The Ritornello in Vocal Music

There are countless examples of this use of the ritornello. George Friedrich Handel, Johann Sebastian Bach, and Claudio Monteverdi are three important composers who employed ritornello in their arias. Handel's arias Lascia ch'io pianga and Where'er You Walk are good examples. The Bach aria Können Tränen meiner Wangen has a slight variation with two parts in the ''A'' section separated by the ritornello.

The Ritornello in Instrumental Music

After the Baroque period ended around 1750, the ritornello began to fade in popularity. The Classical Period developed new and different forms. Many of these are founded upon the return of musical ideas, including rondo and sonata form, and these perhaps owe some debt to the ritornello form.

The ritornello, borrowed from the Italian for 'little return,' was a popular compositional device during the Baroque Period, which lasted about 1685-1750. The ritornello is a musical idea that is repeated numerous times with different musical material in between each return. It was used in operas and cantatas, and in instrumental music, such as concerti. J.S. Bach, Vivaldi, Handel, Corelli, Torelli, and Monteverdi are among the important composers who used it. By the beginning of the Classical Period, the ritornello fell out of favor and composers instead turned to new repetition based forms such as the rondo and sonata.