Lesson Transcript
Instructor: Jennifer Gilley
During DNA replication, an RNA primer serves as a starting point for DNA polymerase, which builds complementary DNA. This lesson will focus on the sequence, function, and definition of the RNA primer during this process.
Create an account

Our cells use both DNA and RNA to make the various proteins required for daily cellular activities. DNA and RNA are made up of different sequences of nucleotides, or genetic building blocks. Adenine (A), cytosine (C), and guanine (G) are nucleotides found within both DNA and RNA. However, only DNA contains thymine (T), and only RNA contains uracil (U). 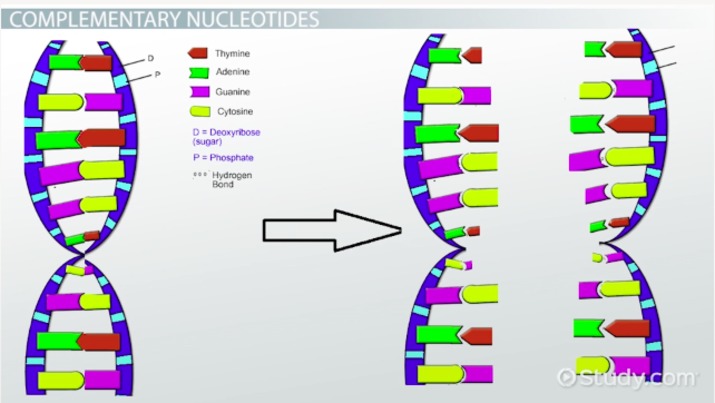 Now that we understand how complementarity works in DNA and RNA, we can begin to understand how our cells make copies of DNA when necessary. Our cells age and constantly need to be replaced by new cells. For this to happen, the cell must first make a copy of the DNA before a new one is produced through cell division. This ensures that the new cell will have the full set of DNA found in every other cell. DNA replication is the term for the process that copies our DNA before a new cell is made. During this process, the DNA must first be unwound or unzipped from its complementary strand. Then each strand is used as a template to build a new complementary piece of DNA. In the figure seen here, the red strands of DNA represent the original pieces of DNA, and the pink strands signify the new complementary pieces of DNA that are built during replication.

At the end of replication, each set of DNA consists of one original strand and one new strand.

The Role of RNA Primers

After DNA polymerase finishes building the new DNA, another enzyme will come in and remove the RNA primers before replacing them with complementary DNA nucleotides. At the end of this process, all that remains are two copies that lack any RNA.

Let's review. Both DNA and RNA are made up of certain nucleotides that act as the building blocks of the genetic code. Each nucleotide has another complementary nucleotide that it pairs with. In DNA, adenine pairs with thymine, and guanine pairs with cytosine. In RNA, adenine pairs with uracil, and guanine pairs with cytosine. During DNA replication, two original complementary DNA strands are separated, and each is used as a template to create new DNA. DNA polymerase is the enzyme responsible for building new complementary DNA. However, it requires the presence of an RNA primer, which serves as a starting point for replication. Each primer is a short piece of RNA that is complementary to the original strand of DNA. Without a primer, DNA polymerase cannot copy the DNA. In short, RNA primers serve as a start site for DNA polymerase when DNA needs to be copied. Once the DNA has been copied, the primers aren't needed anymore and are, therefore, removed.

Gastrula Stage & Concept | What is Gastrulation?