Eukaryotic cells have unique considerations for gene regulation that differ from those for prokaryote cells. Learn about these differences, understand introns and exons, and explore RNA processing in a eukaryotic cell through the splicing of introns and exons. Updated: 08/17/2021
Create an account

All living things have methods for regulating their genes by controlling when and how their genes are expressed. When scientists first learned about gene regulation, they studied the bacterium E. coli and one of its gene clusters: the lac operon. Scientists used the lac operon to study gene regulation. Their research revealed plenty of information about the regulation of operons, but it didn't tell them much about the regulation of human genes. After all, we humans don't have operons. Humans, remember, are eukaryotes.

Unlike the prokaryotic bacteria, eukaryotes don't have clusters of related genes. Our genes are scattered throughout the genome over multiple chromosomes. Also, our cells contain a nucleus, meaning that we have to perform transcription and translation separately. Transcription has to happen in the nucleus, but translation must occur in the cytoplasm. So, unlike prokaryotes, eukaryotes undergo an RNA processing step right after transcription and before translation. RNA processing is a challenge that's unique to eukaryotes because only eukaryotic cells have a nucleus. In this lesson, we'll walk through the most important aspects of RNA processing. 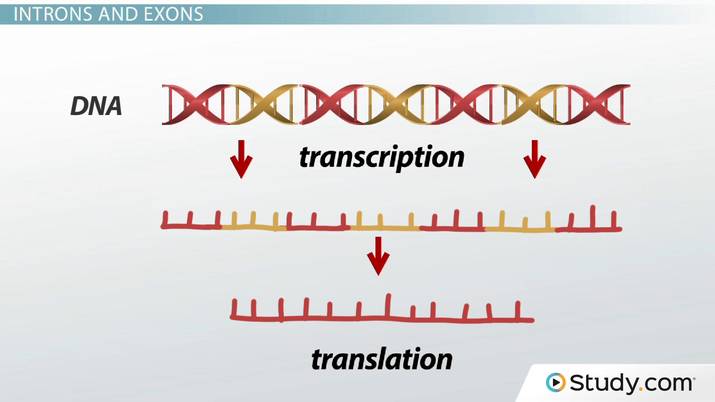 Coming up next: What Is the Genetic Code That Translates RNA Into Amino Acids?

In between all the exons lie the other segments, called introns. Introns are the intervening sequences that are removed from a gene before the RNA product is made. Introns and exons alternate with each other along the length of a gene. Introns are usually considered non-coding regions because they don't seem to code for any enzymes or structural proteins. However, scientists are still learning about the importance of introns. One thing we do know is that introns are removed from an RNA sequence right after transcription. They exist in DNA, they're transcribed into RNA, but then they're taken out before the RNA has a chance to make any products.

So, exons hold the important coding regions of our genes, and introns aren't much more than extra fluff. How do we get hold of only the good stuff? How do we separate the wheat from the chaff? The RNA strand is processed so that its introns are removed and the exons are pushed together to make a continuous, shorter strand. This process is called RNA splicing. It produces a 'final draft' of the mRNA before translation gets under way. RNA splicing is the removal of introns and joining of exons in eukaryotic mRNA. It also occurs in tRNA and rRNA.

Splicing is accomplished with the help of spliceosomes, which remove introns from the genes in RNA. Spliceosomes are composed of a mixture of protein and small RNA molecules. They locate the ends of the introns, cut them away from the exons, and join the ends of adjacent exons together. Once the entire gene is devoid of its introns, the process of RNA splicing is complete.

What is the point of RNA splicing? Why do we have introns in the first place if we're only going to remove them later? When scientists first discovered introns, they didn't think there was any reason for having them in our genes. They originally called the introns 'junk DNA.' But, further research revealed that introns play an important role in gene expression. They separate the coding regions of the gene and allow different combinations of exons to be spliced together. In other words, a single gene is capable of coding for more than one protein. This principle is called alternative splicing.

Take a look at the sample eukaryotic gene below. It has four different segments that can be spliced in alternative combinations. One combination counts the green segment as an intron and removes it from the mRNA. The resulting protein is translated only from the red, yellow, and blue gene segments. A different combination counts the yellow segment as a removable intron and the green segment as a translatable exon. Each combination yields a different protein, both of which were translated from the same gene. Scientists are just beginning to understand the possibilities presented by alternative splicing. Therefore, we are still learning about the role of introns in our genes.

Once all the introns are spliced from the gene, then it's time for the mRNA to move out of the nucleus. This will allow it to begin translation in the cytoplasm. To leave the nucleus, the mRNA must pass through the double lipid bilayer of the nuclear envelope. You may recall that a lipid bilayer is like a dense forest riddled with protein complexes. The mRNA strand needs protection to pass through this double membrane. It also needs some form of identification so that ribosomes will recognize it on the other side. The mRNA protects and identifies itself by adding extra nucleotides to both ends of the strand.

Recall that an RNA strand has a 5' end and a 3' end. During RNA processing, a specialized guanine nucleotide is added to the 5' end. This is called the 5' cap. To the 3' end is added a long chain of adenine nucleotides, which is called the poly(A) tail. The 5' cap and the poly(A) tail are extra modifications to the mRNA strand. Even though they're made of nucleotides, they don't actually code for proteins.

They simply act like a uniform worn by a referee in a football game by protecting the mRNA from attack by cellular enzymes and identifying it as an important element in the game of gene expression. Capping and tailing occurs inside the nucleus, right after transcription and RNA splicing. Once the mRNA moves out into the cytoplasm, ribosomes use the cap and tail to recognize it, bind to it, and begin translation. RNA capping and tailing are special adaptations found only in eukaryotes. This is because only eukaryotic cells require mRNA to travel through the nuclear membrane.

The Maturation of mRNA

To see how all these processes fit together, let's take a sample gene from the top. Here's our old friend, the keratin gene, just sitting here in the middle of a DNA strand. Right now, it's in the nucleus, and transcription is about to occur. Transcription of the keratin gene produces a complementary mRNA, complete with all the introns and exons found in the original gene. This form of the mRNA is called precursor mRNA, or pre-mRNA. This is the form of mRNA before any RNA processing occurs.

Pre-mRNA contains more nucleotides than are needed to code for a protein. So, with the help of spliceosomes, the introns are removed and the exons are joined together. Next, a 5' cap and a poly(A) tail are added to the ends. Now we call the mRNA mature mRNA. It's the final, shorter version of mRNA that's ready for translation in the cytoplasm. Mature mRNA travels through the nuclear envelope, binds with ribosomes, and begins to translate its code into proteins.

After the mRNA leaves the nucleus, additional regulatory mechanisms take place. These mechanisms may occur during translation, after translation, and even following protein synthesis. As you can see, RNA processing is just one way that gene expression is regulated in a eukaryotic cell. But, the only mechanisms we need to understand here are the splicing, capping, and tailing that comprise RNA processing.

The regulation of gene expression differs between prokaryotes and eukaryotes. Eukaryotic cells possess a nucleus bound by a membrane, and their genes consist of alternating introns and exons. Therefore, the immature pre-mRNA must be processed before it leaves the nucleus.

RNA splicing is the removal of non-coding introns and the joining of exons by spliceosomes. The presence of introns is thought to assist gene regulation by way of complex methods like alternative splicing.

After splicing, a 5' cap and a poly(A) tail are added, and this 'final draft' is called mature mRNA. Splicing, capping, and tailing comprise RNA processing in the nucleus. Once the mature mRNA moves into the cytoplasm, it begins translation and undergoes other forms of gene regulation.

DNA Sequences in the Human Genome

Examples of Transcription Regulation in Eukaryotes

Cystic Fibrosis: Cause, Progression, and Treatment