''Man from the South'' is a short story by Roald Dahl about a bet between two men where one man stands to gain a Cadillac, but risks losing a finger. Explore a summary of the story's events and analyze its themes and character. Updated: 01/19/2022
Create an account

What would you be willing to bet for the chance to win some prized item? Roald Dahl explores this idea in 'Man from the South,' originally published in 1948.

It's narrated by an unnamed person who sits at a poolside table one evening at a hotel in Jamaica, enjoying a beer, a cigarette, and the evening sun. We don't know who this person is, where they're from, why or where they are in Jamaica, or even their gender.

The narrator watches some young men and women in the pool, whom he calls girls and boys. He thinks the women are English and from the hotel, but guesses the men are American naval cadets from the Navy ship he saw in the harbor that morning.

A small older man in a white suit and Panama hat appears and, with a heavy accent, asks to sit next to the narrator. 'Excuse pleess, but may I sit here?' The older man comments on the enjoyable Jamaican evenings and on how loud Americans are. The narrator decides he must be from somewhere in South America. 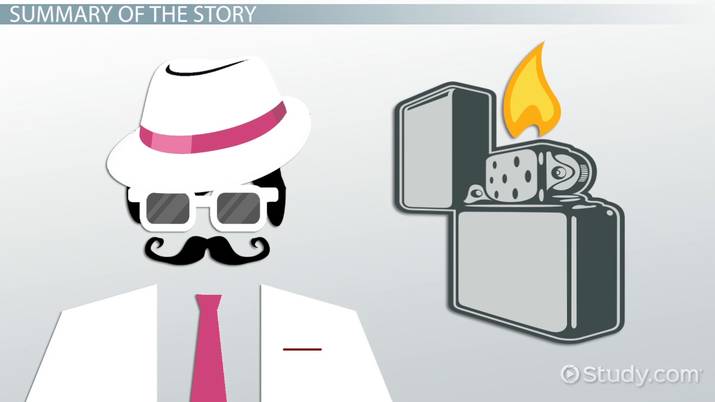 Coming up next: Going Solo by Roald Dahl Lesson Plan

Summary of the Story

The South American doesn't think the lighter will work in the windy weather, and when the American insists it always does, the older man proposes a bet. 'Shall we not make a little bet on whether your lighter lights?'

If the American can light his lighter ten times in a row, the South American says he'll give him his new green Cadillac. The boy wants to know what happens if he loses. The man says, 'I never ask you, my friend, to bet something you cannot afford. You understand? . . . perhaps, de little finger of your left hand.'

Despite the disapproval of the narrator and the English woman, the American eventually agrees, and the four go up to the older man's room in the hotel. The narrator notices a woman's dressing gown or robe on the bed.

The South American makes everyone martinis and pays a hotel maid to bring him a hammer, nails, and a chopping knife, which she does. He hammers two nails into a table and expertly secures the American's left hand between them with string. The narrator thinks, 'Anyone would think the son of a bitch had done this before.'

The narrator counts each successful light. He gets to 'Seven!' and notes that the lighter is obviously a good one, and describes how the thumb is key to working it. The suspense is heightened.

Just after 'Eight!' an older woman rushes in, seizes the South American, whom she addresses as Carlos, and shakes him violently while berating him in what sounds like Spanish.

She apologizes to the others and explains that Carlos is a 'menace' and that he 'has taken altogether forty-seven fingers from different people, and he has lost eleven cars.' She's brought him to Jamaica to help him avoid institutionalization. She reveals that the Cadillac and everything Carlos once owned are hers because she won them from him. The narrator sees that her hand 'had only one finger on it, and a thumb.'

'Man from the South' is part of a short story collection called Tales of the Unexpected, whose themes include risk-taking, cruelty, revenge, and (perhaps unsurprisingly) high-stakes betting. This narrative includes all of the above themes except for revenge, and it certainly features suspense and the unexpected. Most readers are expecting the American to either win or lose the bet, not be rescued from the risk.

A major theme in the narrative relates to assumptions. The narrator relies heavily on these, supposing that other characters are English, American, South American, or Spanish speakers. However, Dahl carefully presents these impressions as subjective. The American makes more dangerous assumptions, trusting that Carlos owns the Cadillac, will keep his word, and won't cause him more bodily harm than they've agreed upon. No one asks to see the car title or deed Carlos claims is in the car to see if his name is on it.

Another major theme involves motive and reasoning, which are largely and disturbingly absent in this story. We know the American is willing to risk his little finger for the Cadillac, but why would Carlos want his finger?

Why do the narrator and the English woman involve themselves in a wager that could end in gory mutilation? Why would the woman caring for Carlos sacrifice her own fingers multiple times, and why would she stay in a relationship with such a demented fiend? In leaving these questions unanswered, Dahl seems to be presenting the human mind as dangerous, irrational, amoral, and unpredictable.

Roald Dahl's 'Man from the South' is about an American man and a South American named Carlos who agree to a bet. If the American can get his cigarette lighter to light ten times in succession, he wins Carlos' Cadillac. If he loses, Carlos will chop off his little finger.

The narrator and an English woman watch as the lighter works eight times in a row. Then a woman rushes in and stops the bet, explaining that Carlos has already cut off forty-seven fingers and lost eleven cars. She's won everything he owns, including the Cadillac, but has clearly lost on some occasions, as she is missing three fingers herself.

We also learn that the collection in which this story was published is called Tales of the Unexpected and includes themes of risk-taking, cruelty, revenge, and high-stakes betting. There are at least two major themes in 'Man from the South:'

The story illustrates the unpredictability, irrationality, and lack of morality of the human mind.

Champion of the World by Maya Angelou: Summary & Analysis

Of Mice and Men by John Steinbeck | Summary & Analysis

The Willow Song in Othello

Why Did Roald Dahl Write Matilda?