Megan has tutored extensively and has a Master of Fine Arts Degree in Fiction.

In this lesson, we will learn about Roger Chillingworth, one of the main characters in Nathaniel Hawthorne's 'The Scarlet Letter.' After a brief overview of the plot, we will analyze his character and several important themes pertaining to his character's development in this timeless classic.
Create an account

Have you ever had a relationship where your significant other cheated on you? Hopefully not, but if you have, you will better understand the motivations of the character Roger Chillingworth in Nathaniel Hawthorne's The Scarlet Letter. Nathaniel Hawthorne's historical fiction novel was written in 1850, but it tells the story of a young puritan woman in 1640's Salem, Massachusetts, who commits adultery against her husband.

Hester Prynne, the heroine of The Scarlet Letter, commits adultery against her husband Roger Chillingworth, a wealthy English businessman, (only that isn't his real name). When he arrives in Salem, he finds out that his wife has had an affair with another man. In order to blend inconspicuously among the people of Salem, he changes his name and secretly attempts to locate and punish his wife's lover.

No one recognizes Chillingworth because he doesn't arrive in Salem until two years after his wife. He had remained behind in England to wrap up business, and then his ship wrecked during his journey to America. Many people assumed he didn't survive, but in puritan society, Hester's crime was still considered adultery even if her husband had died during the voyage.

Even though Hester is caught and punished, Chillingworth will not be satisfied until he completely destroys his wife's lover. He suspects the culprit is the Reverend Arthur Dimmesdale. As part of his plot for revenge, he moves in with him to tend to his failing health.

One night, Chillingworth checks on Dimmesdale and sees a red A on the minister's chest, proof that he is indeed Hester's lover. But just knowing this is not enough for Chillingworth. If anything, it heightens his need for revenge.

He devotes his life to destroying Dimmesdale. He torments him psychologically until the minister cannot take it anymore. When Dimmesdale finally confesses his sin and dies, Chillingworth's life purpose is suddenly gone. He too dies soon after. He leaves his fortune to Hester's illegitimate daughter, Pearl, even though the child is proof of her sin against him. 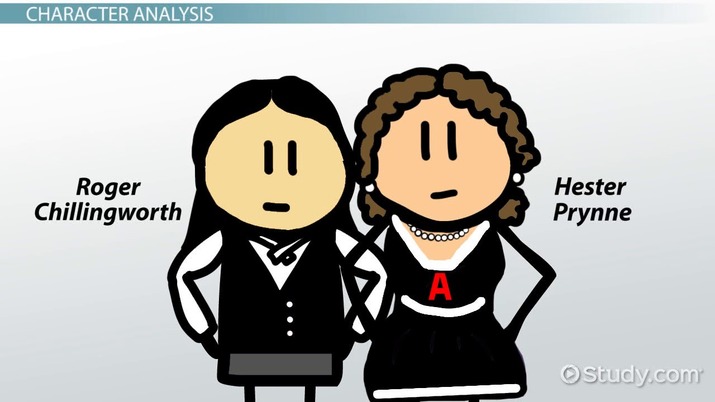 Coming up next: The Count of Monte Cristo: Summary & Characters

Despite being wronged by his wife, Chillingworth loves Hester so much that he cannot hurt her or her baby. Instead, he turns his anger on his wife's lover. While Hester accepts the consequences of her actions and dutifully lives in social isolation with her daughter, Pearl, the affair is much more psychologically devastating for Dimmesdale and Chillingworth. Both men are destroyed: Dimmesdale by guilt and Chillingworth by hate.

Chillingworth's obsession with revenge affects his appearance. Although he is fairly unattractive at the beginning of the novel, with lopsided shoulders and an aged demeanor, the hatred transforms him into a devilish figure. When Dimmesdale dies, the passion in Chillingworth is extinguished, leaving him shriveled up.

Without either love or revenge to live for, Chillingworth dies shortly after Dimmesdale. Before he dies, however, he rewrites his will, leaving his fortune to Hester's daughter, Pearl. This act signifies that he has managed to free himself from the all-consuming hate at the very end.

Chillingworth's primary motivation and driving force is revenge. When he arrives in Salem, he expects to find his young wife waiting for him, and starting a family with her would have been the focus of his life. Instead, he is left with nothing but the desire for revenge.

He approaches this revenge from a scientific perspective. Even the name he adopts, Chillingworth, implies an aloof iciness. He is removed from all emotion. Even though he has been wronged at a very personal level, he pursues revenge with an exactitude of a detached and calculated scientific experiment.

Many of the references to Chillingworth allude to hell or the devil. For example, when he arrives in Salem, he is said to have a 'red light' in his eyes and is described with fire imagery. In particular, his desire for revenge is associated with flame; his soul is portrayed as being 'on fire.' At one point, Hester's illegitimate daughter, Pearl, even calls Chillingworth 'the black man,' another name for the devil.

Unlike the other characters in the novel, Chillingworth is a man of science, not faith. He is not a puritan and values knowledge over faith. When his ship wrecked, he spent a year among the Native Americans. While living with them he studied their science, and especially herbs, which he used in his treatment of Dimmesdale.

By contrast, Dimmesdale is a minister. He doesn't just believe in God; he actively preaches the faith. He commits a major sin, of course, when he has an affair with Hester. The guilt about this secret sin ends up destroying him, although his guilt is fueled by Chillingworth's psychological torment.

Compared to the intense emotion Dimmesdale feels about the affair, Chillingworth, while hurt, is much more clinical. He recognizes that he is at least partly to blame. Even though he loves Hester, he recognizes that she is a beautiful woman, and he wrongfully neglected her in favor of his studies at the beginning of their marriage. At one point, he tells Hester, 'I might have beheld ... that scarlet letter blazing at the end of our path!'

The Scarlet Letter is a historical fiction novel by Nathaniel Hawthorne written in 1850. It is set in 1640's Salem, Massachusetts and tells the story of a young puritan woman, Hester Prynne, who commits adultery against her husband, Roger Chillingworth, a wealthy English businessman. He arrives in Salem two years after his wife and discovers that she has had an affair with another man, the Reverend Arthur Dimmesdale.

He crafts a plot for revenge against Dimmesdale, moving in with him under the pretense of tending to the minister's failing health. Chillingworth psychologically torments him until he confesses to the affair. But when Dimmesdale dies, Chillingworth no longer has a reason or purpose for living and dies as well. Both men are destroyed by the affair: Dimmesdale by guilt and Chillingworth by hate.

Chillingworth is consumed by his need for revenge; it even transforms his appearance. Many references to him allude to hell or the devil. He is said to have a 'red light' in his eyes. His soul is describes as being 'on fire.' Pearl calls him 'the black man,' another name for the devil.

Chillingworth is a man of science, however, and he carries out his plot with the detached calculation of a scientist. Ultimately, however, he redeems himself when he admits to the hand he played in the affair through his neglect of his young wife. Before he dies, he rewrites his will, leaving his fortune to Pearl, Hester's illegitimate daughter. This act shows that he is, at last, free of his hatred.

Diction in The Scarlet Letter