Della has been teaching secondary and adult education for over 20 years. She holds a BS in Sociology, MEd in Reading, and is ABD on the MComm in Storytelling.

Role playing is a practice in which people rehearse a behavior they will take in a situation before actually facing the situation. Learn the definition and benefits of role playing, such as developing emotional connections, providing a safe space to learn, and developing empathy. Updated: 01/04/2022
Create an account

'All the world's a stage, and all the men and women merely players; They have their exits and their entrances, and one man in his time plays many parts, his acts being seven ages.'

We all play roles in our lives and those roles may change over time, in different company, or under various circumstances. This Shakespearean idea describes interpersonal interaction as a series of role-playing exercises, conscious or not, based on the expectations placed on us by ourselves, others, or society. 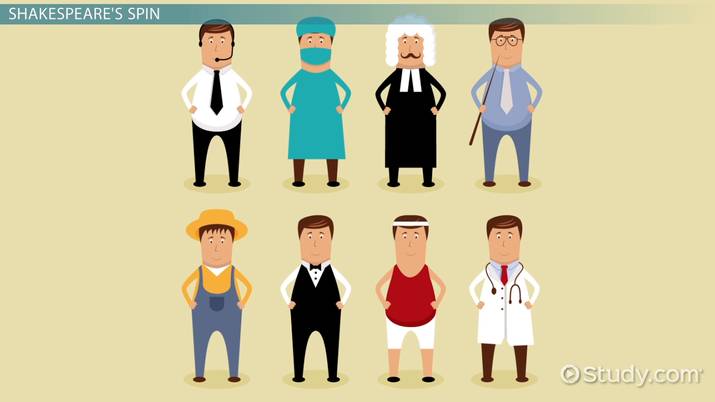 Try it now
Back
Coming up next: Strategies & Activities for Responding to Literature

What Is Role Playing?

Wesley wants to ask his sweetheart to marry him, so he has to talk to her father first. Nicole wants a raise after a great performance review, so she will need to talk to her boss. Shawn is worried about how he will approach awkward holiday conversations when his family has very different political views. Señora Lopez wants her Spanish class to practice their conversational skills in a variety of practical settings. Miss Hughes wants her literature students to understand the characters' perspectives in a story. Coach Henderson wants his team to work on their offense and get into the mind of the opposing team.

The people in each of these scenarios would benefit from a little practice with role playing. Role playing is a way of working through a situation, a scenario, or a problem by assuming roles and practicing what to say and do in a safe setting. This kind of learning experience has several benefits and advantages when it's implemented skillfully by a good trainer or teacher. Instructors can supplement their teaching methods with role playing in any context where it seems relevant. Even rehearsals of personal situations through role playing with a trusted friend can provide beneficial learning opportunities. Let's look at some of the benefits of adding role playing to other instructional methods

When teachers use role playing as instruction, students have the capability of developing deeper involvement and knowledge about the issues at hand. For example, Miss Hughes may find her students are able to relate to characters when they assume those characters' roles.

Assessment and Application of Learning

Another benefit is that teachers can observe realistic behavior in role playing that can be used to assess and diagnose where students are in their skill level and development of knowledge. For example, Señora Lopez notices which students are struggling to order from the menu in a restaurant role-play exercise and determines which vocabulary words to emphasize with instruction.

These observation assessments built into role playing instruction can also show how well students can apply their learning. This means Coach Henderson can see if his team is able to apply the plan in the playbook while on the field playing against their teammates, who are role playing as the opposing team during practice.

Provides a Safe Place to Practice and Learn

Role playing provides a safer environment to practice without real-world consequences. While some students may experience anxiety during role playing, it is better to work through those nerves in a simulated environment. For Nicole, this means that she can get the confidence to ask for a raise by first working out the kinks with her best friend, who plays the role of her boss.

Role playing in instruction allows for greater control of the practice sessions by dividing up the situation or lesson into steps that can be mastered in stages. This is not usually the case in the real-world setting, so there is a benefit to practicing those skills needing more attention or that have increasing complexity. For example, in Wesley's proposal scenario, he is able to practice the conversation leading up to popping the question, which is harder for him than professing his love.

Role playing has the benefit of involving emotional and cognitive processing, allowing the development of greater empathy for others. Empathy is the act of trying to compassionately understand the feelings and positions of others. This advantage can help Shawn learn to communicate with his family by practicing with someone and taking the role of one who has his family's opinions. By advocating for their positions, he can be more prepared for civil discourse and better understand their positions.

In this lesson, we discussed the use of role playing as a strategy for problem solving and instructional methodology. Role playing allows someone to assume the role of another person and practice their behavior, choices, and words to gain deeper understanding of someone else. Role playing can also be used to work through personal challenges that involve interacting with others. Teachers can use role playing to make their lessons come to life and resonate with students. Some of the benefits of role playing are that it creates a deeper understanding of the issues, it creates greater empathy for those with different views, it allows for breaking up learning into smaller steps, and it provides opportunities to assess knowledge mastery and application of learning within a safe space that has limited potential for real-world consequences.

How to Integrate Knowledge & Skills From Multiple Subjects in Physical Education

The Importance of Teacher Enthusiasm

How to Integrate Knowledge & Skills From Multiple Subjects in Physical Education

The Importance of Teacher Enthusiasm