Borrowing from Greek mythology, the early Romans developed their own system of religious beliefs, including worshiping the mythical founder of Rome, Romulus, multiple gods of war, and the Vestal Virgins. Learn how Rome evolved from worshiping the ancient deities and the influence of other cultures to become followers of Jesus Christ and Christianity. Updated: 10/23/2021
Create an account

When it came to be the quintessential ancient empire, the Romans had it all. They had a massive army, built really impressive structures, and had a language with such breadth and depth that it has only been in the last 100 years that some knowledge of it hasn't been mandatory for being considered 'educated.'

However, the Romans did not build all that themselves. Like many other deeds of the Romans, they simply took what was best from their neighbors, touched it up with some new details to make it more Roman, and then were not closed-minded when someone came up with something new. In fact, this is a pretty useful paradigm through which to examine the development of Roman myths and religion. In this lesson, we'll look at how Rome's religion was transformed throughout the centuries before becoming the classical myths we still read today. 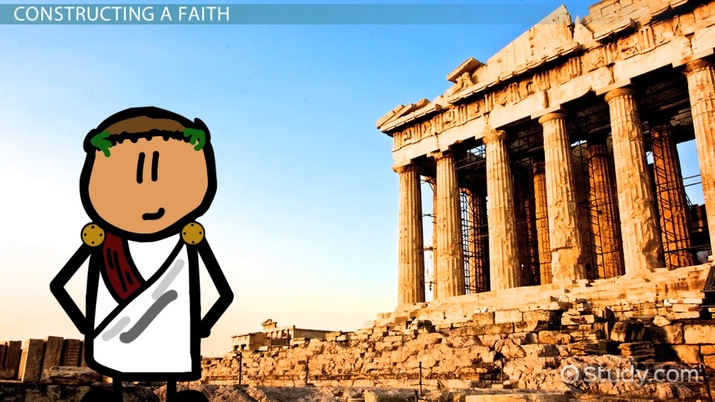 Coming up next: The Founding of Ancient Rome & Rome's Early History

Perhaps no other culture influenced the Romans as much as the Greeks. When you really think about it, this isn't a surprise. From the earliest days of Roman civilization, they always sought to take the most sophisticated ideas possible from their neighbors. In the beginning that meant the Etruscans, which we'll come back to in a minute. But for the formative years of Roman culture, that meant borrowing from the Greeks.

Luckily for the Romans, they didn't have to go that far. The Greeks had built a massive colonial presence in what is now southern Italy and Sicily, which they collectively referred to as Magna Graecia. This meant that there was plenty of first-rate Greek civilization occurring just a short journey away from Rome, and the Romans wanted in on it.

As a result, eventually the Romans had adopted a great deal of Greek religion. Of course, they updated it and put a Roman spin on it, all by changing the names of many of the gods, goddesses, and other figures. For example, Zeus - the Greek king of the gods - was now Jupiter, or even Jove, depending on what myth was being alluded to. Ares - the Greek god of war - was now Mars, but the Romans tended to view him in a more positive light. Heracles became Hercules. Some of the myths were even adopted with little more than a name change.

Of course, the Romans would not have thought of themselves as having worshiped Greek gods. Instead, they were Roman gods. To prove this, the Romans needed to look no further than one of their great national epics, The Aeneid. This work told the story of Aeneas, the ancestor of the mythical founder of Rome, Romulus. It turns out that Aeneas was himself Greek but was tasked with fate to found a civilization whose destiny was to rule the world. In this, the Romans acknowledged that the Greeks had been the first to worship that set of gods, but that it was sheer destiny for the Romans to worship them as well.

Other earlier influences became part of the Roman religious belief, especially from the Etruscans, a group that had lived where the Romans did and heavily influenced their culture. Notably, Rome had multiple gods of war. Of course there was Mars, who showed up in all the myths; but there was also Janus, a two-faced god who was believed to assist Roman armies on campaign. Also, there were the Vestal Virgins, who were loosely linked to the Greek Pantheon. The Vestal Virgins were a group of unmarried women who tended to the holy fire of Rome. In any event, the Romans took what was attractive about other mythologies and made it their own.

As Rome expanded, it encountered new religious traditions. Some of these became absorbed into the pantheon of Roman belief - for example, if a people had a female goddess of wisdom, then clearly this was Minerva presenting herself in a different way. Still, other religions presented themselves completely outside of the pantheon. For the Roman government, that was okay as long as proper respect was still paid the Roman way - after all, religion was more about identification with people and less about a personal journey to the Romans. For the people, that meant that as long as they at least acknowledged Roman beliefs, they were free to pursue other paths to spiritual fulfillment.

While numerous smaller groups became established during this period, such as the cult of the Egyptian goddess Isis or the Persian figure Mithras, one tradition in particular became especially common: Christianity. Ironically, Rome took a hard stance against Christianity early on, but later embraced it as its official religion. Today it is still the world's largest religion, and it all got its start back in the Roman Empire. Taking advantage of trade routes across the Mediterranean world, the faith grew from only a few hundred adherents to being recognized as a legitimate belief throughout the empire by 313.

The Romans managed to build one of the greatest empires in the ancient world, but were especially helped by their ability to construct a complex pantheon of deities. Of course, much of this was heavily influenced by the Greeks, whom the Romans had frequent early contact with from Magna Graecia, the Greek colonies in Southern Italy and Sicily. However, the Romans also were influenced by the Etruscans, a group that lived in central Italy before the Romans and introduced Janus, a two-faced god of war, as well as the Vestal Virgins, a group of women who guarded the holy fire of Rome. Additionally, Persians, Egyptians, and many other groups influenced Roman religions. Finally, however, it was Christianity that would spread to become one of the largest religious traditions in the Roman Empire.

Greek Parthenon Facts & Purpose | Who Made the Parthenon?