Rome is one of history's most powerful empires located in the Italian Peninsula. Learn about the early history, inhabitants of Italy, the Latin invaders, and the myth of Rome's founding. Updated: 10/23/2021
Create an account

Italy: An Unlikely Home to a Mighty Empire

Behold Italy. It may not look like much, but this graceful peninsula would come to be home to one of the largest, most enduring civilizations in human history: the Roman Empire. Given its glorious future, we might expect Italy to be a land overflowing with natural resources, but in fact, Italy offered few resources, just a bit of tin, copper, iron and gold. The only thing Italy had a lot of was fertile land and some very fine marble. Well then, perhaps Italy was a great mercantile center, given its central position and miles of shoreline. But no, the shores of Italy offered few natural harbors, making it surprisingly unsuited to a mercantile empire. Maybe Italy was sort of a natural fortress, surrounded by the sea on three sides and protected by the Alps to the north. But no, Italy's low-lying coastline made it easy to invade by sea (if you could evade the land-based defenses.)

So why, with few resources, few harbors, and vulnerable borders, did Italy become the seat of such a mighty empire? Well, Italy had plenty of fertile land, allowing it to support a large population. And since the people of Italy could not easily acquire other resources through mining or trade, the only option remaining was to take them by force. And since Italy offered so few boundaries to invasion, the people of Italy learned the valuable lesson of 'Conquer, or be conquered.' That must have been the sight that greeted the first Latin-speaking peoples as they made their way across the Alps between 2,000 and 1,000 BCE: a lush, fertile land just begging to be conquered. 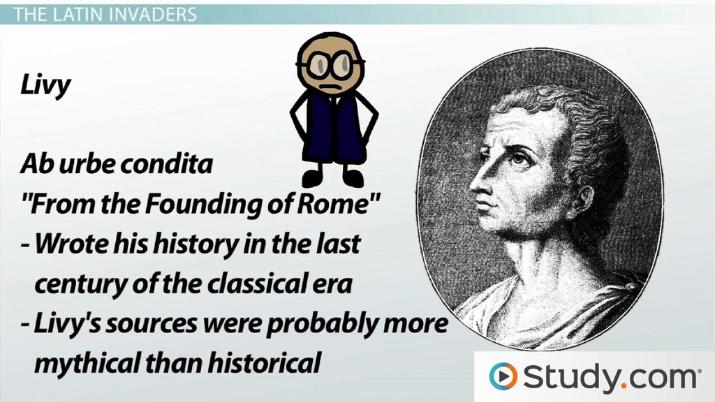 Coming up next: The Seven Kings of Rome: History & Summary

Yet these early Latin-speaking invaders, or Latins as they're called, were not the first people to set their sights on Italy. The Italian peninsula was already occupied by Etruscans in the north and Greeks in the south. We actually know very little about the Etruscans. We know that they didn't speak Latin or any of the other Indo-European languages that had spread from the Black Sea basin. This suggests that the Etruscans had been living in Italy since as early as 3-4,000 BCE. In the centuries that followed, the Etruscans made some neat architectural innovations, including the arch and the vault as well as some pretty art, including murals and sculptures. The most famous forms of Etruscan art are their funerary urns and sarcophagi.

As you may have deduced from these burial statues, women enjoyed an elevated status in Etruscan culture. Both the Greeks and Romans wondered at the freedom of Etruscan women, who engaged in public festivals and dined with their husbands. Unfortunately, the Romans borrowed the Etruscans' arches and art but not their views on women. While the Etruscans were spreading across northern and central Italy, the Greeks began colonizing southern Italy and Sicily around 800 BCE.

The mountains of Greece might have protected the Greeks from invasion, but they offered very little good land for farming. The fertile plains of Italy served as a breadbasket for growing Greek states, who raced to establish colonies and feed their expanding populations. These Greek colonies were just as civilized as their homeland and were centers of art, religion and even philosophy, being the home to such famous philosophers as Pythagoras and Archimedes. The Greeks provided the Romans with their alphabet, their religion and many elements of their art and architecture.

Thus, the stage is set for the founding of the Roman Empire. We've examined the setting - the fertile but vulnerable Italian peninsula - and we've met most of the cast of characters: the Etruscans in the north and the Greeks in the south. Now, let us look at these Latin invaders and their first steps into Italy. Our main source for the history of these early Latins is the Roman historian Livy, whose work 'Ab urbe condita,' From the Founding of Rome, served as a textbook of Roman history for centuries. We're not sure how much to trust Livy. He seems to be fairly rational and tends to look at myths with a great deal of skepticism; however, he's still obviously a big fan of Rome and seeks to paint the empire in the best light possible. Moreover, Livy wrote his history in the last century of the classical era, at least a thousand years after the first Latin-speaking people found their way to Italy. This means even Livy's sources were probably more mythical than historical. And as Livy himself puts it, 'To such legends as these ... I shall attach no great importance.'

Due to these difficulties, no one is quite sure where the Latin invaders came from. The Romans claimed that their Latin ancestors emigrated from Troy, a far-off city on the coast of Asia Minor and scene of the famous Greek epic The Iliad. Historians do not take this claim very seriously. The general assumption is that the Roman link to Troy was an attempt to co-opt some of the glory of Greek civilization. It is much more likely that the Latins weren't civilized people from Asia Minor but rather barbarians from somewhere in Northern Europe. Whatever their source, these people forced their way down into the Italian peninsula sometime between the first and second millennium BCE.

The Myth of Rome's Founding

The Latins established cities from the Alps all the way down to Central Italy, violently displacing the native Etruscans. According to Livy, these Latin cities banded together for mutual protection, forming the Latin League. At the head of this league was the city of Latium, also known as Alba Longa. Latium was ruled by a series of kings who engaged in all of the normal scheming and political maneuvering one might expect from rulers.

According to Roman myth, one of these rulers, a fellow named Amulius, stole his brother's throne. Fearing his brother's daughter, Rhea Silvia, might produce an heir to challenge him, Amulius forced Rhea to become a vestal virgin. Despite the enforced chastity of her new position, Rhea became pregnant. Some said that Mars, the god of war, did the deed, but even Livy doesn't give this claim much weight. Rhea was cast into prison, and her twin sons, Romulus and Remus, were cast into the river. They were rescued from the banks of the river by a she-wolf, who suckled the babies as if they were her own until they were found by a shepherd. The shepherd raised the babes into young men, and they eventually killed their treacherous uncle, who had so sorely abused their mother and themselves, restoring their grandfather to the throne of Latium. Inspired by their victory, the young men set out to found a city of their own. They found the perfect spot along the river Tiber and marked out its boundaries. All that remained was to give the city a name. Each of the brothers thought the city should be named after himself. Eventually the conflict came to blows, and Romulus slew his brother Remus, giving the city its new name: Rome. Livy gives the date of this founding as 753 BCE, a date that even modern historians seem to agree with.

Romulus then set about establishing his city. He built the walls of Rome, already planning for the city to be larger than any other in Italy. He established the religion of Rome, borrowing some customs from the Greeks, like the worship of Hercules, and some from the Etruscans, like the practice of augury, or predicting the future by the flight of birds. Romulus is also credited with the establishment of Roman law since, as Livy put it, 'Nothing else but law could unite them into a single body politic.' Finally, Romulus is supposed to have established the senatorial class, made up of the founding fathers of Rome. Roman senators centuries later would take pride in tracing their lineage back to these original few men.

To review, Italy seems a strange place to serve as the seat for a mighty empire. It had few natural resources, few natural harbors for trade and vulnerable boundaries. All Italy had to offer was fertile land. Yet these features did not dissuade the settlement of Italy by a variety of people. The Etruscans, who may be the native inhabitants of Italy, established a thriving civilization in northern and central Italy. They were quite advanced for their time and left the Romans a legacy of architectural achievement in the arch and the vault, as well as an impressive body of art. The Greeks needed the fertile land of Italy to feed their people and began colonizing southern Italy and Sicily around the eighth century BCE.

Meanwhile, the Latins, a group of Latin-speaking barbarians, invaded from the north, displacing the Etruscans and establishing their own cities in northern and central Italy. We're not sure exactly where these Latins came from, or even how long they had been in Italy, but we are fairly sure that a group of Latins established the city of Rome around 753 BCE. We're not sure how this founding took place either, but the Romans believed their city was founded by the twin brothers Romulus and Remus, sons of Mars, the god of war.

The Year of the Four Emperors & the Flavian Dynasty

Seven Kings of Rome History | Who was the Last King of Rome?

Emperors of the Julio-Claudian Dynasty

Sparta History & Facts | What was Sparta in Ancient Greece?

Greek Phalanx Warfare Formation & Tactics | What is a Phalanx?

Romulus and Remus Facts & History | The Founding of Rome