In 1980, former movie star and governor of California, Ronald Reagan won the presidency of the United States. His two terms represented a conservative shift in American politics.
Create an account

In 1980, a former peanut farmer from Georgia went up against a former movie star from California in one of the world's biggest popularity contests. Doesn't sound like a fair fight, does it? It was the 1980 presidential election in the United States. The incumbent was Democrat President Jimmy Carter; his challenger was the former governor of California, Republican Ronald Reagan.

At the time, America faced a deep recession at home and a number of issues overseas, especially the Iran hostage crisis. Reagan persistently asked the American people, 'Are you better off now than you were four years ago?' The answer was a resounding, 'No!' as Reagan was elected in a landslide, claiming 489 electoral votes to Carter's 49. Reagan's election in 1980 with a very diverse base of support represented a conservative shift in American politics often referred to as the New Right. 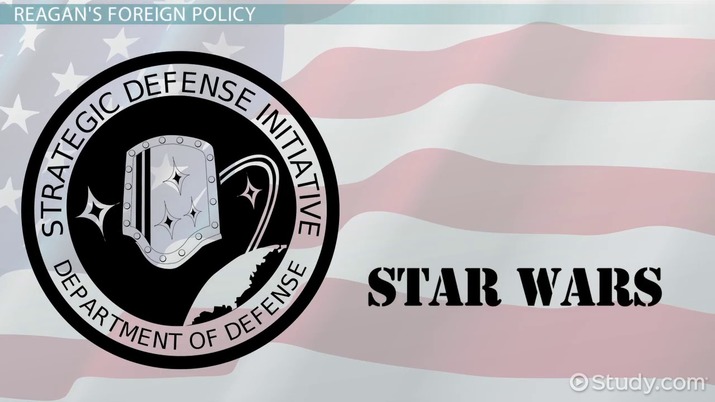 Coming up next: The Policies & Presidency of George H.W. Bush

On the home front, Reagan promoted a return to traditional and religious values. Yet while supporting conservative ideals, he championed equal rights. He filed more federal civil rights cases than any previous administration and nominated the first female Supreme Court justice: Sandra Day O'Connor. Reagan was also the first to implement a plan to fight HIV and AIDS.

But his most pressing domestic policy issue was the economy, and his aggressive policies earned a nickname: Reaganomics. President Reagan summed up his philosophy during his first inaugural address when he said, 'Only by reducing the growth of government can we increase the growth of the economy.'

The theory of 'supply-side economics' suggests that a laissez-faire, or 'hands off,' government will encourage businesses to grow, invest more, create jobs for more tax-payers, and stimulate the economy. Ideally, the benefits of stronger businesses 'trickle down' to the workers. In support of this goal, Reagan increased tariffs, weakened unions, and pursued moderate deregulation. Perhaps most importantly, though, corporate income tax rates fell from 48% to 34%. Reagan also supported deep personal income tax cuts to encourage spending.

Despite his stated desire to see the federal government shrink, basic low-income assistance programs actually grew by 40% during his time in office and the military budget increased by 35%. The combined effect of Reaganomics was a tripled national debt. But beginning in 1982, the U.S. economy did begin its longest peacetime expansion ever, lasting 92 months.

When it came to foreign policy, Reagan proposed a complete reversal of U.S.-Soviet relations. Following the Vietnam War, earlier presidents had willingly decreased tensions with the U.S.S.R. in a period of détente. But during that time, the Soviets had been expanding their sphere of influence. President Reagan wanted to increase Cold War competition against the so-called 'evil empire' and overturn communist governments.

In pursuit of this goal, Reagan approved a 35% increase in the defense budget. The U.S. increased troop numbers, modernized its weapons, enlarged the Navy, developed the intelligence program, and researched a strategic defense system to protect the United States from long-range Soviet missiles (dubbed 'Star Wars'). The Soviets, as planned, just couldn't keep up.

President Reagan wanted to use this newly-improved fighting force to end the Cold War once and for all. During his time in office, the United States helped anti-communist factions prevail in Asia, Africa, Europe, and Latin America, most notably in Poland and Grenada. Reagan also intervened in the Middle East against regimes that had aligned with the Soviets, but success was elusive in such places as Lebanon and Libya.

Reagan battled communism on the economic and diplomatic fronts, as well: for example, opening markets in formerly closed, Soviet-style Caribbean nations. He also made friends of the new Soviet leader, Mikhail Gorbachev, and encouraged reforms in that nation through nuclear weapons agreements. One of Reagan's most memorable speeches was in 1987, when he stood in front of the Berlin Wall separating communism from freedom and demanded, 'Mr. Gorbachev, tear down this wall!' The Berlin Wall did, in fact, fall shortly after he left office, but historians dispute President Reagan's role in the collapse of the Soviet Union.

But the Cold War was not Reagan's only foreign policy concern. On the day of his first inauguration, 52 hostages held by Iran were released, often seen as a triumph by the administration's supporters. Reagan also faced issues with China over Taiwan, with Britain over the Falklands, haggled over trade with Japan, faced off with several nations over drug trafficking, and much more.

One of President Reagan's Cold War battles turned into scandal. Beginning in 1984, the U.S. supported anti-communist rebels in Nicaragua known as the Contras. He hoped they would overthrow the anti-American Sandinista regime. But Congress banned such assistance, and in order to continue funding the Contras in secret, the administration took advantage of another war - this time in the Middle East.

Iran asked the U.S. to sell them weapons to continue a war against Iraq. Despite an arms embargo against Iran, the U.S. secretly agreed for two reasons. For one, America needed Iran's help in negotiating the release of seven American hostages being held in Lebanon. For another, the money from the arms sales could be used to fund the Contras.

The secret plan came to light in 1986. Reagan denied any knowledge of the scheme and an investigation cleared him of wrongdoing. But the Iran-Contra Affair damaged President Reagan's reputation and credibility for a time.

In 1980, former movie star and governor of California Ronald Reagan won the presidency of the United States. His landslide victory signaled a conservative shift in American politics. The Reagan administration is often remembered for three things:

1. Reaganomics slashed income taxes and supported business growth. This resulted in 92 straight months of economic growth, but also tripled the national debt.
2. He advocated for a strong position against the Soviet Union with a goal to ending the Cold War. A dramatic increase in the military budget helped wage war in places around the globe.
3. The Iran-Contra Affair damaged his reputation and credibility in some people's eyes, despite his acquittal.

After you are finished, you should be able to:

The Great Depression: The Wall Street Crash of 1929 and Other Causes