Shannon teaches Microbiology and has a Master's and a PhD in Biomedical Science. She also researches cancer and neurodegenerative diseases.

Ribosomal RNA (rRNA) is responsible for translation, or protein synthesis, in the cell. Explore what rRNA is, how it is synthesized, and its function, sequence, and importance in a cell. Updated: 09/09/2021
Create an account

To begin, ribonucleic acids (RNA) are a group of large molecules that have many different roles. They are especially important in the coding, decoding, regulation, and expression of our genes. As the name implies, ribosomal RNA (rRNA) is part of the ribosome. A ribosome is the protein builder of the cell. The rest of a ribosome is made up of proteins. In addition, there are two rRNA in each ribosome, one in the large subunit and one in the small subunit. 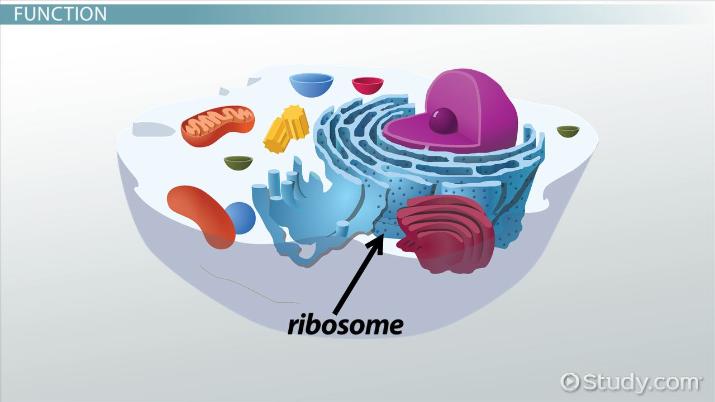 Try it now
Back
Coming up next: Transposons: Definition & Types

Translation is the name of the process our cells use to make proteins. Ribosomes are the organelles that can take a copy of our genetic material and translate it into a protein. The original genetic material is DNA, and it is stored in the cell's nucleus. When a specific protein is needed, our cells make a copy of the DNA. This copy is also RNA, but it is called messenger RNA, or mRNA. Thus, ribosomes translate mRNA into protein.

All RNA molecules are created by transcription, or making a copy of DNA. The protein that makes a copy of DNA is RNA polymerase. This protein is an enzyme that can read DNA and make an RNA copy. Transcription starts when the RNA polymerase enzyme binds DNA at a specific location called a promoter. Promoters are found 'upstream' of a gene. RNA polymerase reads the DNA in only one direction and continues reading and creating RNA until it reaches the end of the gene. The end of the gene has a special region called a stop codon. This region literally signals the RNA polymerase enzyme to stop copying the DNA.

Ribosomal RNA characteristics are important in medicine. Both prokaryotes (single-celled organisms, like bacteria) and eukaryotes (organisms whose cells have a nucleus and organelles, like the cells in our bodies) have ribosomes with rRNA. Prokaryotes and eukaryotes differ in the size and sequence of the rRNA in each subunit. Modern medicine exploits this difference using antibiotics. Therefore, rRNA is the target of several antibiotics, including chloramphenicol, erythromycin, and streptomycin.

Ribosomal RNA characteristics are also important in science. We can use rRNA to decide how closely related two species may be. This is because all cells have rRNA and, more importantly, rRNA sequence is specific for each species. How do scientists do this? They find out the rRNA sequence from one organism and compare it to the same type of rRNA sequence of another organism. They are looking for sequence homology, or how alike the sequences are. The more sequence homology between the rRNA, the more related the two organisms.

Let's review! Ribonucleic acids (RNA) are a group of large molecules that have many different roles, like coding, decoding, regulation, and expression of our genes. RNA is created by transcription, or making a copy of DNA. RNA polymerase is the protein that makes the copy of DNA.

rRNA is important to modern medicine, especially in the area of antibiotics. Additionally, science uses rRNA to discover how closely organisms are linked together through studying the rRNA sequence.

Once you've finished with this lesson on rRNA, you should have the ability to: