Courts use specific laws or policies to settle disputes over contracts known as Rules of Construction. Explore contract disputes through their principle purpose and construction while learning the implications of the court's interpretation and the parties' intent. Updated: 09/17/2021
Create an account

For example, let's say that you and I agree that I'll sell you my car. I say that I'll sell you my car for $100, and you accept. I deliver my 1984 Honda to you. You're angry, because you don't want this car. You thought I was selling my new, 2013 Cadillac. When you sue me for breach of contract, the court will follow certain guidelines, or rules of construction, in an attempt to determine what each of us intended. 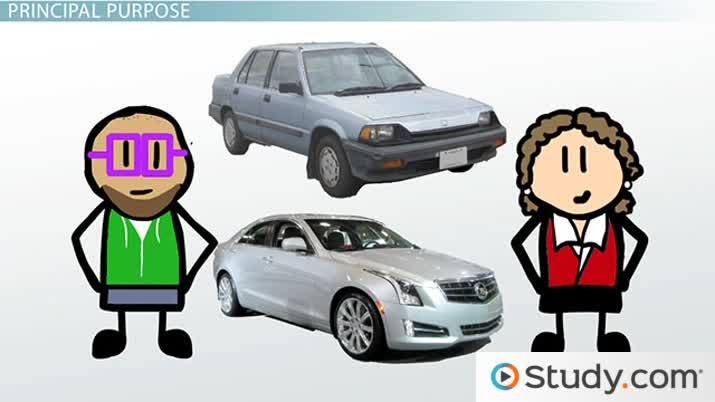 Coming up next: Implied Terms in a Contract: Definition & Explanation

Let's take a look at the contract we made to sell my car. My principal purpose is to unload my old car, and hopefully make a little bit of money on it. Your principal purpose was to acquire reliable transportation for as little money as possible. The court will look at our contract to determine if our purposes were met. If not, then the court will determine what needs to be accomplished so that we can each meet our purpose. In our agreement, for the most part, our purposes are met even if you end up with the Honda.

Sometimes a contract is constructed of several different writings. When this is the case, the court will examine and interpret those writings together. The court will consider each part in relation to the rest of the contract. This is done so that the court can determine the effect of each part on the other parts.

Let's say that I wrote a letter to you, stating that I'll sell my car to you for $100. I then sent you a copy of the title to my car. The title clearly states that the car is a 1984 Honda. These two documents will be read together to show that I intended to sell you the Honda. This contract will be interpreted to show that we had a valid agreement regarding the Honda.

The court will interpret the language of the contract and assign meaning to the various terms. Generally, contract language is interpreted according to the most common and prevailing meaning. Courts sometimes call this the plain, ordinary, and generally accepted meaning.

According to the Texas case of Birnbaum v. Swepi, courts should use the plain meaning unless the contract shows that the parties used the term in a technical or different sense. This is the law in most states, because many contracts use technical terms, or terms of art. When a contract is specific to a specialized area, any technical terms will be interpreted according to that specialization.

The court will also need to determine the parties' intent. The court will look at any demonstrations of a party's intent and interpret those actions in accordance to the terms of the contract.

For example, let's say that I offer to sell you my car for $100. I'm only joking and didn't intend to make a real offer. You say that you accept, mail me $100, and then sue me for breach of contract when I refuse to turn the car over to you. How will the court interpret my intent? If you reasonably believed that I intended to make a valid offer, then you will win. In this scenario, $100 isn't usually a reasonable amount of money in which to purchase a car. A reasonable person probably wouldn't believe that I intended to make a valid offer.

For example, let's say that I sell copy machines in my store. I tell you that I'll sell you a certain copy machine for $100. When you try to enforce this agreement, I say I was only joking. The court will presume that I meant to make a valid offer. You won't have to prove that you reasonably believed that I was making a valid offer. This is the type of offer that a court might uphold.

If the court finds an ambiguity, the court will interpret that term against the party that drafted the contract. The court will then determine the parties' intent by using the objective theory. This means that a party's intent isn't judged by what the party thought. Instead, it is judged by what another reasonable person would think. For business contracts, a court will presume that the parties' intended their agreement to be legally enforceable.

Upon finishing this lesson, you should be ready to:

Rules of Construction and Interpretation in Law
Related Study Materials

Non-Recoverable Damages: Damages Due to Breach of Contract

What is Intellectual Property? - Definition & Laws

What is a Statute? | Statute vs. Law

What is Intellectual Property Law? - Definition and Rights