Matthew teaches university-level History and is currently finishing a PhD at Lehigh University.

Samuel Slater was an industrial spy, a capitalist, and an innovator. The cotton textile factories he built in New England helped create the modern American economy. In this lesson, learn more about this man and his legacy.
Create an account

Who cares about cotton textiles? Well, Samuel Slater did! Samuel Slater was born in Derbyshire, England. He showed an interest in tinkering with mechanical devices early in his life. Unlike his father who was a farmer, Slater was keen to learn how the spinning wheels of a local textile maker worked. At the young age of 14, Slater became an apprentice in Jedediah Strutt's cotton mill. Strutt had been partners with one of the most important textile machine inventors in the world, Richard Arkwright.

Slater gained incredible knowledge about textile production methods. When he moved to the United States at age 21, he understood how to make a series of machines that produced cotton yarn. Over time, he mechanized the entire textile manufacturing process. This process was complex and required many steps. Slater was useful to American manufacturing because he adapted these many steps into a system that fit the unique labor and geographic conditions of the United States.

Shortly after his arrival, he learned that a wealthy factory owner in Rhode Island wanted help improving his cotton textile machinery. Having mastered the details of the most sophisticated English machines, he contacted this man, Moses Brown, and offered his services. With Brown's money and Slater's knowledge, the partnership showed promise almost immediately.

By 1790, Slater had built a version of an Arkwright-style mill in Pawtucket, Rhode Island. Put simply, this type of mill used machines powered by water to make cotton products faster and with less human labor. His factories were profitable, which allowed him to expand his business. Three years later, Slater began building mills in New Hampshire, Connecticut, and other parts of Rhode Island. In 1798, Slater and his brother formed their own enterprise, Slater & Company. He died a millionaire in 1835. 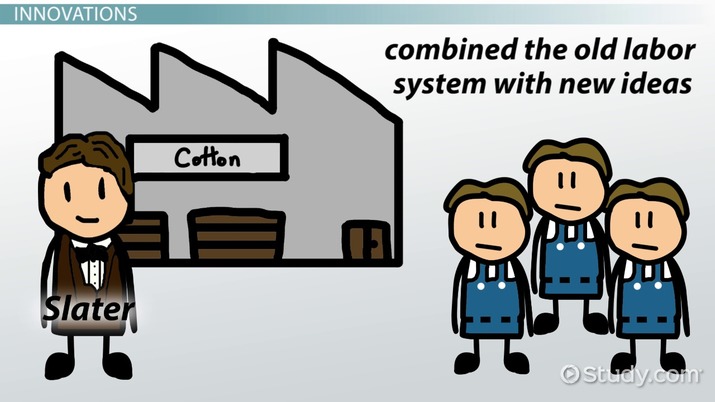 Slater is an important figure more for his innovations than his inventions. In fact, he borrowed the technological inventions of Arkwright and transplanted them to North America. He took big risks in doing this, however. It was illegal to take blueprints or machines out of England. If Slater had been caught, he might have been arrested and killed by the English government.

The myth surrounding Slater is that he memorized incredibly complex blueprints for textile machines and helped recreate the English cotton industry in the United States. He likely had actual copies of these water frame blueprints. These machines used water power from streams to mechanize textile production, which made it more efficient. With machinery in place, small factories like those Slater built in Rhode Island contributed to the United States becoming a major player in the world economy. Using machines to produce goods more quickly and cheaply was a key factor in the American Industrial Revolution.

What was still not in place were the workers he needed to run these factories. Many traditional cotton workers did not want to work for a boss. They had been independent and thought the rigid schedules of factory life were cruel and unfair.

This brings us to Slater's biggest innovation. He combined the old labor system with new ideas. The old system divided each of the many steps to make cotton thread and finished cloth into stages that different workers completed. This system was called the putting-out system. The name hints at the process: each worker would finish a step in the textile production process and then literally put their work outside for another person to take. The next worker would then complete another task, and so on, until a finished product was made.

What is now called the Slater system still relied on this putting-out process but combined some of the steps in small factories. Over time, as workers slowly became accustomed to factory work, more of the steps were integrated into the mills.

Another one of Slater's contributions was the use of child labor in relatively safe working environments. Compared to harsh farm conditions for children, Slater could convince parents that this was a superior alternative for their children. Importantly, the labor conditions in Slater's mills were very different than the larger ones that emerged in Lowell, Massachusetts during the same time period. Understandably, people who had never worked in a factory before struggled to adjust to this new environment. In this way, Slater's mills were an important intermediate step. His methods of factory organization preserved many aspects of the pre-industrial lifestyle and helped workers deal with the difficult transition to factory life.

Beginning with the first step of making cotton yarn with water-powered machines, Slater then brought more of the steps (like weaving cotton cloth) into his factories. Towards the end of his life, Slater introduced steam-power machinery, which made the whole process much more efficient and cheaper. He also could build mills in many places because they no longer had to be near streams or rivers.

By the early 1830s, the job market in the United States changed. New waves of European immigrants led to increased competition for employment. Faced with these conditions, skilled workers and farmers confronted pressures to accept the factory regime or lose the opportunity to work entirely. Due to these changing conditions, the Slater system became obsolete. This does not make Slater's contributions any less important, however. He still was a pivotal figure in American history, and his story shows how immigrants shaped the country's history.

When Slater moved to the United States in 1789, the new nation's wealth relied mostly on farm products, and Slater helped turn one of those products, cotton, into a finished material that made America a dominant force in the world economy. Slater was not the only person building textile factories, but his contributions were crucial for the modernization of the young American nation.

Samuel Slater was born in Derbyshire, England and played an important role in mechanizing the entire textile manufacturing process. He built factories around the US that contributed to the United States becoming a major player in the world economy. In addition, he combined the old labor system with new ideas to create the Slater system. His methods of factory organization preserved many aspects of the pre-industrial lifestyle and helped workers deal with the difficult transition to factory life. Slater was a pivotal figure in American history, and he helped make America a dominant force in the world economy.

James Madison After the War of 1812: The Era of Good Feelings

The Transportation Revolution: Turnpikes to Steamboats to Railroads

The Lincoln-Douglas Debates of 1858: Summary & Significance

Henry Clay and the Missouri Compromise of 1820

The Mayflower and the Plymouth Rock Settlement

Life in the South: Ordered Society and Economy of the Southern States