Holly has taught at the college level and holds a law degree and a master's degree in history.

In ''The Old Man and the Sea,'' author Ernest Hemingway considers youth and old age through the dreams of the main character, Santiago, who dreams of lions. Updated: 01/11/2021
Create an account

The Old Man and the Sea

Do you have any recurring dreams? Dreams where you are flying or falling, perhaps? In Ernest Hemingway's The Old Man and the Sea, Santiago, a Cuban fisherman, dreams of lions he saw on the coast of Africa as a boy. The narrator describes Santiago's recurring dream:

''He was asleep in a short time and he dreamed of Africa when he was a boy and the long golden beaches and the white beaches, so white they hurt your eyes, and the high capes and the great brown mountains. He lived along that coast now every night and in his dreams he heard the surf roar and saw the native boats come riding through it. He smelled the tar and oakum of the deck as he slept and he smelled the smell of Africa that the land breeze usually brought at morning.'' 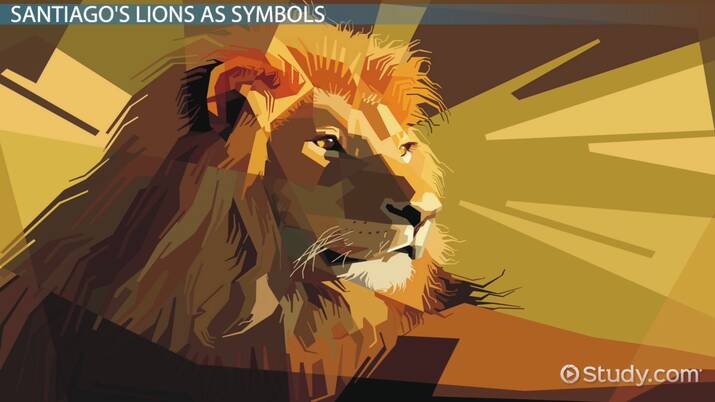 Coming up next: Religious Symbolism in The Old Man and the Sea

The setting for the story is simple: an old fisherman, Santiago, prepares for and then experiences a three-day fishing trip. The first night, before he sets out on his trip, Santiago dreams of Africa. The narrator notes:

On his second day at sea, Santiago stays awake, dragging the huge marlin hooked on his fishing line. He is tired; he wishes he could sleep and dream of the lions. He says to himself, ''Why are the lions the main thing that is left?''

On the second night at sea, Santiago sleeps. Initially he dreams of porpoises during mating season, leaping into the air. Then he dreams that he is in his bed in the village and is very cold. Then, ''he began to dream of the long yellow beach and he saw the first of the lions come down onto it in the early dark and then the other lions came and he rested his chin on the wood of the bows where the ship lay anchored with the evening off-shore breeze and he waited to see if there would be more lions and he was happy.''

The novella ends with Santiago in bed, resting after his three-day ordeal with the marlin. The last sentence reads:''The old man was dreaming about the lions.''

So what are we to make of Santiago's dreams of lions?

Throughout The Old Man and the Sea, Hemingway compares and contrasts youth to old age. Sometimes he uses symbols to describe aging, and other times Hemingway directly comments on old age.

For example, ''I wish I had the boy,'' Santiago utters when the tasks required of fishing are too hard on his body. While Santiago is literally wishing that the boy Manolin were in the boat to assist him, on a symbolic level, Santiago is wishing he still had more of a boy in him, meaning he wishes he were young again to more easily handle physical tasks.

Lions are symbolic of youth, strength, and virility. Lions are the top of the food chain, the ultimate predator. When Santiago dreams of lions, he is remembering his youth: the time in his life when he was strong, virile, and capable.

Santiago's dreams of lions also reveal his feelings about old age. He looks back with recognition of the boy he once was: the boy who revered and respected the lions at play on the beach. Santiago remembers the days when he was like a strong lion, and he contrasts the ''lion-boy'' to the man he is now. His body has aged, and he is weaker physically, but he maintains mental strength.

Finally, Santiago is described as happy when dreaming of the lions of his youth. In literature, sleep is often a metaphor for death. For Santiago, paradise is a day on a boat anchored off the African shore, watching the lions play.

Lions also figure prominently in both the life and other works of Ernest Hemingway. Hemingway was an avid outdoorsman, fisherman, and hunter. Many of his short stories are set in the wilderness. In one particular story, ''The Short Happy Life of Francis Macomber,'' a group of Westerners take a hunting safari in Africa. The story focuses on the title character's actions and attitude toward killing a lion. Many of Hemingway's works use the conflict of man versus nature as allegory (symbolic representation) for the conflicts of man within himself. In other words, the story tells of man interacting with nature, but the meaning of the story is to describe a man at conflict with himself.

Santiago, the old fisherman in Ernest Hemingway's The Old Man and the Sea, ponders youth and old age during his three-day fishing journey. Santiago dreams of lions, which symbolize youth, strength, and virility. Santiago is happy when he dreams of his youth, even in the midst of feeling his advanced age through a weakened body.

The Great Joe DiMaggio & Baseball in The Old Man and the Sea: Symbolism & Use

Santiago as a Tragic Hero in The Old Man and the Sea: Fatal Flaw & Examples

Themes of Struggle & Suffering in The Old Man and the Sea

Symbolism of the Marlin in The Old Man and the Sea

Setting of The Old Man and the Sea: Description & Importance

Narrative Point of View in The Old Man and the Sea

Theme of Friendship in The Old Man and the Sea

Man vs Nature in The Old Man and the Sea: Examples, Symbols & Power

Why is The Old Man and the Sea a Classic? - Literary Significance

The Old Man and the Sea by Ernest Hemingway | Summary, Symbolism & Analysis

Ernest Hemingway's Writing Style in The Old Man and the Sea

The Relationship Between Speaking & Reading