Culture refers to the values, norms, and beliefs of a society. Our culture can be thought of as a lens through which we experience the world and develop shared meaning. It follows that the language that we use is created in response to cultural needs. In other words, there is an obvious relationship between the way in which we talk and how we perceive the world. One important question that many intellectuals have asked is how the language that our society uses influences its culture.

Anthropologist and linguist Edward Sapir and his student Benjamin Whorf were interested in answering this question. Together, they created the Sapir-Whorf hypothesis, which states that how we look at the world is largely determined by our thought processes, and our language limits our thought processes. It follows that our language shapes our reality. In other words, the language that we use shapes the way we think and how we see the world. Since the Sapir-Whorf hypothesis theorizes that our language use shapes our perspective of the world, it follows that people who speak different languages have different world views. 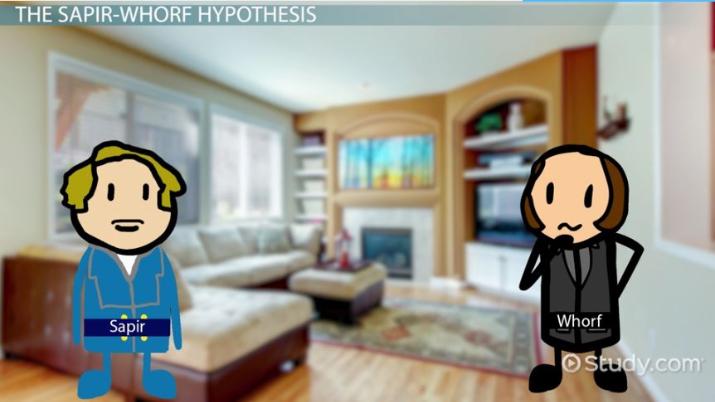 Let's use the Sapir-Whorf hypothesis to look at a real-life example in the workforce.

John and Mary are two best friends who work at the same hospital. Though John initially wanted to be a doctor, he later changed his mind and decided to be a nurse like Mary. John was often teased about his career choice. He was told that a man should be a doctor, not a nurse by several acquaintances. Though John's friends and relatives never teased him about his job, John noticed that whenever they explained his occupation to others, they referred to him as a 'male nurse.' However, whenever he heard others speak about Mary's occupation, they called her a 'nurse.'

John wondered why he and Mary's positions were referred to by two different titles when they both performed the exact same job. He also wondered if the language that others were using to refer to his occupation was at all related to our culture's sexist view that men cannot be nurses.

By referring to John as a 'male nurse' and his friend Mary as just a 'nurse,' their acquaintances were using language shaped by societal views that being a nurse is a woman's profession, and men should not be nurses.

The sexist language that our society uses also influences how we think about women. For instance, when we use words such as 'fireman' or 'policeman,' we are shaping society's view that women should not hold these professions. The racist and sexist language that many people in our society use in reference to individuals in other gender-based or racial groups tends to negatively affect how we view the members of these groups.

One classically cited example that supports the Sapir-Whorf hypothesis can be found in how Americans use the word 'snow.' In America, we have relatively few words for 'snow,' as compared to the Inuit people, who have numerous terms for the same word. As a result, they are able to think more intelligently about snow than Americans. While the validity of this theory is contested, some linguists still agree that the Inuit vocabulary for snow-related terms is impressive.

Another classic example occurred when John Lucy, a linguist and psychologist, and Richard Shweder, a cultural anthropologist, conducted a color memory test that showed that the perception of colors is influenced by the number of terms a language has for discriminating between colors.

The Sapir-Whorf hypothesis was developed by Benjamin Whorf and Edward Sapir. According to this hypothesis, our language influences and shapes our cultural reality by limiting our thought processes. The term culture refers to the beliefs, norms, and values exhibited by a society. An example of the Sapir-Whorf hypothesis is how sexist language influences the way in which our society views men and women. For instance, we use words like 'fireman,' 'policeman,' and 'male nurse.'

After you've finished, you should be able to:

Bilingual Overview & Examples | What is Bilingualism?