There are many satellites floating around in space. This lesson will teach you what a satellite is, some examples of natural satellites, the kinds of jobs man-made satellites do, and some other cool facts about these orbiting objects. Updated: 01/07/2020
Create an account

What Is a Satellite?

Imagine laying out in the grass on a summer night and looking up into the big, dark sky. You see some twinkling stars, but what really catches your eye is the bright, full moon. It's so bright that it seems to light up your backyard like a night light. And while you're looking at that bright white ball in the sky, you might not have thought about the fact that it revolves around the earth and is a satellite!

A satellite is anything that orbits, or revolves around a bigger object. When you think about satellites, you might think of a science fiction movie where scientists are launching a top secret, man-made satellite into space, but there are natural satellites, too! 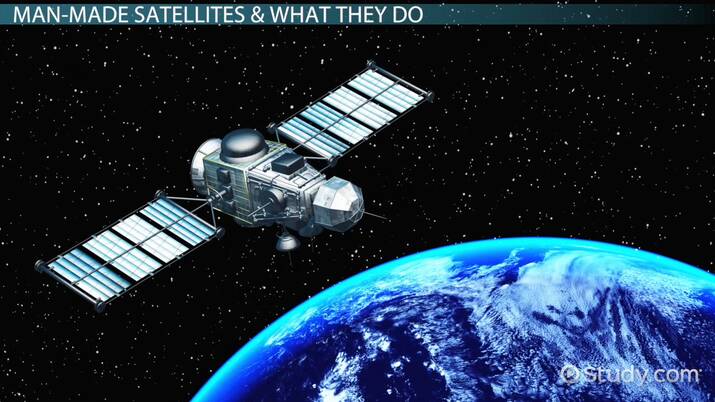 Coming up next: Edwin Hubble Facts: Lesson for Kids

The moon is an example of a satellite that you probably see on most nights. It orbits around the earth, like a hula-hoop spins around your waist.

And you might not even realize you live on a satellite. The earth orbits the sun, which means your home, toys, computer, and favorite sneakers are all sitting on a satellite!

But moons and planets aren't the only natural satellites. Asteroids and comets are satellites, too. Halley's Comet is a satellite of the sun, even though it can take as many as 76 years for one orbit.

Man-Made Satellites & What They Do

Some of the satellites we rely on today include:

What Does a Satellite Carry?

Man-made satellites all usually have an antennae and source of power because they have to make their own power in order to stay in their orbit. Since the sun puts out so much energy, satellites use that solar energy to make the power they need.

Sometimes satellites also have cameras, scientific sensors that take measurements, telescopes, or computers on board. Even the International Space Station is a satellite where astronauts live and conduct experiments as they orbit the Earth!

Satellites are anything that orbit around bigger objects and can be natural, like moons orbiting around planets and planets orbiting around the sun, or man-made. The first man-made satellite was called Sputnik 1 and was launched by the Soviet Union. Today, we use satellites for things like predicting weather, transmitting communications signals, and for GPS to find your location on the Earth.

Satellite Formation in Our Solar System

Types of Stars: Lesson for Kids