The fat found in foods comes in many forms, and has both positive and negative effects when eaten. Learn about the human body's dietary needs, and explore saturated, unsaturated, monounsaturated, and polyunsaturated fats. Review good vs. bad fats, lipids, triglycerides, trans-fatty acids, omega fatty acids, and sources and amounts of fat to understand the impact of fat on health. Updated: 10/02/2021
Create an account

Fat is often demonized for leading to many conditions that are detrimental to our health, ranging from obesity to cancer to heart disease to arthritis. This is no doubt true when the wrong kind of fat or too much fat, in general, is consumed. But the right kind of fat is important in our diet for many different things, and this lesson will point out which things those are, which fat is bad, and which is good. 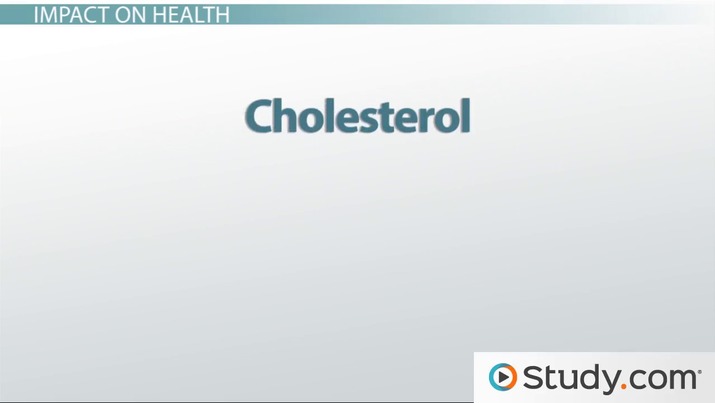 Coming up next: Vitamins We Need: Their Importance & Sources

Fats, more technically called lipids, come in a wide variety of shapes and flavors. Most of the different fats that we eat are called triglycerides, which are compounds that contain an alcohol called glycerol and three fatty acids. By the definition, you should see where the term 'tri'-'glycer'ides came from as there are three ('tri') fatty acids attached to a 'glycer'ol.

But that's enough of the overtly complicated stuff. Let's talk about the more commonly used terms when we describe the different kinds of fat.

Ok, knowing all of this, think about the time you left some animal fat out in a pan you were frying bacon in. Can you recall what happened when the plate cooled down to room temperature? The fat solidified into this white thing. But if you were to go right now to your pantry and find some vegetable oil you'll see that it's still liquid at room temperature.

Which fat do you think is the unsaturated fat? It's the vegetable oil. That's because the kinks and twists in unsaturated fat prevent those fat molecules from neatly sticking to one another into a neat, orderly, and therefore solid structure.

When unsaturated fats have hydrogen added to them, through a process called hydrogenation, a trans-fatty acid, aka trans-fat, is formed. Namely, the oil that is hydrogenated is vegetable oil, and hydrogenation makes the resulting fat less likely to spoil but more solid in composition than it was before.

Fat, in general, plays important roles in our body. Fat helps insulate the body, cushions internal organs, and helps us absorb important vitamins such as vitamins A, D, E, K. But not all fats are equal, and many, especially when ingested in high quantities, may result in weight gain or even more serious health problems. Other than obesity, too much intake of fat can result in things such as arthritis by way of damaging your joints as a result of having to carry around excess weight.

Eating solid fats, that is to say saturated and trans-fats, increases the amount of this bad cholesterol. This causes the formation of things called plaques in the arteries of the body, resulting in a condition called atherosclerosis. Atherosclerosis causes the arteries, critically in the heart, to narrow and harden. This can lead to a heart attack and death.

On the flip side, unsaturated fats help to lower the bad kind of cholesterol, which is good!

Sources and Amounts of Fat

Based on that, you already have a pretty good idea that overall, saturated and trans-fats are bad for you and unsaturated fats are good for you. Now it's time to determine where each is found so you can consume more of the latter and less of the former two.

Saturated fats are found in meat, milk, cheese, and other animal products.

Trans-fats are many times added to margarine, cookies, frozen pizzas, and fast food items, like fried chicken or French fries.

While fat provides more energy per unit weight than either carbohydrates or proteins for our body, as you can tell, too much of a good thing is actually quite dangerous. Especially if it's coming from fast food.

In summary, fats are more technically called lipids. Most of the different fats that we eat are called triglycerides, which are compounds that contain an alcohol called glycerol and three fatty acids.

Eating too much saturated and trans-fat leads to improper increases in the levels of cholesterol, a fat-like substance that helps to keep your body functioning properly, but too much of which can lead to heart disease. Specifically, these types of fat increase bad cholesterol, which is known as low-density lipoprotein, or LDL.

Good cholesterol, by the way, is known as high-density lipoprotein, or HDL, and trans-fats lower this kind of cholesterol.

Saturated fats are found in meat, milk, cheese, and other animal products.

Trans-fats are many times added to margarine, cookies, frozen pizzas, and fast food items, like fried chicken or French fries.

Once you watch this lesson in this entirety, you could:

Function of Fats in the Body | Fat Molecule Structure & Composition