Variables, or factors that can change, are measured using four scales. Learn the four scales: nominal, ordinal, interval, and ratio, as well as examples of when each scale is most appropriate. Updated: 09/22/2021
Create an account

So, how do you do your study? Where do you even begin?

Likewise, performance on a math test is a variable because it varies from person to person. Susie might do great on a math quiz, while Jonas fails it. Or, Susie might do well today but not as well tomorrow. Whatever the reason, scores on a math quiz change, and therefore, they are variables.

So, we know that our variables are eating breakfast and math performance. But, how do we measure them? There are four major scales (or types) of measurement of variables: nominal, ordinal, interval and ratio. The scale of measurement depends on the variable itself. Let's look closer at each of the four scales and what types of variables fall into each category. 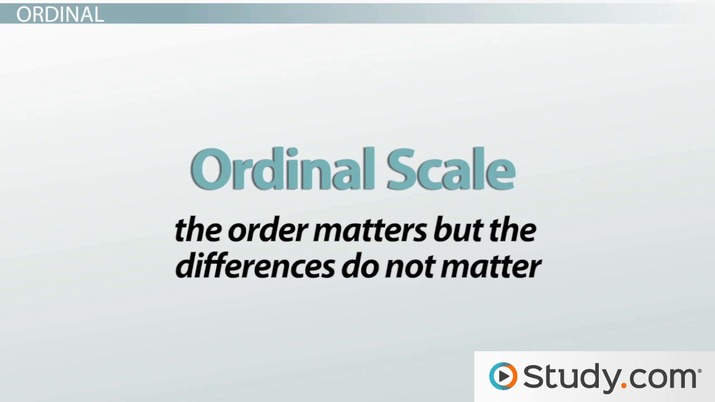 Coming up next: Types of Tests: Norm-Referenced vs. Criterion-Referenced

You might have noticed a difference in our two variables. While scores on a math test are reported as numbers, eating breakfast isn't numeric. A person eats a healthy breakfast, an unhealthy breakfast or no breakfast at all. These are not numbers but categories.

Jersey numbers have no value as far as telling us anything about the ability of the players; it's just a way to identify them. Other examples of variables measured on a nominal scale include gender, race and the number on pool balls.

Let's say that, instead of looking at grades on a specific math quiz, we want to look at the letter grades overall for the course for each student. So, Susie has an A, and Jonas has a D, and there are other students with Bs and Cs and Fs. In this case, the letters are not completely meaningless. Unlike football player jerseys, for example, we know that Susie is doing better than Jonas. But, how much better?

Have you ever filled out one of those customer service surveys that companies send out? They might ask a question like, 'How was your experience today?' and ask you to rate it on a scale of 1-10. Those, too, are ordinal. Other examples of variables measured on an ordinal scale include difficulty (hard, medium, easy) and the order of finishing a race (first place, second place, and so on).

When the order and differences between the levels of a variable matter, but they are not in a ratio, it is measured on an interval scale. Intervals are the distance between two things, so you can remember this because we are looking at the distance between levels of a variable. Temperature is a good example of a variable measured on an interval scale. If one kid eats a breakfast that is 100° and another eats one that is 50°, the difference between those two breakfasts is 50°. That tells us something about how far apart they are.

Likewise, if it was 70° last month and it is 35° today, we know how many degrees warmer it is. But, note that we wouldn't say, 'It's half as warm today as it was last month.' That doesn't make sense! That is why, while the differences are meaningful, the ratios are not.

But, what if the ratios are meaningful as well as the differences? Let's go back to our original idea. We want to look at the nominal variable of eating breakfast, and we also want to look at the scores of the students on a math quiz. If Susie gets a 90 on the test and Jonas gets a 45, we know that Susie did twice as well as Jonas. The scores, which are percentages, are ratios. That is, the numbers tell us how much of one thing we have in comparison to another thing.

Variables measured on a ratio scale are numbers where the order, differences and ratios are all meaningful. Think about it like this: if you can say, 'That's twice as much' about one number in relation to another one, then it can be measured on a ratio scale. Things like number of minutes in a commute, weight or height are all ratios. Susie can spend twice as long commuting, be half the weight or twice the height of Jonas.

You will be able to describe four major measurement scales used to identify variables and provide examples of each after watching this video lesson.

Demographic Changes from Fertility and Birthrates

How Personality Tests are Misused

Using the RIGHT, LEFT and MID Functions in Excel