Three major schools of music contributed significantly to changes in music during the Renaissance period. Discover and explore the influences of the Flemish School, the Virginalists, and the Venetian School, and some of the major composers of the era. Updated: 09/18/2021
Create an account

There is a saying that 'all good things come in threes,' and that was certainly the case for the musical schools of thought in Renaissance music. The Flemish, Virginalist and Venetian schools were no exception to the rule of threes, and their contributions from roughly 1450-1600 significantly changed music. In the thick of the Renaissance period, these schools brought new ideas that would quickly advance music to the next level melodically, instrumentally and harmonically. 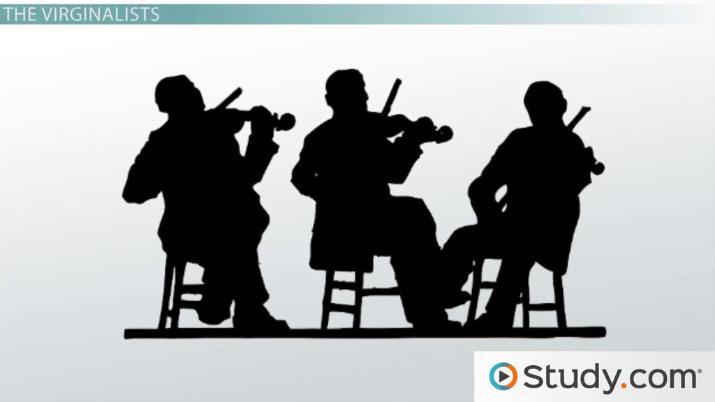 Coming up next: Instrumental Music of the Renaissance: Instruments, Compositions & Dance

The Flemish school was centered in the 'low countries,' now known as the Netherlands and Belgium. This was the first hot spot of new musical thought since the late Medieval Period. We can think of the Flemish school like the game Pac-Man. One of the first things you might notice when playing the game is how your little yellow circle is audibly chomping at a regular pace. The Flemish composers did this, too - not literally, of course.

In contrast to the late medieval style, where each word had very long melodic lines for each syllable, the composers opted to write melodies that mirrored the natural rhythm of spoken text. Like many Renaissance authors and painters, the Flemish composers turned to Greek and Roman influences, which inspired a focus on the emotional side of music. In order to achieve this, there was a marrying of words and music, where poets wrote more lyrically and composers wrote melodies specifically to imitate the words, following the rhythm of the words.

Instead, the melodies of each singing part would be weighted equally as concurrent melodies instead of just one melody and a few background parts. Namely, their use of imitative counterpoint, which is when you have simultaneous interlocking melodies that echo each other, heightened the intricacy of the songs. In counterpoint, each melody is independent, but together, they create harmony.

For example, a level one use of imitative counterpoint might sound like this, but as the songs developed, they became more and more complicated. With all of these crossing lines of music, tight rules developed of what was acceptable and what was unacceptable. This was particularly the case with harmony, especially with the addition of new notes and newly established theoretical ideas.

The rules kept everyone in line, kind of like the walls of the Pac-Man game. No one floats through the walls, and no composer was going to get away with too many unacceptable note combinations that lacked harmony, referred to as dissonant. They were careful to alternate the dissonances with more harmonically pleasing combinations of notes, which are referred to as consonant. While this sounds like an obvious choice, it was paramount to Renaissance development, as the equality of voices was a new idea for the time period.

Two notable composers of this school are Josquin des Prez and Johannes Ockeghem. Josquin was known for his brilliant use of imitative counterpoint and emotional sacred choral music. Ockeghem was known for his unique masses, in which he blended old and new styles. Some of his innovative compositional techniques included having singers sing the same music, but with a twist, such as a delay between the parts, or turning the notes upside down or backwards.

The two other schools of musical thought brought change to instrumental music. While instrumental music existed before this period, much of it was forgotten, as the music was usually played from memory or improvised instead of being written down. With the advancements made in printing and in music notation, more music was preserved and distributed throughout the educated public. During the Renaissance, music was educationally valued, and an educated person was likely to use music in their own homes.

This brings us to the Virginal. The virginal is an ancestor of the piano that used a quill to pluck the strings inside the instrument. It was small and quiet enough to play in one's home and became quite popular during the Renaissance. The school of composers who wrote music for the virginal are referred to as Virginalists.

The Virginalists were a group of English composers known for their clever use of musical themes. A musical theme is a small musical idea. You can think of the Mario games as an example. There are many different games involving the squat, mustachioed Italian plumber, but the theme of the games is basically the same - collect coins, kill bad guys, save the princess. Typically, the themes were simple melodies and were often based on dances or familiar songs.

The themes were manipulated to create variations, where the rhythm or pitches of a theme are modified to create a new, but still recognizable melody. If we say that Mario is the theme, then each suit uses a different variation of the theme, some allowing him to swim, fly or move in a different manner. They're still all Mario, but they look and function differently. Two popular Virginalist composers were William Byrd and Orlando Gibbons. Each were known for their inventive use of thematic variation.

The final school that started a significant trend was the Venetian school. Located in Venice, Italy, the Venetian composers were known for their innovations in instrumental music and creativity in choral music. The hallmark of the Venetian school is the polychoral style, in which a choir is physically split into two separate entities. This was started by Flemish transplant Adrian Willaert, who brought the polyphonic style of the Flemish composers with him when he moved to Venice.

As the music leader at the St. Mark's Church in Venice, Willaert was faced with an unusual problem: the church had two choir lofts, which created a delay in sound between the two choirs. Rather than scold the singers for not singing in unison, Willaert wrote music to accommodate the distance. So the choirs would sing contrasting lines of music in succession, in effect, taking turns singing. You can think of this style like a tag team. Just think how much easier things would be in a game if you could have two protagonists working together! The use of stereo sound quickly gained popularity in Venice and spread across Europe.

Written in 1597, his piece Sonata pian' e forte was an instrumental piece written with soft and loud dynamic markings, indicating the volume to be played. These two ideas were highly influential and acted like a new arsenal of tools for composition. So instead of a character just having just one or two swords to fend off enemies, they would have nearly infinite new combinations to apply.

With the cosmopolitan trend of travel in Renaissance Europe, the Flemish, Virginalist and Venetian styles spread quickly throughout the continent. The melodic emphasis of the Virginalists, the contrapuntal weavings of equally important voices from the Flemish and the polychoral and instrumental music of the Venetians filled sacred and secular music with new ideas that would foster new experimentation and development in the upcoming Baroque period.

When you have finished this lesson, you should be able to:

The Role of Music in Society & Culture