With such a variety of religious views in the world, what characteristics do sects share in common? We will look at what differentiates a sect from the larger religious tradition, and why members of a sect separate themselves in this way. Updated: 08/26/2021
Create an account

In sociology, a sect is the name given to a group of people who break away from a larger, established religious denomination because of a set of beliefs that differ in some key ways. While many views and practices of a sect will overlap with those of the larger group, other beliefs will be distinct enough to warrant a schism, or division between the groups.

Let's look at it this way: If we imagine that a religion is like a town, then a denomination or religious movement is like an established neighborhood within a town. A sect is like a block of people within a neighborhood that decides to break off on its own.

Using this comparison, imagine that in your neighborhood most people play loud music at all times of night, and you decide that enough is enough. You speak up that there should be a cut-off time for loud music and gather a few like-minded people who agree. Although the majority of people in your neighborhood (the denomination or movement) continue to play music during all hours, your group (a sect) separates itself and agrees to turn music down at night. Everyone still agrees that music is important to life and can be played during the daytime, but your group differs dramatically about the issue of music at night.

For sects that break away, the issues are much more serious than music waking them up at night. The areas of concern relate to topics of religious importance, such as the very meaning of life and the expectations of a higher power.

Catholicism is an example of a denomination of the Christian religion. It shares some overarching beliefs with other Christian denominations but has its own beliefs, traditions, and rituals as well. An example of a sect within Catholicism is the Community of the Lady of All Peoples, also known as the Army of Mary. This group's beliefs depart from the official doctrine of the church. 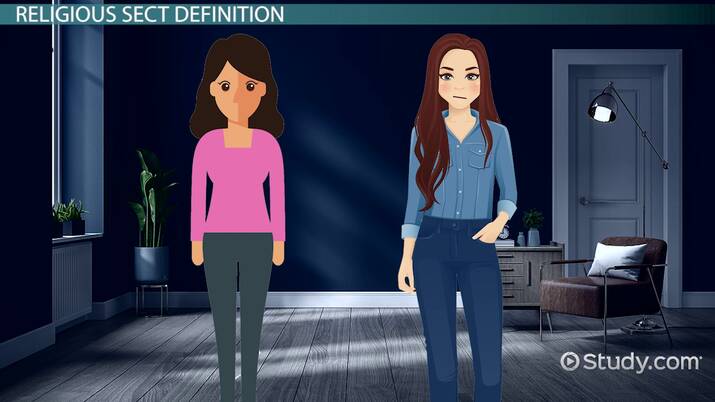 The Idea of One True Religion

Unless speaking of India or other areas where a diverse range of religious sects is part of the culture, the term ''sect'' in Western society is often associated with negative qualities. This is largely because sects hold a minority point of view and have beliefs that are not widely accepted by society.

Members of a sect often feel they are representing the one true version of the religion, with beliefs and practices that they feel better match the original intent of the faith. In our example of the neighborhood, let's imagine that your town values harmony and peace. Your group of like-minded people might feel that loud music breaks with this set of beliefs by being disturbing. Quieter nights seem to your group (your sect) to be better aligned with the original intent of your community (your religion). In your view, turning down music by 9pm is the only right way to live.

Members of religious sects also debate acceptable ways to live on a much deeper level than a subject like music volume. They are interested in where to draw moral boundaries between right and wrong and even how to worship their higher power appropriately.

In some cases, labeling a group a sect isn't a clear-cut affair. Due to the complexity of religious belief systems, not everyone may agree on what groups can be described as sects. Depending on who is doing the categorizing, different labels may be used to describe religious groupings.

For instance, in Judaism, Hasidism could be considered a religious movement, with Ger as an example of one of multiple sects within Hasidism. On the other hand, some may view the Hasidism as a sect of the larger Orthodox movement. In cases like these, scholars and the general public may debate what term to use to describe the tradition because of its rich history and complexity.

All right, let's take a moment or two to review. As we learned, a sect is a group of people that break away from the practices or beliefs of a larger religious denomination. This schism is what divides the sect from the wider group.

Members of a sect will often view their beliefs as keeping in line with a more ''true'' version of the religion. The larger group they are separating from may accuse them of heresy, which is basically deviating from the core beliefs of the religion, and they may also make accusations that the larger group is heretical. The term ''sect'' is often used by society to imply negative qualities, except in India or other regions where diverse traditions, or sects, are a part of the public culture.

What Is a Cult? | Characteristics of a Cult & Behavior

Religious Organization Types & Examples | What is a Religious Group?

Religion and Social Change in Protestantism and Liberation Theology

What Is Cohabitation? - Statistics & Effects

What Does Taboo Mean? Examples