The perpendicular bisector theorem asserts that the point of perpendicular bisection of a segment is equidistant from either end. Examine the proofs, and the converse of this theorem through the provided examples. Updated: 09/30/2021
Create an account

Let's talk perpendicular bisectors. These lines are immensely useful. Let's say you're an architect. I wanted to be an architect once. Then I realized it was less building cool models and more building regulations and codes. Anyway, let's completely ignore building codes here.

Here's some land. You're designing a skyscraper. The folks who hired you made two demands: it needs to go straight up and it needs to be in the middle of the land. Seems simple enough, right?

Say, do you know what you did? You made a perpendicular bisector. And it's not as simple as it seems. Consider the Leaning Tower of Pisa. Maybe it bisects the plots of land. But it definitely isn't perpendicular. Granted, who would visit the perpendicular tower of Pisa? These folks definitely ignored some building codes. 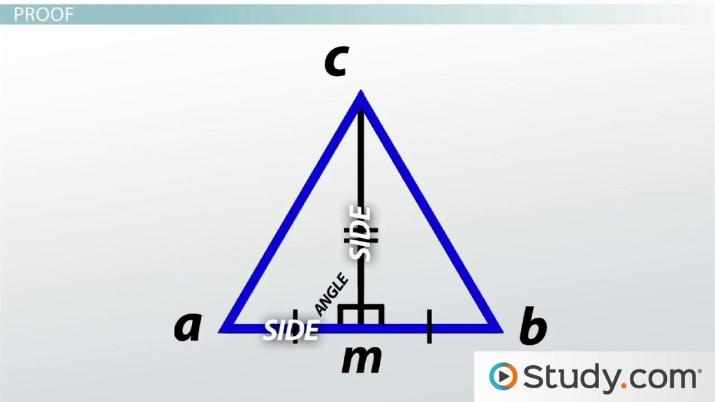 Try it now
Back
Coming up next: Angle Bisector Theorem: Proof and Example

But that's the theorem. Can we prove it? Here's a line, AB, and its perpendicular bisector. Let's label a point on the bisector C and the spot it hits AB as M.

We're trying to prove that the lines we could draw from C to A and C to B are congruent. Adding those lines gives us more than just a place to hang our laundry, it gives us two triangles. That'll be important later.

Let's start by stating that CM is a perpendicular bisector of AB. We're given that. And, well, that's all we're given. But trust me, that's all we need.

Okay, now let's state that M is the midpoint of AB. That's part of the definition of a perpendicular bisector; it would be the bisector part of that definition. CM bisects AB, so the place where it hits AB is the exact middle. That means that AM is congruent to MB.

Why? Well, that's what a midpoint is - the spot that divides a line into two congruent segments. It also allows us to have pretty, symmetrical gardens on either side of our tower, or parking. Nothing beats ample parking.

Next, let's state that angles CMA and CMB are right angles. No leaning tower here. This is the other part of the definition of a perpendicular bisector; it's the perpendicular part, of course.

So we have congruent sides and congruent angles. All that came from one given statement. Not bad. And we're not done yet.

Let's state that CM is congruent to CM. File that under 'obvious statements.' Our tower equals itself. Officially, it's the reflexive property.

Okay, look what we have now: side-angle-side. That's not just a geometric palindrome, it's a postulate: SAS. That means that triangle CMA is congruent to triangle CMB.

So the perpendicular bisector theorem is true. What about its converse? The converse of a statement is when you switch the hypothesis and conclusion. Instead of 'if p, then q,' the converse is 'if q, then p.'

Imagine the floors of our building floating in space, not connected to each other as a tower. Weird, okay. But go with it. To test our converse, let's start with a segment. This is segment AB. Let's add a point and call it X.

We know we can draw a line from X that's perpendicular to AB. We could do that from any point. Here's point Y.

We could do the same thing from Y. But Y isn't equidistant from A and B, so it's not on the perpendicular bisector. Plus, does the line that includes Y look like it bisects AB? No. I think Y comes from Pisa.

But what about X? Let's add lines XA and XB. Let's call the point where our line from X hits AB Z. If we were doing a proof like before, what would we know?

We know XA is congruent to XB since the hypothesis of our statement tells us that it's equidistant from the segment's endpoints.

That would enable us to state that AZ is congruent to ZB. That means that XZ does bisect AB, so X is on the perpendicular bisector of AB.

At the end of this lesson, you should be able to recall the perpendicular bisector theorem and test converse statements.

Congruent Triangle Proofs & Examples | How to Prove Triangles are Congruent

Congruence in Overlapping Triangles Proofs & Examples | What is Congruence?

Congruent Triangle Proofs & Examples | How to Prove Triangles are Congruent

Congruence in Overlapping Triangles Proofs & Examples | What is Congruence?