Get ready for some earth-shaking learning! In this lesson, you'll learn what a seismograph is and how scientists use a seismograph to learn things about earthquakes. Updated: 02/12/2020
Create an account

What Is a Seismograph?

Scientists can measure and record the seismic waves made by an earthquake using an instrument called a seismograph.

The word seismograph is the combination of two words. Seismos is a Greek word that means 'shaking,' and a graph is a way of recording something. So, 'seismograph' means a machine that records shaking.

The basic structure of a seismograph is pretty simple. A seismograph includes a base and a heavy weight hanging above it. The base has a rotating drum of paper, and the weight has a pen hanging down from it. When the earth shakes, the base shakes too, but the hanging weight and pen do not. The pen makes marks on the paper that record the shaking. This paper record is called a seismogram. 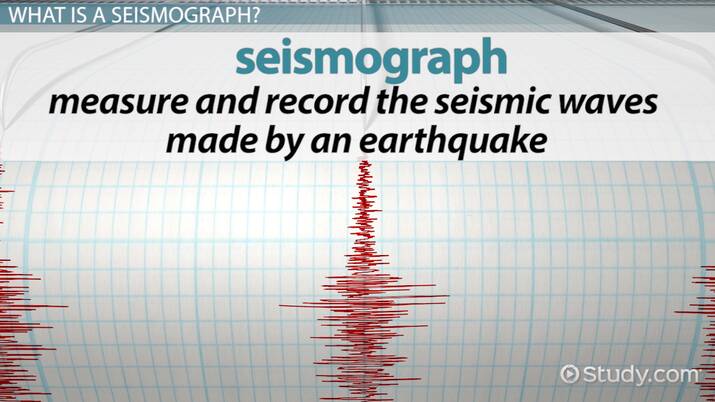 Coming up next: Earthquakes Lesson for Kids

When an earthquake hits, it sends out seismic waves, which are waves that travel through the ground, causing the earth to shake. Scientists can measure and record the seismic waves made by an earthquake using an instrument called a seismograph. A seismograph allows scientists to learn things about an earthquake, including when it happened, where it started, and how strong it was. An earthquake's strength is recorded using the Richter scale.

Seismograph Definition, History & Facts | What is a Seismograph?

What is Hibernation? - Definition & Facts

How Are Volcanoes Formed? Lesson for Kids