Michael has taught college-level mathematics and sociology; high school math, history, science, and speech/drama; and has a doctorate in education.

Imagine the following scenario. Mark notices that Janet, his new employee, seems to be spending a lot of time in the restroom and that she always appears to be a little 'out of it' when she returns to her desk. One day, while looking for a stapler, he instead finds a bottle of pills. 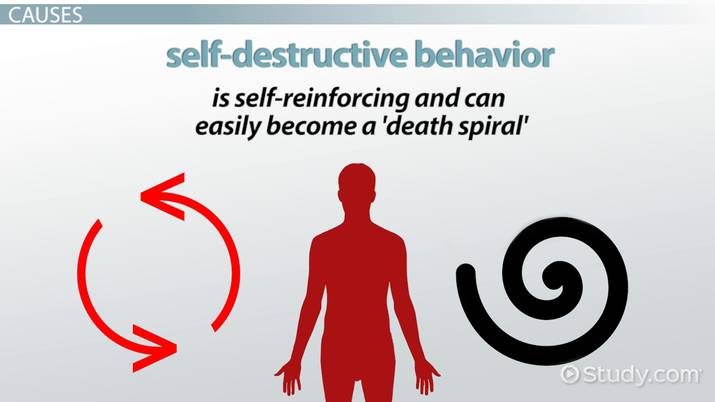 Identifying self-destructive behavior in yourself and others is a matter of keeping an objective point of view when it comes to what's really going on in a person's mind.

Let's go over some of the more common signs of self-destructive behavior, beginning with depression or pessimism.

The belief that life is bad, and will continue to go badly, is a sign of a self-destructive mentality. It is based on a deep belief that the person is not worthy of good things. At school, a student may only see the 'down' side of situations. At work, an employee, like Janet, may not believe anything positive will come of her efforts or try to push others away when they try to help.

Another sign of destructive behavior is avoiding responsibility. Self-destructive people tend to avoid opportunities and responsibilities. They have little faith in their abilities and try to take the easiest route when approaching a situation or task. Because self-destructive behavior involves excessive attention on the self, they tend to forget or be emotionally unable to do things, eventually becoming unreliable.

Hypersensitivity or emotional numbness is also a sign of self-destructive behavior. When people are prone to blow ups or seem indifferent, they are in a self-destructive mode. They may be trying to push others away, or they may be so involved in their own pain that they have no interest in what is happening around them. In either case, the behavior leads to negative results. This intensifies their feelings of unworthiness.

Self-destructive people exhibit compulsive or addictive behaviors. When people feel a compulsion to act in a certain way, such as driving past the cemetery every day at exactly five o'clock, the cause is usually an internal sense of failure or loss. Addictions, such as alcohol, nicotine, and substance abuse, gambling, sexual activity, and self-mutilation are typically signs of inward pain and insecurity, which must somehow be alleviated.

Some other signs include neediness, and a constant desire for recognition or approval. Self-destructive individuals may try to fill the emptiness within by seeking the approval or recognition of others, often through damaging behaviors, like overt sexual advances or loud and inappropriate laughter at a weak joke.

Finally, signs of physical damage may include:

Generally speaking, anything that seems 'wrong' or out of the ordinary in a person's appearance may be the result of self-destructive behavior.

Generally speaking, self-destructive behavior is a response to something that struck at a person's self-worth, often at a very young age, such as the loss of a parent or other key figure, a traumatic experience or failure accompanied by rejection. Any experience that affected a person's psychological foundation can produce a negative self-image that results in destructive behavior.

Because self-destructive behavior damages the body and/or mind, and because it tends to spiral, its effects tend to become more pronounced over time. Let's take a look at some of these effects, starting with damage to physical health.

Whether it's not eating, overeating, self-mutilation, unhealthy sexual activity, or abuse of alcohol, nearly all forms of self-destructive behavior tend to have a negative effect on physical health. The human body is designed to take quite a bit of abuse and bounce back; however, the self-destructive individual's mind tends to sabotage the natural resilience of the mind-body effect. Constant damage to the body over time tends to build up, producing increasingly dangerous health disorders.

Damage to the Mind

Long term effects of self-destructive behavior also include damage to the mind. The human mind is a goal-seeking mechanism, and the self-destructive individual provides the mind with an extremely dangerous goal: 'destroy yourself.' The attitudes that cause self-destructive behavior, combined with the feedback obtained from that behavior, tend to place the mind in an increasingly dangerous position. Minor depression can become a suicidal tendency, while escapism can lead to fracturing of the psyche. Negative attitudes tend to produce a nonproductive mental state, which disables much of the mind's ability to protect itself.

Damage to relationships is anther casualty of self-destructive behavior. Subconsciously, self-destructive individuals do not consider themselves worthy of healthy relationships, so their behavior tends to push others away or draw them into unhealthy situations. They feel deserving of abuse, so they seek abuse. They're starving for relief, so they demand attention. They stay drunk to avoid the pain, and end up pushing loved ones away.

Finally, self-destructive individuals may experience a loss of economic status. The same behavior that tends to sabotage relationships also tends to cause failure in school, work, and other areas that affect a person's financial future. Bills don't get paid. Absenteeism increases. Jobs are lost. Finances crash.

Self-destructive behavior is any deliberate activity that causes damage to a person's body or mind. It is generally caused by loss, pain, or other trauma, often occurring early in a person's life. Self-destructive behavior appears in many forms, including antisocial, addictive and compulsive behavior, self-injury, neediness, and irresponsibility and tends to become worse if indulged. It has many detrimental effects, including damage to body, mind, social life, and economic status.

The Relationship Between Asperger's & Anger

The Connection Between Low Self-Esteem & Bullying

The Importance of Counseling Theory and Models