Jenny has masters' degrees in public health and public administration.

The Seneca Falls Convention was a gathering of more than 300 individuals in Seneca Falls, NY, in 1848 that was organized by women to discuss women's rights in America. Learn about the leaders of the landmark convention, the participants, and the declaration of Sentiments that outlined the attendees' demands for change. Updated: 12/02/2021
Create an account

What would you do if you saw a group of people being treated unfairly? This was the question facing many men and women in the early 1800s. The Declaration of Independence, written in 1776 when the United States first proclaimed itself a country, says that ''all men are created equal.'' But back then, businesses, laws, and schools did not view every person equally. For example, many African-American men and women were slaves and treated like property. And women couldn't own a home or land.

Over time, some people began to feel this unfair treatment was wrong and came together to do something about it. On July 19th and 20th in 1848, over 300 men and women met at the Seneca Falls Convention in Seneca Falls, New York. This was the first large meeting focused on women's rights, and it started a movement that grew and resulted in real changes. 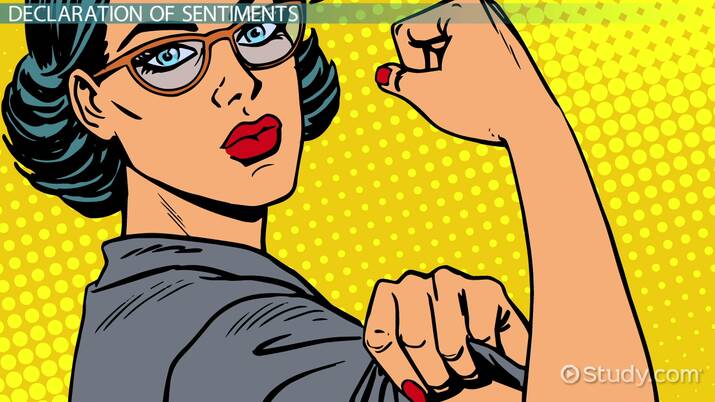 In 1840, a woman named Elizabeth Cady Stanton traveled to London to attend a meeting of abolitionists, or people who opposed the practice of slavery. While there, she met Lucretia Mott. Because they were women, they could not speak at the meeting, which inspired them to organize a women's rights movement. In 1848, Mott and Stanton along with Jane Hunt, Mary Ann M'Clintock, and Martha Coffin Wright organized the Seneca Falls Convention, which was held at the Wesleyan Methodist Church.

The meeting lasted two days; only women participated on the first day. Men participated on the second day. Frederick Douglass, a well-known African American writer and speaker and a leader of the abolitionist movement, was there. A newspaper article about the Seneca Falls Convention reported that there was a lot of ''spirited discussion'' at the meeting.

The women approved the Declaration of Sentiments, which uses some of the same language from the Declaration of Independence. It stated that, ''We hold these truths to be self-evident: that all men and women are created equal.'' Notice that it adds the words ''and women.'' It then listed different ways that women were treated unfairly. Two examples were that women could not attend college or teach law or medicine. The end of the declaration states that women would work hard to change their circumstances.

Let's review. The Seneca Falls Convention, led by Elizabeth Cady Stanton and Lucretia Mott, was the first large meeting of the women's rights movement. Thirty-two men (including the famous abolitionist Frederick Douglass) and sixty-eight women signed the Declaration of Sentiments, which advocated for equal rights for women. While not all participants were in agreement, suffrage, or women's right to vote, was included in the Declaration of Sentiments. The right of women to vote became an important part of the movement.